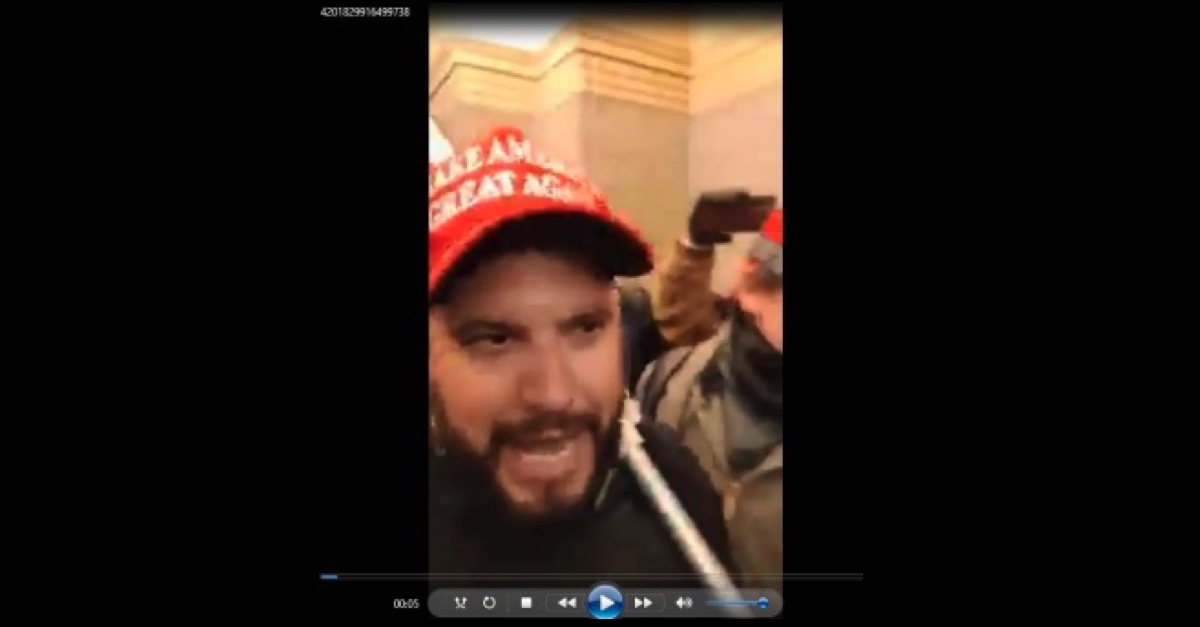 Gabriel Garcia appears in an image obtained by the FBI.

A man who taunted House Speaker Nancy Pelosi (D) after fighting his way inside the U.S. Capitol on Jan. 6 indicated he’d be willing to accept a plea deal for misdemeanor charges, but prosecutors say his “scary behavior” warrants more serious consequences.

Gabriel Garcia was arraigned on a superseding indictment Tuesday. He appeared via video.

According to prosecutors, Garcia was at “the very front of the crowd” that violently rushed a line of Capitol police on Jan. 6. Once the crowd broke through that line, Garcia recorded himself calling out for House Speaker Pelosi.

“Nancy come out and play,” Garcia said loudly while inside the Rotunda, according to the complaint. Later in the video, he again calls for “Nancy” before turning the camera on himself and saying “Free Enrique,” an apparent reference to Enrique Tarrio, the leader of the right-wing Proud Boys organization who was arrested in Washington on Jan. 4, 2021, the complaint says.

Garcia, a former captain in the U.S. Army and failed 2020 candidate for local office in Florida, uploaded multiple videos to Facebook that day.

Another video is around “five and a half minutes long and depicts an aggressive confrontation with U.S. Capitol Police officers, who are trying to prevent the crowd from advancing,” the complaint says.

“We just went ahead and stormed the Capitol,” Garcia says on the video. “It’s about to get ugly.”

At the hearing, Assistant U.S. Attorney Angela Buckner said that the government had extended a plea offer to Garcia. He hasn’t accepted the offer, Buckner said, adding that the parties have been in “fairly regular contact” regarding plea negotiations.

Buckner sounded unsure about whether prosecutors and Garcia would be able to reach an agreement on a plea deal.

Garcia’s defense attorneys said that Garcia was willing to plead to misdemeanors, similar to other Jan. 6 cases that have recently resolved.

“What differentiates this case that puts it on to the felony side?” Jackson asked.

“He wasn’t just part of the crowd of rioters that breached that police line, but he was at the front of the crowd,” Buckner said. “And then, after that line is breached with Mr. Garcia at the head of that line, he then goes up to the Rotunda, which is where he’s asking for Speaker Pelosi to ‘come out and play.'”

Buckner said that Garcia was doing more than just walking around the Capitol and taking pictures before leaving.

The complaint against Garcia provides a detailed timeline of his actions at the Capitol on Jan. 6:

GARCIA advances from the rear of the area to the front of the standoff, where members of the Capitol Police (“USCP officers”) are positioned in a line. Just as GARCIA approaches the line of USCP officers, an unidentified woman is yelling at an officer, “You’re not on our side!”

GARCIA continues his advance, shifting around and past individuals so that he is at the very front of the crowd and directly opposite the line of USCP officers. As he maneuvers to the front of the line, GARCIA joins the crowd’s chant of, “USA!”

At minute 1:34, a man tries to run through the line of USCP officers. The officers respond with force, which prompts GARCIA to shout, “You fucking traitors! You fucking traitors! Fuck you!” As the USCP officers try to maintain positive control of the man that just rushed the police line, GARCIA yells, “grab him!” seemingly instructing the individuals around him to retrieve the man from USCP officers. GARCIA is holding a large American flag, which he drops into the skirmish in an apparent attempt to assist the individuals who are struggling with the USCP officers.

USCP officers maintain control of the line, holding out their arms to keep the crowd from advancing. At least one USCP officer deploys an asp. GARCIA turns the camera on himself and offers tactical observations regarding the standoff.

At minute 3:26, GARCIA, who is still in extremely close proximity to the USCP officer line again yells, “Fucking traitors!” He then joins the crowd chanting “Our house!” At minute 3:38, GARCIA states, “You ain’t stopping a million of us.” He then turns the camera to the crowd behind him and says, “Keep ‘em coming. Keep ‘em coming. Storm this shit.” GARCIA chants with the crowd, “USA!”

Soon after, GARCIA stops chanting and begins speaking off camera with someone near him. At minute 4:28, GARCIA says, “do you want water?” Though unclear, GARCIA seems to be asking the person with whom he is speaking. GARCIA is so close to an officer that, as the camera shifts, the only images captured are those of the officer’s chest and badge.

Garcia, a member of the extremist Proud Boys group, had previously asked Jackson to change the terms of his pretrial release, saying that the ankle monitor he had to wear was “embarrassing” and interfered with his work as a roofer. Jackson denied this request.

At the end of Tuesday’s hearing, Jackson set a status conference for February 4, 2022.

Read the complaint against Garcia, below.