‘We Got Our Point Across’: Virginia Man Who Was Defiant After Breaching the Capitol Pleads Guilty to Trespass and Theft 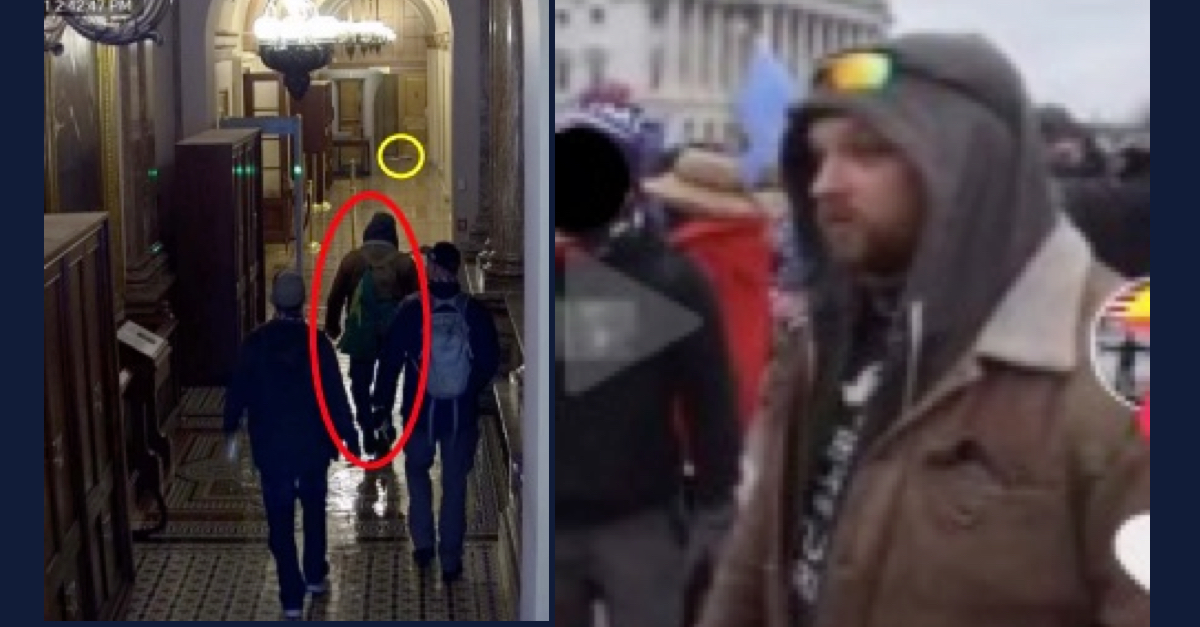 A Virginia man who was seen on surveillance video secreting papers scattered on the floor of a hallway inside the U.S. Capitol on Jan. 6 has pleaded guilty to storming the building and stealing government property.

Ryan Seth Suleski, 34, admitted Wednesday that he stormed the Capitol and swiped some papers he found on the floor of an empty hallway on the third floor of the building. He pleaded guilty to entering and remaining in a restricted building or grounds and theft of government property, both misdemeanors that carry penalties of up to one year in jail and a maximum $100,000 fine.

The plea gets Suleski off the hook for the significantly more serious felony charge of obstruction of an official proceeding of Congress, which comes with a potential 20-year prison sentence.

In pleading guilty before U.S. District Judge Randolph Moss, a Barack Obama appointee, Suleski acknowledged that he drove from his home in Norfolk, Virginia to Washington, D.C. the morning of Jan. 6 to attend then-President Donald Trump‘s so-called “Stop the Steal” rally, in which Trump continued to repeat the widely-rejected conspiracy theory that his loss to Joe Biden was the result of widespread voter fraud.

About halfway through Trump’s rally, Suleski recalled that Jan. 6 was the day Congress certified the election results, Assistant U.S. Attorney Kimberly Nielsen said as she read from the Statement of Offense.  That document includes the facts that form the basis for Suleski’s guilty plea.

With that realization, Suleski started to head over to the Capitol. Once he arrived at the Capitol grounds, court papers say Suleski climbed a wall and was able to see police using chemical agents to try to keep back the increasingly violent crowd. Suleski himself later said in a statement to investigators that he was shot with a rubber bullet by police who were trying to stop the rioters.

Suleski entered the Capitol at around 2:35 p.m., some 20 minutes or so after the initial breach. He walked throughout the building and tried to open several locked doors, Nielsen said. After eventually making his way to the third floor, Suleski spotted papers that were scattered on the floor at the end of an empty House Gallery West hallway.

According to prosecutors, the papers were outside the office of a “known Congressman.”

Suleski, who was walking in the abandoned hallway with two other people, approached the papers. He and one other person both picked up some of the papers and looked at them, but while the other person dropped them back on the ground, Suleski rolled them up and eventually put them in his backpack.

He left the building a few minutes later, taking the papers with him. He spent around 15 minutes inside, prosecutors say.

After leaving the building, Suleski was interviewed by the BBC.

“That is just not how things are done in this country,” the reporter said to Suleski.

“Lawlessness, storming buildings, even, and that is what happened today,” the reporter said.

“So, what happens now?” the reporter asked.

“I guess now we wait and see if they take us seriously because they saw how easily we were able to breach their defense,” Suleski answered.

Prosecutors say that on Jan. 6, Suleski posted some videos to TikTok detailing his activity at the Capitol.

In one video, Suleksi reportedly claimed that he was in the “initial wave of people that forced our way into the Capitol building.” He also said that he “got tear gas grenaded [sic]” and “got hit with some rubber bullets.”

In another video, Suleski notes that he’s “pretty sure everyone’s been watching the news about what happened in Washington, D.C. today.”

He said that he “got a CS gas canister dropped on” him, according to prosecutors.

“[T]oday was fucking nuts,” Suleski also said. “But, we got our point across. We showed how weak their defense was. And we showed Congress that America is tired of being fucking quiet and that we’re about that life.”