‘Texas Pleather’ Man Accused of Confronting Police Inside Capitol on Jan. 6 and Tipped Off to Feds by Ex-Girlfriend Pleads Guilty to a Felony 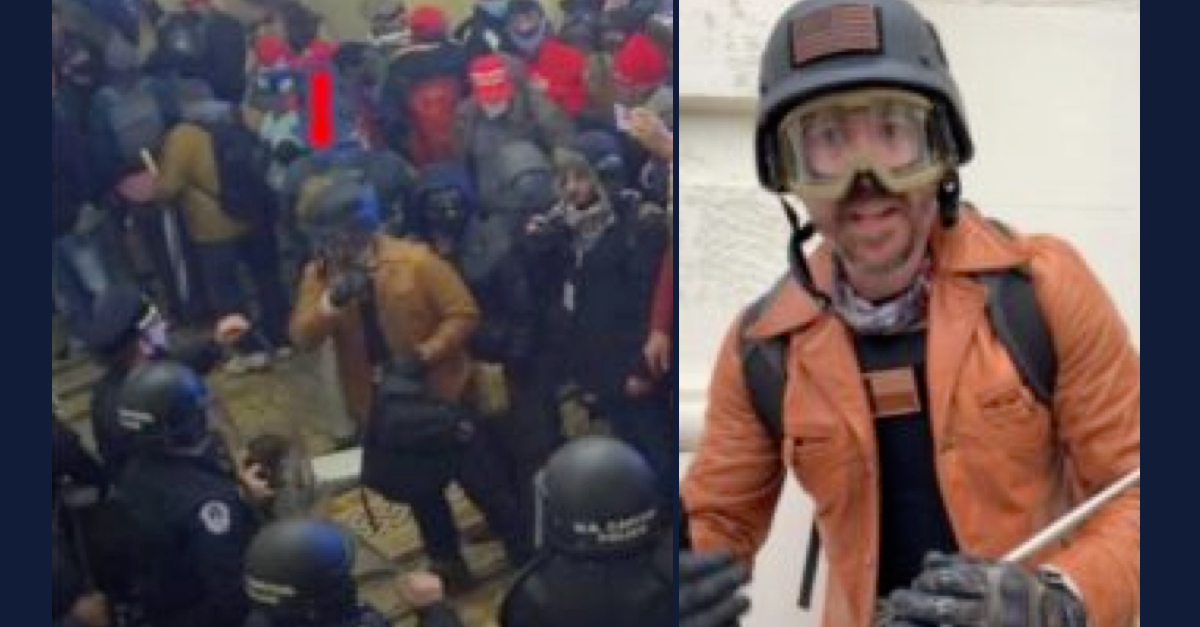 The Texas man who wore a conspicuous orange jacket to storm the Capitol on Jan. 6 — and was later identified to authorities by his ex-girlfriend — has pleaded guilty to a felony.

Geoffrey Samuel Shough, 38, admitted Tuesday to one count of civil disorder, a felony punishable by up to five years in prison and a fine of up to $250,000. According to his plea agreement, he started driving from Austin to Washington on Jan. 2, 2021. He planned to attend then-President Donald Trump‘s so-called “Stop the Steal” rally and to “protest Congress’s certification of the Electoral College” and Joe Biden’s win in the 2020 presidential election.

At the Capitol building itself, Shough was seen waving a large Texas flag and cheering as riotous Trump supporters overwhelmed police officers on the northwest steps of the building before proceeding himself to the Northwest Courtyard of the Capitol grounds, outside the

When Shough was arrested, court documents revealed that an ex-girlfriend, identified as L.T. in court filings, had confirmed his identity to federal authorities.

“L.T. stated that she had been dating Shough until the prior week, at which time they broke up. L.T. explained that Shough was visiting friends in Washington, D.C., on January 6, 2021, and had previously expressed an interest in attending the ‘Stop the Steal’ rally while he was in Washington, D.C.,” the probable cause affidavit said. “L.T. confirmed that Shough had a cognac-colored leather jacket.”

“Yes, this looks like him,” L.T. told investigators after seeing images of Shough at the Capitol.

“I Had Kmart Cutting Boards in There.”

Tuesday’s plea agreement hearing before U.S. District Judge Dabney Friedrich got off to a somewhat rocky start, with Shough pushing back on the description of his clothing that day contained in the Statement of Offense, despite having previously signed an acknowledgement of the document’s accuracy.

According to the Statement of Offense, Shough “wore a jacket that was orange-brown in color over a body armor vest with a Texas flag patch, a ballistic-style helmet with an Oath Keepers decal on the back and American flag on the front, goggles, hardknuckle gloves, and a tan pouch attached at his hip.”

Friedrich, a Trump appointee, asked Shough if that was all accurate.

“This [Statement of Offense] describes a body armor vest,” Friedrich said. “Are you saying it’s just a vest?”

“It was a vest made to carry body armor,” Shough replied.

“Were you not wearing body armor?” Friedrich pressed.

“I had Kmart cutting boards [in the vest],” the defendant said.

“You had Kmart what?” Friedrich asked, seeking clarification.

“I had Kmart cutting boards in there, like knife protection, in case they tried to stab me,” Shough replied.

Shough also denied that he attacked any police officers, although he ultimately acknowledged that he was cheering and waving flags as other rioters did face off against law enforcement trying to hold off the crowd.

“I’m Sensing Some Real Hesitation on Your Part.”

Friedrich almost put a stop to the plea agreement hearing Tuesday when it appeared that Shough wasn’t quite prepared to admit to a key part of the offense.

When Friedrich asked Shough if he had forcibly opened the Senate Wing door to the Capitol building and entered the building, Shough hesitated.

“I was pushed inside,” the defendant said.

“Did you not voluntarily enter on your own accord?” the judge asked.

“No,” Shough said. “There were people behind me who said ‘One, two, three, go!’ and pushed me in. I was right in front of the doors and consciously I did not enter on my own volition.”

“Once inside, did you stay inside on your own volition?” Friedrich asked.

“No,” Shough replied, saying he spoke with someone he believed was a police officer “in charge” of the situation, telling him he needed “to get Trump on the phone.”

“I told him to contact his superior officer and tell him to get the situation under control,” Shough said. “While this was happening, the doors to my right opened up and I walked out peacefully.”

Friedrich noted that the Statement of Offense — which Shough signed as acknowledgment of its accuracy — says that Shough was inside the Capitol for around 15 minutes and walked through the Capitol Crypt, past the House Wing Door, and through the Hall of Columns before exiting through the South Door of the building.

As this exchange continued, with Friedrich asking if Shough was suggesting that he was not in the Capitol of his own volition that day, defense attorney Katryna Spearman asked for a brief break to talk privately with her client.

After several minutes, Spearman and Shough returned. Spearman told the judge that Shough “has agreed to move forward with the facts as stipulated.”

“I’m just concerned because some of what you suggested here today is not consistent with what you agreed is true here [in the Statement of Offense] in terms of the facts as stated,” the judge said. “So let me ask you: did you intentionally enter and remain in the Capitol building?”

Shough was silent for several seconds.

“Yes, Your Honor,” he eventually said.

“Well, I’m sensing some real hesitation on your part, and I don’t want you to feel pressured to move forward today or to answer questions in a certain way if not consistent with the facts in this case,” Friedrich said.

“It took you a long time to answer that question,” Friedrich continued. “Can you help me understand what the truth is here? Is this just a difficult thing to admit, or do you really feel as though you didn’t forcibly enter the Capitol and intentionally remain in the Capitol for 15 minutes, walking from room to room?”

Shough, appearing to choose his words carefully, said: “I believe if this went to trial, Your Honor, I would say [that is] in the statement of facts that you’re talking about.”

“That’s not answering the question,” Friedrich replied, telling the defendant she needed answers to two questions: whether Shough “forcibly and unlawfully entered the Capitol” and whether he “intentionally travelled through the Capitol.”

“Is the answer to those two questions yes or no?” Friedrich asked.

After confirming that he obstructed, impeded, and interfered with Capitol police officers during a civil disorder, Shough once again appeared to hedge when asked if his presence at the Capitol that day contributed to the civil disorder that delayed the “conduct or performance of any federally protected function.”

“I believe the government could prove that,” Sough said.

In the end, Friedrich ended up finding Shough’s admission acceptable.

“Are you pleading guilty because you are, in fact, guilty?” she asked the defendant.

Although the civil disorder felony carries a potential five-year prison sentence, the plea agreement estimates that Shough would serve between eight to 14 months behind bars, and contemplates and estimated criminal penalty fine of $4,000 to $40,000 out of a possible maximum of $250,000.

Shough’s sentencing hearing will be held on Dec. 8.