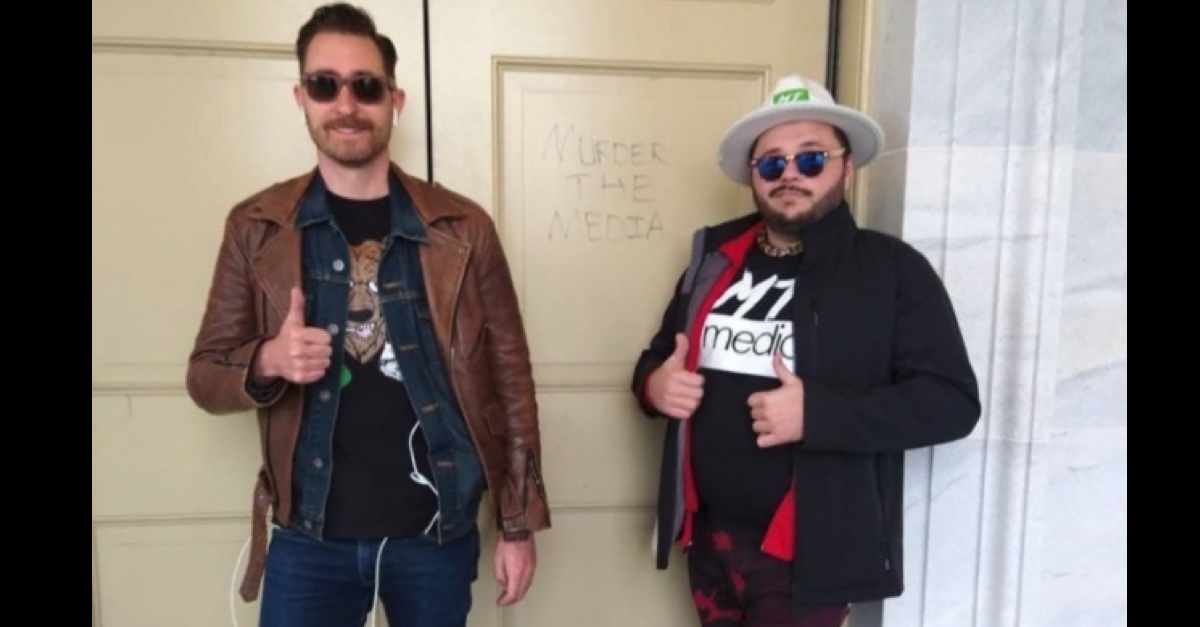 Two right-wing live-streamers operating under the name “Murder the Media”—who apparently photographed themselves posing in front of that chilling message scrawled on the doors of the U.S. Capitol—failed in their effort to throw out a serious federal charge carrying a possible 20-year prison sentence.

On Friday, the chief judge of the District of D.C. became the sixth member of her court’s bench to uphold the permissibility of the obstructing an official proceeding charge, presenting a united judicial front against a powerful prosecutorial tool against Jan. 6 defendants.

Chief U.S. District Judge Beryl Howell denied a motion to dismiss from co-defendants Nicholas Ochs and Nicholas DeCarlo, whose outfit’s name became a symbol of the pro-Donald Trump mob’s antagonism toward the press.

One year after the attack on the U.S. Capitol, the Department of Justice estimated that authorities arrested and charged 10 people on allegations related to assaulting a member of the media or destroying their equipment on Jan. 6.

The pair also posed with so-called “QAnon Shaman” Jacob Chansley, who has been sentenced to more than three years behind bars.

Ochs and DeCarlo were each charged with charged with seven separate crimes, including the federal obstruction charge and a conspiracy charge.

DeCarlo’s motion, in which Ochs joined, said that the obstruction charge doesn’t apply.

Judge: The Certification Process Is, In Fact, “Very Official”

Like several defendants who came before them, DeCarlo and Ochs said the statue didn’t apply because the certification didn’t qualify as an “official proceeding” under the statute, and the statute was unconstitutionally vague.

Howell, similarly, like several judges before her, didn’t buy they defendants’ arguments, and said as much at Friday’s hearing.

“Given the extensive amount that has already been said in these written opinions, I thought it would be more expedient and certainly no more than necessary for me to issue my ruling orally rather than adding a sixth written opinion to those already excellent opinions written by my colleagues on the issues presented in the defendants’ motion to dismiss,” Howell said.

Regarding the “official proceeding” argument, Howell, also an Obama appointee, said that the certification of the vote was in fact “very official,” as it is mandated twice in the Constitution and codified in federal law.

Howell also rejected the DeCarlo’s attempt to recast the certification process as two different proceedings, one where votes are counted and another where objections are addressed.

“Counting of the votes and the objection process are not two distinct phases as the defendants would have it,” Howell said after noting out that certification is an “integrated” proceeding because an objection to a vote must be resolved before it can continue. “It’s treated like a monolithic whole because it is one.”

As to the previously tried-and-failed argument that the word “corruptly” was unconstitutionally vague, Howell again deferred to her colleagues’ previous rejections.

“The Court agrees with these holdings and finds the reasoning highly persuasive,” she said.

Before issuing her ruling, Howell told DeCarlo’s attorney Robert Feitel that in the motion, he seemed to have overlooked key steps her client took before coming to the Capitol that would support the obstruction charge.

“One of the things you leave out … is the factual allegation that both defendants in this case agreed to travel to D.C., they raised funds via the internet to finance this travel, they publicized their plans to come to D.C. and it was all for the purpose of stopping, delaying, and hindering the certification of the results of the November 2020 presidential election,” Howell said.

“Those were a lot of different activities they engaged in even before they got to D.C. and went to the Capitol,” she added.

“The Steal Is For Now Stopped. You’re Welcome, America!”

Together, they run a right-wing streaming outlet called “Murder the Media.”

According to prosecutors, the two documented their time outside and inside the Capitol building on Jan. 6.

Ochs shared a picture of him and DeCarlo smoking inside the building to social media. 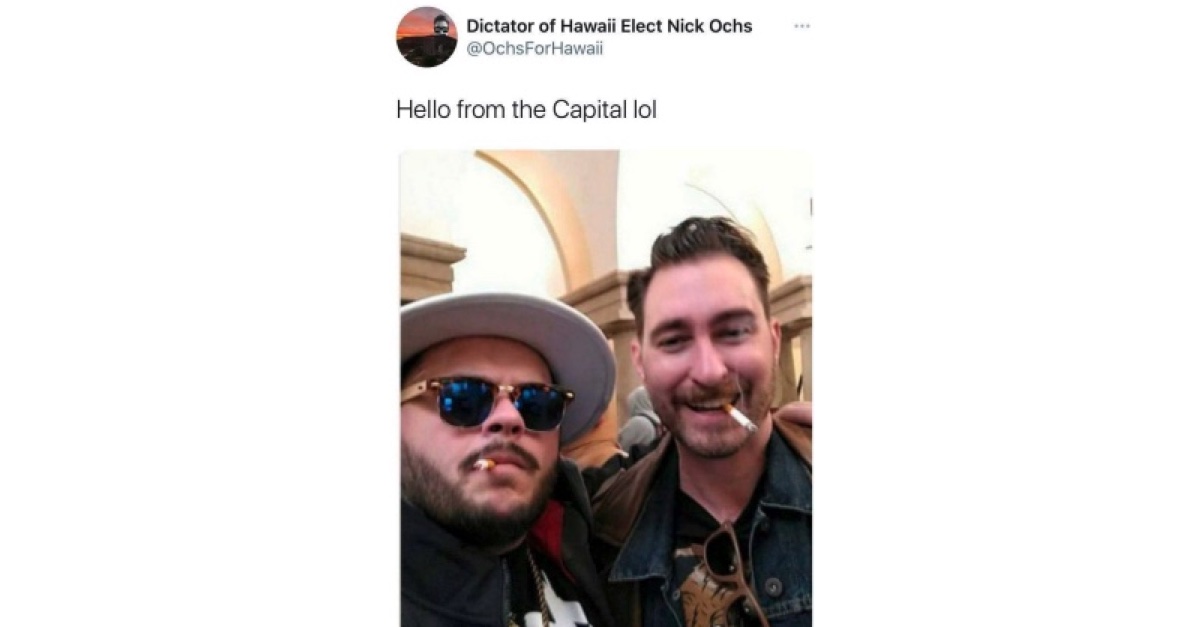 Ochs and DeCarlo are also seen in a grinning selfie with Chansley. 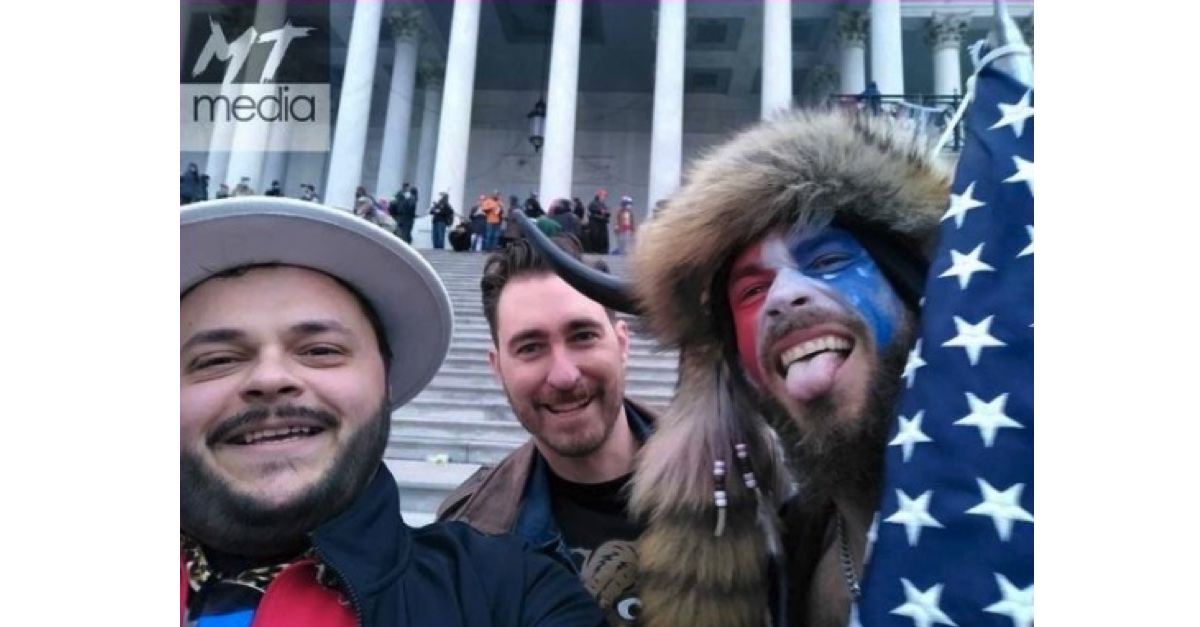 In the early morning ours of Jan. 6, DeCarlo and Ochs posted a video to YouTube entitled “BlackVill’d: Twas The Night Before REVOLUTION!!!!” The video appeared to show DeCarlo and Ochs walking in the streets of Washington D.C.

Prosecutors say that after leaving the Capitol on Jan. 6, Ochs posted a video to Telegram appearing to show him and DeCarlo walking in a residential area.

“The video, which Ochs appears to have recorded on a cell phone, shows Ochs and DeCARLO walking down a sidewalk in front of some row homes. Ochs states, ‘Viewers, . . . we have some good news: . . . We have just, uh, peeked through this window, and on the television the headline reads that Congress stopped the vote when we stormed the Capitol. And, as we’ve been saying all day, we came here to stop the steal,’ to which DeCARLO interjects ‘we did it.’ Ochs continues, ‘we were being sarcastic, but we didn’t know we were actually going to . . . .’ DeCARLO then asks, ‘Wait, you were being sarcastic?’ Ochs replies, ‘I was being a bit facetious,’ to which DeCARLO replies, ‘Oh no, that’s what I came down here to do. We fucking did it.’ Ochs then says words to the effect of, ‘It may resume, but the steal is for now stopped. You’re welcome, America!’ to which DeCARLO replies ‘we did our job. We did our job.'”

DeCarlo gave an interview to the Los Angeles Times on Jan. 13, in which he tried to pass himself and Ochs off as journalists.

“One [police officer] did ask us when we were going to leave,” he told the LA Times. “We said we’ll leave when we’re done reporting on it — when we’ve got our scoop.”

“DeCARLO claimed that he and OCHS were working as journalists, but DeCARLO is not listed as a credentialed reporter with the House Periodical Press Gallery or the U.S. Senate Press Gallery, the organizations that credential Congressional correspondents. The LA Times identified the ‘Thunderdome TV’ channel on YouTube as one of the media platform from which DeCARLO and Ochs operate (in addition to BlackVill’d). That channel has fewer than 600 followers and less than 6,000 views since its creation on YouTube in 2012. Your affiant has also learned that DeCARLO purports to be an employee of ‘MT Media News’, which stands for Murder the Media News.”

Howell set the next status conference in the case for Feb. 25.