Self-Proclaimed Proud Boys Member of Who Unleashed Chemical Spray on Police at Capitol on Jan. 6 Gets Time Behind Bars 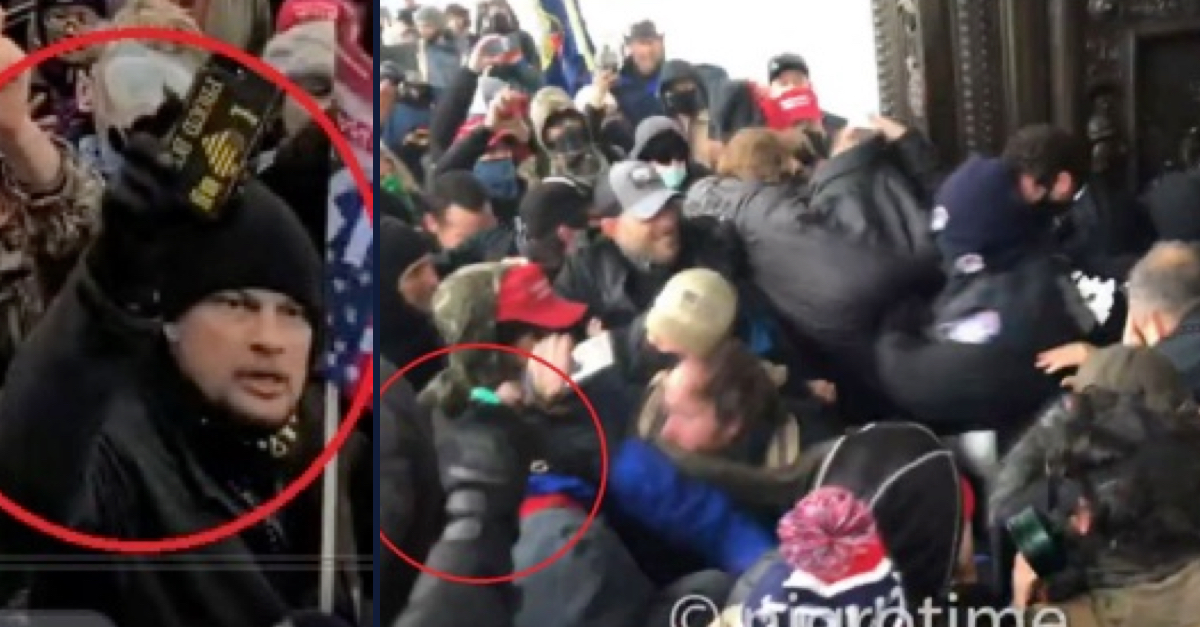 A California man who unleashed a can of chemical spray on police officers guarding the U.S. Capitol on Jan. 6 has been sentenced to two years behind bars.

Ricky Willden, 41, was seen on video among a crowd facing off against police at the East Columbus doors to the Capitol building. He was recording the chaos on his phone, which had a sticker that read “I [heart] my Proud Boy.” The Proud Boys are a self-described group of “Western chauvinists” who support an “anti-white guilt” agenda.  The Anti-Defamation League called the Proud Boys an extremist group with a history of hate, and the Canadian government lists them as a terrorist entity.

At around 2:35 p.m., as the mob of Donald Trump supporters — angry over the results over the 2020 election and spurred on by the former president’s ongoing, false allegations of widespread voter fraud — surged closer to the building, Willden deployed a can of chemical spray toward the officers. He then threw the empty can at the police line.

Around 30 minutes later, the East Columbus doors having been breached, Willden entered the building. Prosecutors say he stayed inside for around 18 minutes.

Later, Willden took to Facebook and boasted about his exploits at the Capitol.

“I think they got the message from everyone of all ages,” he wrote.

“FYI the cop who started his shit by mazing [sic] me and hitting my nuts playing stupid games, hope you enjoyed my special prizes,” Willden wrote in a separate comment.

He pleaded guilty in April to one count of assaulting, resisting, or impeding certain officers engaged in official duties. The maximum sentence is eight years in prison and a $250,000 fine; the sentencing guidelines range estimated a term of 24 to 30 months.

On Friday, U.S. District Judge Rudolph Contreras sentenced Willden to two years in prison, followed by three years of supervised release. He must also pay $2,000 in restitution toward the estimated $2.7 million in damage to the Capitol.

Estes argued that while his client did deserve a time of incarceration, he believed a more rehabilitative route would better serve the interests of justice. He emphasized Willden’s tumultuous upbringing, including having parents who were both addicted to drugs, an older brother who was killed in an accident while working on the side of a highway, and his own struggle with addiction and mental health challenges. He noted that Willden’s adulthood has been troubled as well: his father died by suicide in 2020, and following Willden’s participation in the Capitol attack, his wife filed for divorce and he no longer has contact with his children, one of whom has autism.

Contreras, a Barack Obama appointee, acknowledged these challenges before issuing his sentenced, but maintained that his actions warranted more time behind bars than what the defense had requested.

“His assault on the officers guarding the doors helped facilitate the breach of those doors,” the judge added.

Although Contreras ordered Willden to complete programs for parenting, drug abuse recovery, and mental health while on post-prison supervised release, the judge declined the defendant’s request to attend a Christian rehabilitation program based in Northern California to which he has been accepted.

Contreras said he would not approve the program because it prohibited the use of “psychological medications,” which he said contradicts the recommendations of medical experts.

Willden, who is from the Fresno area of California’s Central Valley, asked that he be housed in a federal facility in Florida.

“I put in a request with my attorney to be in Florida, if possible,” Willden told the judge. “Away from people where I grew up, [to] get a fresh start.”

Contreras expressed his approval of that idea.

Notably, Florida is the home state of Proud Boys leader Enrique Tarrio, who is charged with seditious conspiracy in connection with the Capitol attack. Prosecutor Angela Buckner said the FBI’s investigation confirmed that Willden has been an “active member” of the group in California for years and has been photographed with Tarrio.

The remaining counts against Willden, including additional assault charges, civil disorder, and several trespassing and disorderly conduct charges, were dismissed.