Oath Keepers Member Accused in Jan. 6 Capitol Attack Opts Out of Having a Lawyer, Tells Judge He Will Represent Himself 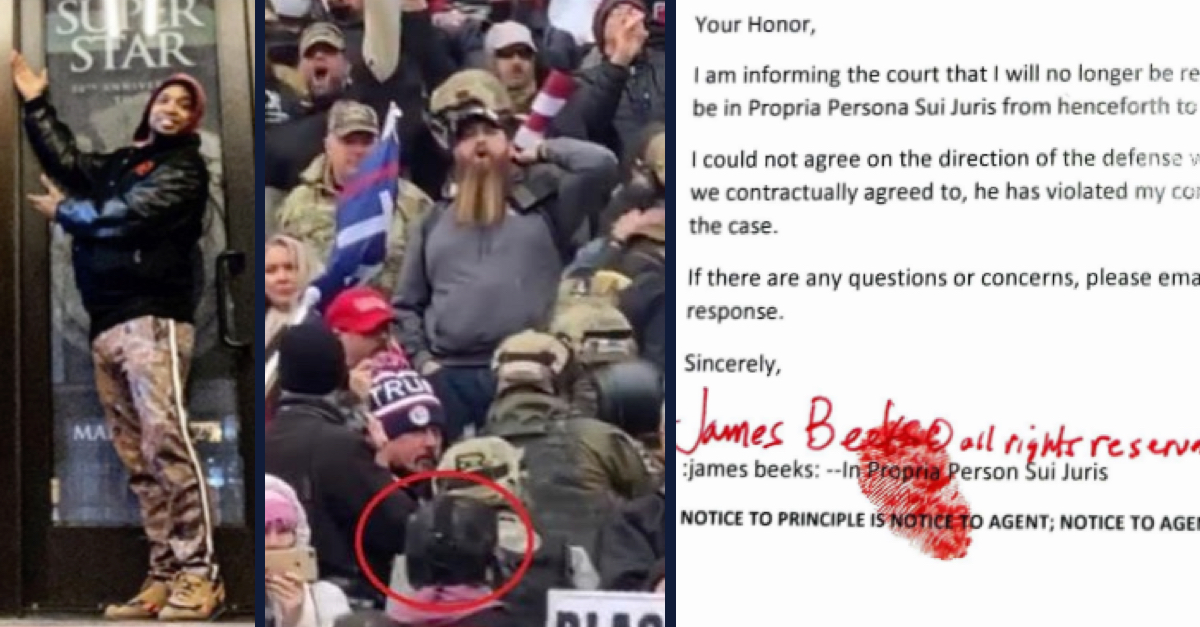 On the heels of a high-profile Jan. 6 trial that ended in the convictions of five members of the anti-government Oath Keepers group, including the group’s leader Stewart Rhodes, a defendant in a separate but related case has opted to represent himself, signaling an apparent reliance on so-called “sovereign citizen” talking points.

James Beeks filed a letter to U.S. District Judge Amit Mehta on Tuesday outlining his reasons for wanting his lawyer to withdraw from the case. Beeks is charged alongside 10 co-defendants with conspiracy, obstruction, and other crimes in connection with the violent Jan. 6 attack on the U.S. Capitol.

Beeks, a dues-paying member of the right-wing Oath Keepers group, is believed to have been part of the first military-style “stack” that forced its way through the riotous crowd outside the building. Other members of that “stack,” including Kelly Meggs, Kenneth Harrelson, and Jessica Watkins, were convicted of Jan. 6 felonies earlier this week. Surveillance footage appears to show Beeks inside the Capitol alongside scores of other Donald Trump supporters who pushed past police and broke into the building, forcing Congress to stop certifying Joe Biden’s 2020 electoral win and causing lawmakers and staff to either flee or shelter in place.

“I am informing the court that I will no longer be represented by the public defender Josh Uller and will be in Propria Persona Sui Juris from henceforth to handle the above-mentioned case,” the letter says (see here for more on sovereign citizens and the terms pro per and pro se). “I could not agree on the direction of the defense with the public defender. Additionally, on his bond that we contractually agreed to, he has violated my constitutional rights therefore, I had to release him from the case.”

At the top of the letter was what appeared to be a crest of sorts: the letters “JB” encircled by unidentifiable images whose meaning was not readily apparent, with the words “House of Edwards” and “Florida” written underneath. 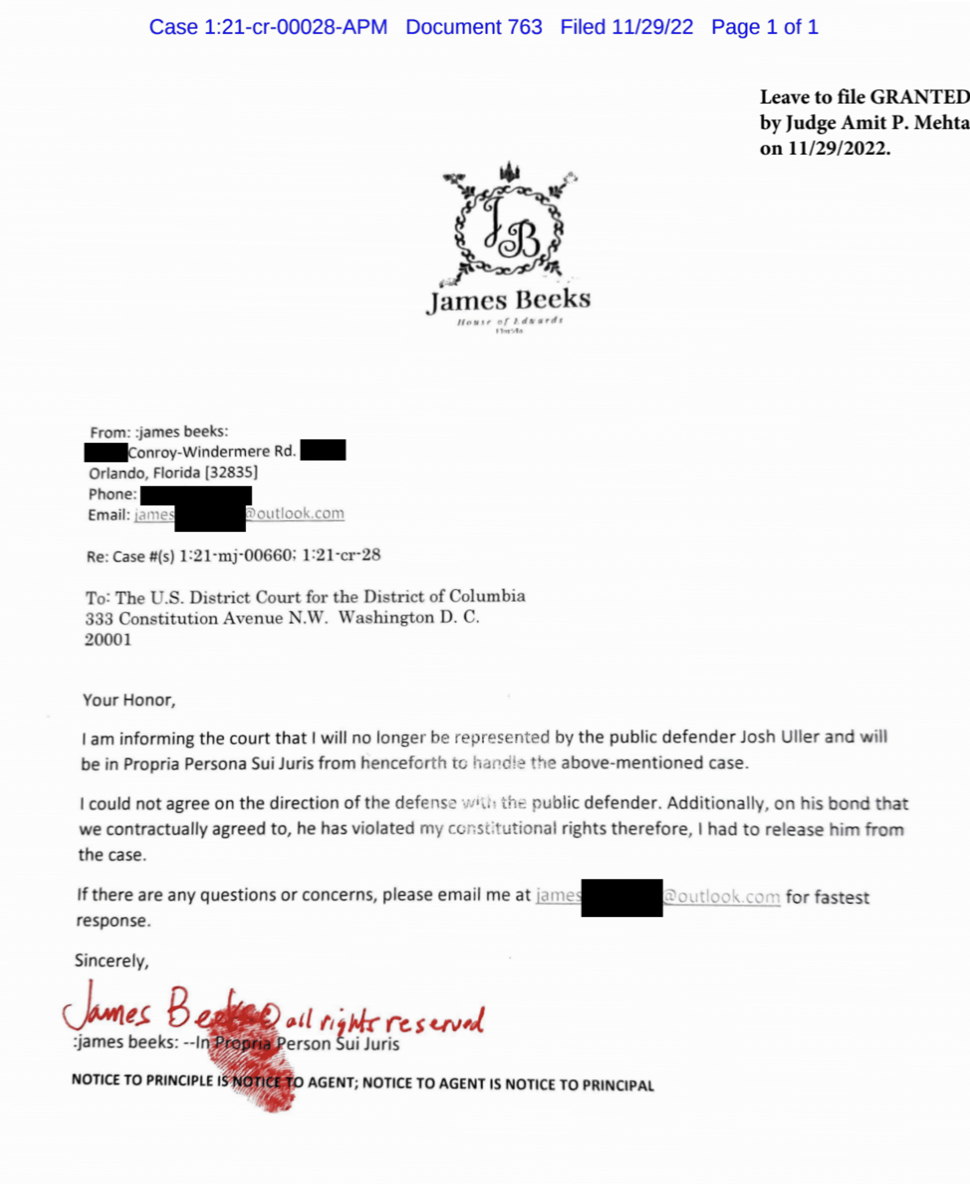 Beeks’ letter signals an alignment with the “sovereign citizen” movement, a loosely-organized collection of anti-government groups that share the overall belief that the existing U.S. government is illegitimate. According to the Anti-Defamation League, sovereign citizens “seek to ‘restore’ an idealized, minimalist government that never actually existed,” and to accomplish this, they “wage war against the government and other forms of authority using ‘paper terrorism’ harassment and intimidation tactics, and occasionally resorting to violence.”

The use of red ink and a fingerprint to sign the document is, according to experts, part and parcel of a conspiracy theory among so-called “sovcits” that each person has two identities: the “sovereign” or “flesh and blood” identity they were born with, and a secret, alternate identity created by the government called the “corporate” identity. According to this theory, using red ink indicates to the reader — in this case, Judge Mehta — that Beeks is a “true” person and not the “corporate” identity created by the government.

An accompanying motion from Beeks appears to further reveal an apparent alignment with the so-called “sovereign citizen” movement.

“Comes now :james beeks: (the Accused) by special appearance, an Aborigine Autochthon, 5/5ths realized Free Qualified Inhabitant, and Private Citizen of Turtle Island/Amaru-Inca (now known as America); who upholds the Great Law of Peace, a lawful de jure, jus sanguinis Preamble Citizen of the Florida Republic (1861-1865) in his own proper person sui juris pursuant to the unpurviewed 6th Article of the Bill of Rights, the 9th Article of Amendment to the Constitution for the United States (1781-1791) and other applicable provisions of law, knowingly and intelligently, with full awareness of the dangers of proceeding sui juris respectfully requesting a Faretta motion for the duration of this litigation process,” the motion said (all emphasis in original).

This particular paragraph is laden with sovereign citizen codewords and symbols. As explained by experts, the use of punctuation marks such as colons around one’s name is a way for sovereign citizens to “separate” their first and middle names from their last name, which they believe was assigned to them by the government. The phrase “Aborigine Autochthon” is an apparent reference to the small percentage of “sovcit” followers who are Black — a population that appears to have grown despite the movement’s racist and antisemitic roots, according to the Southern Poverty Law Center.

Beeks is far from the first Jan. 6 defendant to use “sovcit” talking points. One judge, Donald Trump appointee Trevor McFadden, actually engaged in a Bible-based back-and-forth with Pennsylvania pizzeria owner Pauline Bauer, who reportedly said while in the Capitol that she wanted to hang then-House Speaker Nancy Pelosi (D-Calif.) and who insisted before Bauer that she was in court by “special appearance.”

A motion to withdraw as counsel filed Sunday by Uller did not provide any details as to what Beeks alleged as violations of his constitutional rights. Uller did not immediately respond to Law&Crime’s emailed request for comment.

Beeks, a one-time Broadway actor who played Judas in a tour of Jesus Christ Superstar and, according to investigators, wore a jacket from Michael Jackson’s 1987 BAD world tour during the Jan. 6 Capitol riot, is not presently detained and, according to an October court filing, lives in the Middle District of Florida.

See the letter as filed here.