California Man Who Questioned the Existence of Ashli Babbitt Gets Jail Time for Jan. 6 Capitol Breach 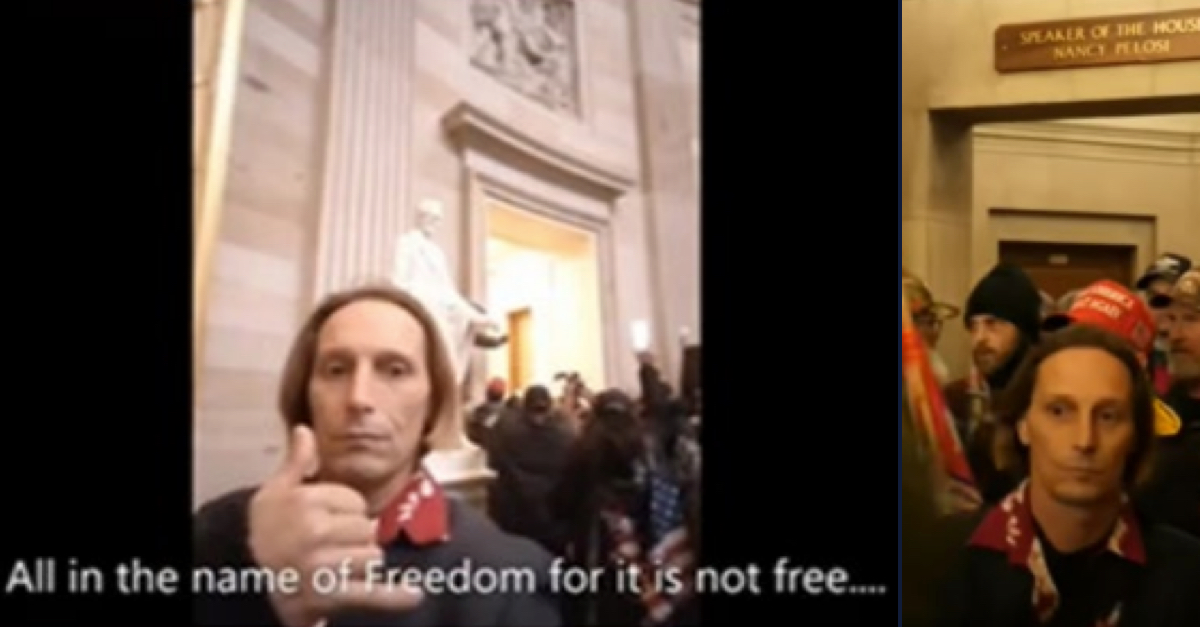 A California man who insists that the Jan. 6 attack on the U.S. Capitol was a peaceful protest has been sentenced to jail time and probation for his admitted actions that day.

Philip James Weisbecker, 51, had pleaded guilty in March to one count of parading, demonstrating, or picketing in a Capitol building, a misdemeanor punishable by up to six months in jail and up to five years of probation. On Monday, Senior U.S. District Judge Thomas Hogan sentenced Weisbecker to 24 months of probation and 30 days of intermittent confinement.

Weisbecker had traveled from San Diego, California, to Washington, D.C., on Jan. 4 in response former President Donald Trump’s call for supporters to attend his so-called “Stop the Steal” rally. At that rally, Trump and his allies — including so-called “coup memo” author John Eastman — repeated the unproven conspiracy theory that Trump’s electoral loss to President Joe Biden was due to widespread voter fraud.

According to the Statement of Offense, which was filed in connection with Weisbecker’s guilty plea, he joined the march to the Capitol after attending the rally.

After seeing law enforcement officers deploy tear gas into the crowd and watching rioters climb scaffolding that had been set up for Biden’s pending inauguration, Weisbecker ultimately entered the Capitol shortly before 2:30 p.m., minutes after Trump supporters first overwhelmed police and breached the building. He stayed inside for about an hour, entering through the Senate Wing Door and eventually entering the office suite of House Speaker Nancy Pelosi (D-Calif.).

He is not accused of entering Pelosi’s actual office, and he ultimately left the area after a few minutes.

“During this time, some of the Speaker’s staffers were sheltered fearfully in their offices while rioters were in the area,” the prosecution’s sentencing memo noted.

Weisbecker then made his way to the Capitol Rotunda, where he took pictures and video, including a video of himself. Like countless other Jan. 6 defendants, Weisbecker apparently couldn’t resist posting those images to social media.

“Between January 6, 2021, and March 18, 2021, defendant posted on his website videos and photographs of protesters unlawfully climbing scaffolding and entering the Capitol,” the Statement of Offense said. “Defendant also posted a photograph or still image of himself standing in the Capitol, right thumb up and right pinky finger extended.”

He stayed inside the building for about an hour.

Weisbecker was eventually identified as a potential Capitol rioter during an interview with U.S. Customs and Border Patrol agents as he was crossing the U.S.-Mexico border, as he apparently did regularly for his work in construction. After CBP agents searched Weisbecker’s phone during a stop on Feb. 23, 2021, he admitted that he had indeed entered the Capitol on Jan. 6.

“After being advised of and waiving his Miranda rights, the defendant admitted that he entered the United States Capitol and was in the office suite of the Speaker of the House of Representatives and in the Capitol Rotunda,” the Statement of Offense said.

At Monday’s sentencing hearing, Hogan readily acknowledged that Weisbecker didn’t engage in any violence while at the Capitol, but said he didn’t fully believe his claims that he was remorseful for what he did that day.

“I think you’re upset or hurt because your status as a citizen [is now under] strict oversight by government,” Hogan, a Ronald Reagan appointee, told Weisbecker, who claims he has been severely restricted and subject to extensive questioning and searches since Jan. 6 while traveling and crossing into Mexico — something he says he regularly did with no problems before Jan. 6. “You have been hurt by that. You’ve lost friends, family and maybe some work because of this display, and that I take that into account – the punishment you’ve incurred because of your actions.”

“At the same time your remorse is somewhat to me diminished because of the videos you played,” Hogan also said, noting that Weisbecker’s insistence that the riot was peaceful contradicted videos that he himself had taken.

Hogan also sounded skeptical of Weisbecker’s claim that he was a “citizen journalist” simply recording the situation.

“You claim to be a citizen journalist,” Hogan said. “Your real occupation is construction.”

Weisbecker, a freelance construction estimator who is apparently prone to believing conspiracy theories, had previously said that Ashli Babbitt, who was killed by police as she apparently tried to enter the Speaker’s Lobby, did not exist, according to a report in the San Diego Union-Tribune.

Hogan also ordered Weisbecker to pay a $2,000 fine. Under the parading and picketing charge, he faced a maximum potential fine of $5,000.

Prosecutors had requested a sentence of 90 days in jail followed by three years of probation and 60 hours of community service. Weisbecker had asked for a sentence of time served. He had spent seven days in detention after being arrested before getting out on bond.

Pursuant to the plea agreement, Weisbecker will pay $500 in restitution toward the estimated $2.7 million in damage to the Capitol.