Arkansas Man Who Told Feds He Urinated on a Capitol Column on Jan. 6 Pleads Guilty to Misdemeanor 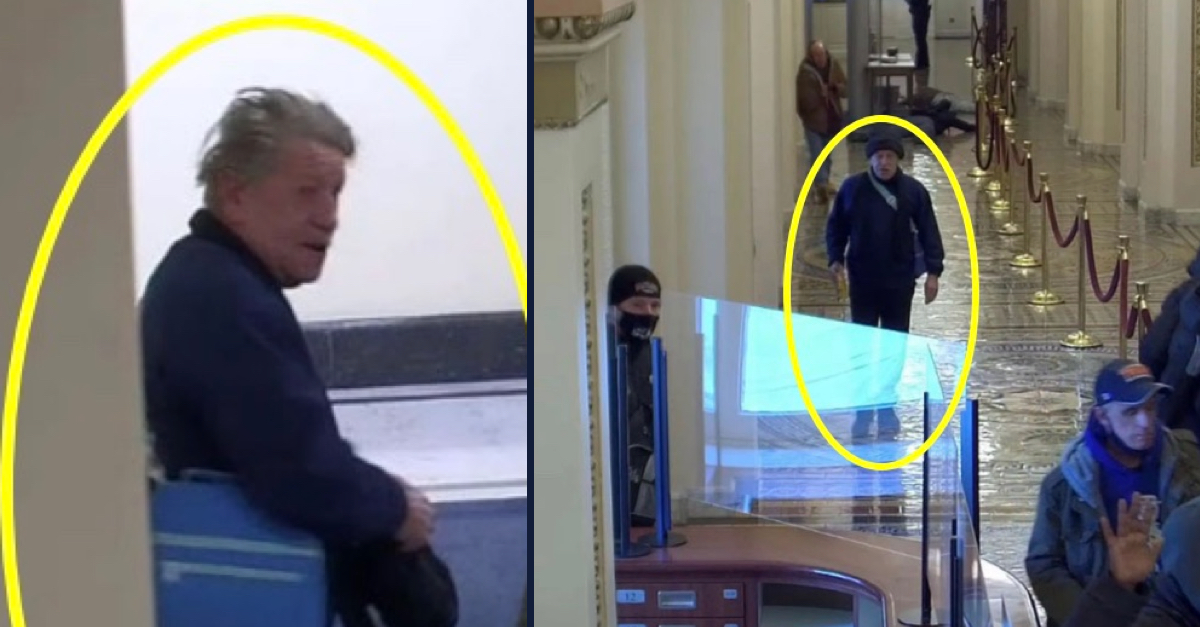 Robert “Bob” Snow is seen on surveillance footage inside the U.S. Capitol on Jan. 6 (via FBI court filings)

An Arkansas man who told federal investigators that he urinated on a column inside the Capitol on Jan. 6 has pleaded guilty to a misdemeanor.

Robert “Bob” Snow, 78, admitted to parading, demonstrating, or picketing inside the Capitol building. The charge is punishable by up to six months in jail and a $5,000 fine.

When investigators interviewed Snow in February of 2021, he “voluntarily confirmed his identity” and admitted to being inside the Capitol building on Jan. 6, according to the government’s complaint.

According to prosecutors, Snow entered the Capitol through the Senate Wing Door on Jan. at around 2:15 p.m., shortly after the violent crowd of Donald Trump supporters had overrun police and breached the building in an attempt to halt Congress’s certification of Joe Biden’s 2020 presidential election win.

Snow, who was carrying a cooler while he roamed the Capitol, was seen on surveillance footage “waving people into the building and patting people on the back as they enter,” according to court documents. He was also seen in the Rotunda and in the House Gallery hallway.

Prosecutors say that Snow spent more than 30 minutes inside the building.

“Once inside, Snow walked upstairs through multiple locations including the Rotunda and Statuary Hall and then made his way up another set of stairs to the third floor,” said the Statement of Offense, which outlines the behavior to which Snow is pleading guilty.

While inside, the Statement of Offense says, Snow complied with police officers’ instructions to get on the floor, and allowed himself to be searched for weapons.

Notably, Snow’s plea does not acknowledge what he apparently told investigators during a second interview in November.

At that time, Snow identified himself on CCTV footage and gave agents the cooler he carried while in the Capitol. He also told the agents that he had complied with orders from police officers to lie prone on the ground and submit to a search.

Snow said that while he left the building shortly before 3:00 p.m., after being searched by law enforcement and told to exit, he re-entered shortly thereafter.

“He told Agents that when he re-entered the Capitol Building he urinated on a column inside an area he thought to be a cafeteria and then exited once more,” the Statement of Facts attached to the government’s complaint said.

Thursday’s plea agreement hearing was fairly straightforward, with Snow appearing to understand the elements of the charge and admitting that the government would be able to prove those elements in court.

“Are you entering this plea of guilty bc you are in fact guilty?” U.S. District Judge Timothy Kelly asked.

Snow was charged with the standard collection of misdemeanors against Jan. 6 defendants, including disorderly conduct and entering and remaining in a restricted building or grounds. Those charges will be dropped when Snow is sentenced.

Snow’s sentencing was set for July 7.

Although Judge Kelly said he prefers to hold sentencing hearings in person, Snow’s lawyer Christopher Macchiaroli said that he intends to file a motion to have the hearing held remotely, citing his client’s medical and financial concerns.

Kelly, a Trump appointee, said that he prefers to have sentencing hearings in person, but will consider Macchiaroli’s motion. He also indicated that if the government was not inclined to request incarceration, he might be more inclined to allow sentencing to be held remotely.