Maine Man Spotted with Fur Pelt and Unstrung Bow on Jan. 6 Convicted of All Charges, Including 7 Felonies, Following Bench Trial 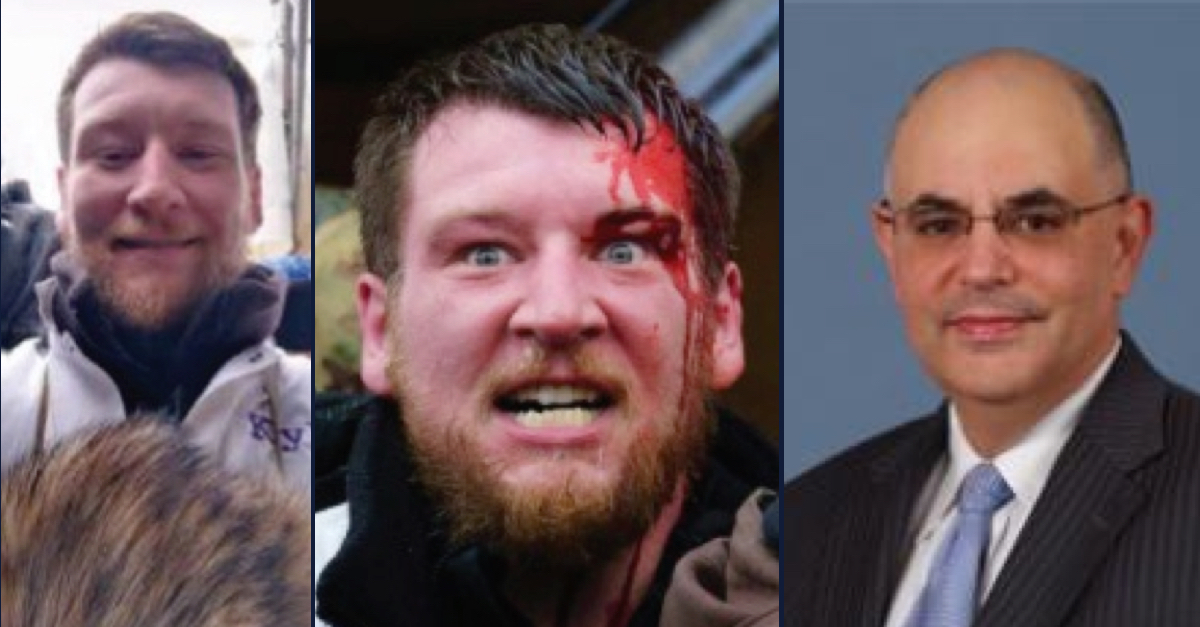 Kyle Fitzsimons is seen in the crowd at the Capitol on Jan. 6 (left, middle, via DOJ court filing). U.S. District Judge Rudolph Contreras (right, via U.S. District Court for the District of Columbia).

A 39-year-old Maine man accused of attacking a group of police officers has been convicted of 11 charges in the Jan. 6 attack on the U.S. Capitol building.

Fitzsimons was charged with civil disorder, obstruction of an official proceeding, and assaulting, resisting, or impeding officers during the melee outside the Capitol that day, when scores of Donald Trump supporters, angry over the results of the 2020 election, overwhelmed law enforcement and breached the building. Congress was forced to stop certifying Joe Biden’s electoral win as lawmakers evacuated or sheltered in place for hours after rioters forced their way inside.

Contreras’ decision comes more than a month after the government rested its case on Aug. 19. According to a report from local CBS affiliate WUSA, the judge had asked the parties to submit legal briefings on two issues: the authentication of open source videos submitted by the government, and Fitzsimons’ claim that when he threw his bow at D.C. Police Officer Sarah Beaver.

At the time, Contreras indicated that he would issue a ruling by Labor Day, WUSA reported.

Fitzsimons had previously waffled on whether to have a jury trial or a bench trial before Contreras, a Barack Obama appointee. It’s unclear, however, whether Fitzsimons would have fared better before a jury: prosecutors have won verdicts in all Jan. 6 jury cases so far, and all but two bench trials have similarly resulted in full convictions. Only U.S. District Judge Trevor McFadden, a Trump appointee, has issued acquittals — one partial and one full — in cases where defendants had been charged with misdemeanors.

One of the officers Fitzsimons is accused of assaulting, U.S. Capitol Police Sgt. Aquilino Gonell, testified at trial. He said that he was able to identify Fitzsimons — who was wearing what has been described as a butcher’s jacket with “Kyle” emblazoned in blue near the left-side lapel — because no one else was wearing a white jacket at that time.

“According to the government’s evidence, on Jan. 6, 2021, between 3:45 and 4:30 p.m., Fitzsimons was illegally on the Capitol grounds and among a crowd of rioters confronting law enforcement officers at the tunnel area of the Lower West Terrace of the Capitol Building. He was wearing a white butcher’s jacket and a fur pelt and carrying an unstrung bow,” the U.S. Attorney’s Office in D.C. said in a press release on the verdict. “While in that area, Fitzsimons committed five assaults against law enforcement officers over an approximately five-minute span.”

Gonnell testified that Fitzsimons grabbed his riot shield shoulder strap, forced him to the ground, and tried to drag him into the crowd. He said that as a result of his injuries, he is in the process of being “medically retired” from his job.

Fitzsimons’ defense attorney Natasha Taylor-Smith, a federal public defender, cross-examined Gonell extensively, implying that he was overstating his injuries and, to the extent that he was hurt that day, it was due to the actions of another rioter, and not her client.  She also asked him several questions about his media interviews and appearances, as well as the fact that he is in the process of writing a book, and inquired whether he was paid for any of his media appearances.

Gonell, who has also testified before the House committee investigating the Jan. 6 attack, acknowledged that he had received some compensation for some of the appearances, but the amount he received was significantly less than the cost of his injuries.

The implication of Taylor-Smith’s line of inquiry was clear: Gonell was not only overstating his injuries, but he was benefitting financially from doing so.

Taylor-Smith also implied that Gonell believed he was entitled to more deference than the crowd at the Capitol had shown police that day.

“He really believes that his position as a police officer gives him status,” Taylor-Smith said of Gonell, according to WUSA. “He wants to be revered.”

Taylor-Smith took a similar approach in the motion that Contreras had requested regarding Fitzsimon’s claim that he was defending another rioter that day.

“A Metropolitan Police Department Officer, identified as Lieutenant Bagshaw, was using excessive force against a woman wearing a red sweater by beating her over the head with a baton and closed fists,” Taylor-Smith wrote in the brief. “In response to the display of excessive force and calls for help, Mr. Fitzsimons threw an unstrung bow towards the officer in order to distract him. Mr. Fitzsimons reasonably believed that the woman faced a present threat of death or serious injury and acted lawfully in response to the threat.”

The government, in turn, argued that Fitzsimons was not close enough to the interaction between Lt. Bagshaw and the woman to have formed a reasonable belief that the lieutenant was using excessive force.

Contreras set Fitzsimons’ sentencing for Feb. 17, 2023 — more than two years after his Feb. 4, 2021 arrest. DOJ noted that Fitzsimons technically faces more than 90 years in prison, but the lengthiest sentence handed out so far to any defendant is 10 years.