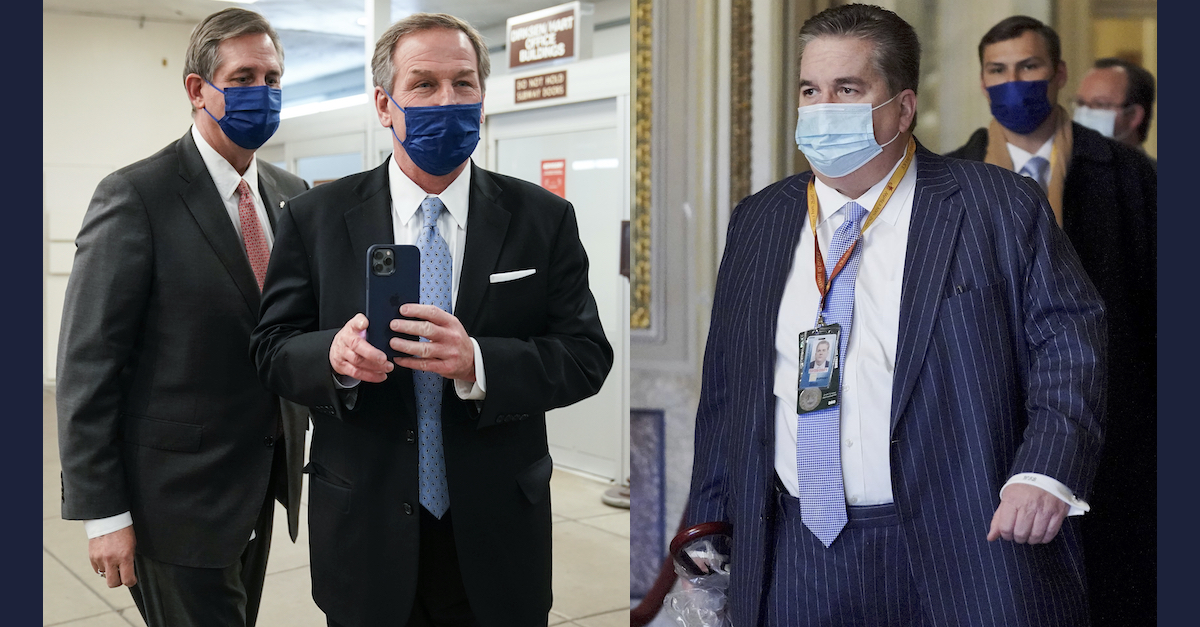 Michael van der Veen, onetime Pennsylvania Attorney General Bruce Castor (who works at van der Veen’s law firm), and William Brennan (of Brennan Law Offices) worked alongside other lawyers to secure the 45th president’s acquittal before the U.S. Senate on one count of incitement of insurrection over the Jan. 6, 2021 attack on the U.S. Capitol Complex.

Now, the trio will test their mettle with the Manhattan District Attorney’s Office in another marquee case involving Trump.

“It will be like bringing the old band back together again,” van der Veen told The Legal Intelligencer‘s Justin Henry earlier this week. “As a criminal defense lawyer, you want to be involved in cases that are of significance and are professionally challenging. This is certainly one of those cases. This will be one of the most important cases in our country this year. It’s an opportunity to try a case on stage in Manhattan and an opportunity that I couldn’t pass up.”

Van der veen was a prominent figure who frequently made waves during Trump’s second impeachment trial.

After Democrats reportedly cited Valentine’s Day vacation concerns as justification for refusing to call witnesses, van der Veen excoriated the former president’s prosecutors and said he needed to conduct “over 100 depositions” during a speech that landed him in the headlines.

Aside from the linguistic hurdles of his own making, during the then-president’s defense, van der Veen also said that the proceedings against Trump were “a hypocrisy” filled with “dishonesty” and “insincerity.” By way of example, the attorney argued that comments previously made by then-Senator Kamala Harris were “closer to the actual definition of incitement than anything President Trump has ever said or done, never mind what he said on the 6th.”

Those claims were of a piece with how van der Veen represented his twice-impeached client during his second such trial.

“The article of impeachment now before the Senate is an unjust and blatantly unconstitutional act of political vengeance,” van der Veen argued while beginning the defense’s case in chief. “This appalling abuse of the constitution only further divides our nation when we should be trying to come together around shared priorities.”

Also re-joining the band of lawyers from the incitement-themed impeachment trial is Castor, who was sharply criticized for his performance by retired Harvard Law professor Alan Dershowitz – who represented Trump during his first impeachment and offered his services for the second go-round.

“The American people are entitled to an argument — a constitutional argument,” he added before complimenting one of his former students on the Democratic side of the quasi-legal presentation.

Brennan was more of a behind-the-scenes player during Trump’s second impeachment defense, but he remembered the experience fondly after the fact in an interview with the North East Times.

“This was history unfolding before our eyes,” the attorney told the paper in February 2021.

“This was in no way some type of partisan political mission,” Brennan explained, saying he simply wanted to dutifully represent a client before remarking on his lack of headline-generating performances. “I wanted to keep a low profile in the midst of a storm.”

While keeping his head down along with other relatively quiet Trump impeachment attorneys Julieanne Bateman and David Schoen, his work on the impeachment merited a call-back from the Trump family as they defend against an actual legal case in the Big Apple.

In August of this year, Trump Organization CFO Allen Weisselberg pleaded guilty to 15 charges against him – including tax fraud, falsifying records, and conspiracy – in exchange for a 5-month sentence.

His testimony will be used against the ex-president’s corporate entity during the trial which is currently slated to begin on Oct. 24, 2022.

“We will be representing an entity, the Trump Payroll Corp., and the DA has charged an individual [Weisselberg] with filing inaccurate tax returns,” Brennan told the Intelligencer. “We are brought into the mix because the individual was associated with our entity.”

Van der Veen and Brennan have been working for the Trump family businesses since the summer of last year in relation to Manhattan DA Alvin Bragg’s (D) criminal probe – as well as on a defense team handling a related civil investigation by New York Attorney General Letitia James (D). It is unclear whether Castor has also joined that specific effort viz. the James civil suit.

Now, with a real trial looming, the reconstituted legal team have acknowledged their reunion tour might be a somewhat harder show.

“The case is a real uphill battle,” van der Veen told the legal publication. “What you read in that paper says they [in the Trump Organization] don’t have a chance because the CFO entered a guilty plea on all counts. But we really intend to distinguish the individual actors from corporate entities.”

“We’ve been in tough battles before,” Brennan added. “But sometimes the only option is to go into the courtroom, pick the jury and defend the client to the best of your ability. And that’s what we intend to do. We don’t guarantee results, we just guarantee we’ll put up one hell of a fight.”