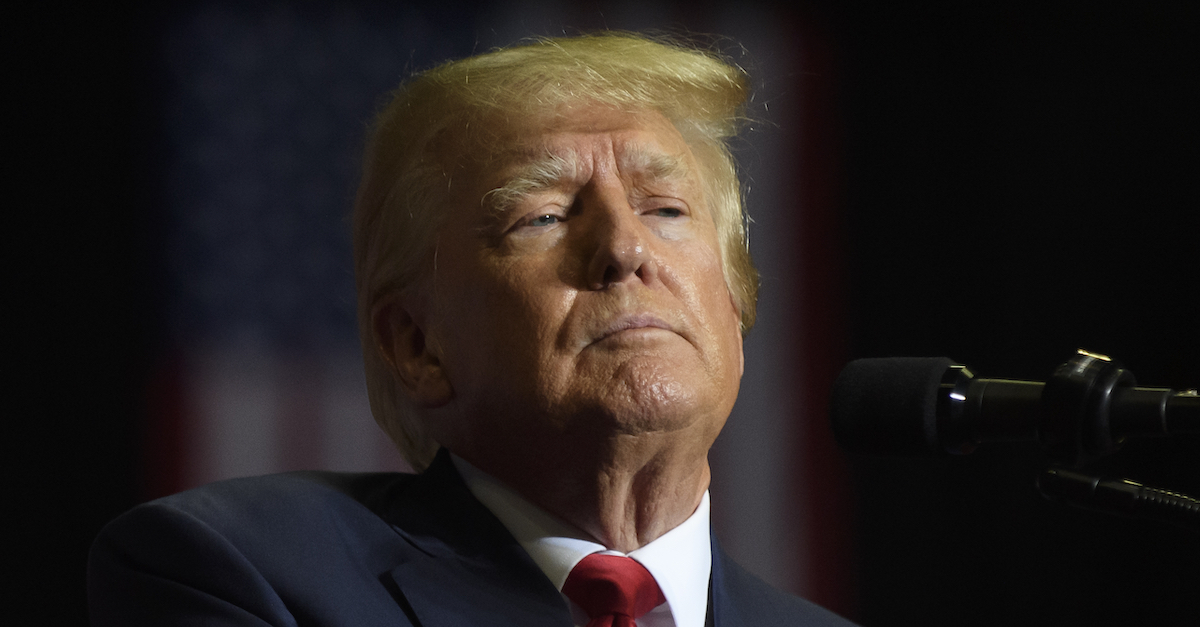 Former President Donald Trump speaks at a rally at the Covelli Centre on Sept. 17, 2022 in Youngstown, Ohio.

As a newly felony-convicted corporation several times over, the Trump Organization faces a possible fine of up to $1.6 million, but experts tell Law&Crime that this should be the least of former President Donald Trump’s worries.

“As a practical matter, the potential $1.6M penalty is near meaningless,” noted former federal prosecutor Mitchell Epner, who is now a partner at the New York City-based law firm Rottenberg Lipman Rich PC. The company pulled in an estimate $450 million in total revenue in 2020.

Far more potentially onerous are two possible collateral consequences of the verdict. One is the threat that the company will be barred from conducting future business with the federal government, which could keep the Secret Service from staying at the former president’s hotels.

Looming even larger for the company, the Trump Organization could also find itself in default on outstanding real estate loans.

“In virtually every real estate loan that I’ve been familiar with, over the last 25 years on commercial real estate in New York, there is a standard clause that says it is an event of default if the borrower is convicted of a felony that has as one of its elements: fraud,” Epner said.

In combination these two collateral consequences could cause “major financial headaches” for Trump. A Manhattan jury returned guilty verdicts on all 17 counts leveled at the Trump Corporation and the Trump Payroll Corp., giving the companies a rap sheet that experts say would fall squarely into these standard real estate contract clause.

“That is something that allows but does not require the lender to accelerate the loan time, which would require Trump to the Trump Organization to either pay it off immediately or refinance it with the lender,” Epner explained.

In the past, Epner said, there were two big reasons that lenders might not have chosen this path: “One was that he was president of the United States, and people were afraid of his wrath, and two was that his loans tended to be at above market rates.”

Being president of the United States was a status that improved Trump’s otherwise poor credit risk, Epner noted.

“Now, because rates have moved up so much, even his old above-market loans are well below market,” he added. “So if the lenders simply call the loans, they can lend out that money to him or to other people at much higher rates.”

The Trump Organization’s felony convictions do not automatically prevent the company from contracting with the federal government, but they could invoke what is known as the “debarment” process for contracts.

After the indictment of the Trump Organization and its ex-chief financial officer Allen Weisselberg, a coalition of anti-corruption watchdogs and a procurement law professor argued that even pending charges were enough to suspend the company from government contracts.

“As you know from experience, it is standard practice to suspend contractors under indictment,” read the letter, which was dated Oct. 12, 2021. “In fact, the government suspends and debars thousands of contractors each year, including small businesses with limited financial means, based on allegations far less serious than the criminal charges facing the Trump Organization.”

The signatories of the letter — Noah Bookbinder, the president of the group Citizens for Responsibility and Ethics in Washington (CREW); Danielle Brian, the executive director of Project on Government Oversight (POGO); and George Washington University Law School Professor Steven L. Schooner — argued that the Trump Organization was “neither a close case for suspension nor a complicated administrative action.”

Such administrative action never occurred, but now that both Weisselberg and the Trump Organization stand convicted of felonies, a POGO representative told Insider that debarment should be a “foregone conclusion.”

In an interview with Law&Crime, Bookbinder went even farther: “I think it would really be pretty outrageous for the federal government not to take steps to debar the Trump Organization,” he said.

He believes that the government may previously have been disinclined to act before a conviction to avoid the perception of politics.

“I think what we’re seeing here is that because this is a company associated with a former president, the government has been excessively cautious,” Bookbinder said. “They haven’t wanted to cut off the Trump Organization, which would assuredly be a huge story and potentially be seen as political without absolutely ironclad reason for doing so. Now, they’ve got absolutely ironclad reason for doing so, which is a series of criminal convictions for fraud offenses.”

As a practical matter, former presidents are entitled to a Secret Service detail, and CREW has been one of the key organizations in criticizing the “exorbitant” fees Trump has charged agents to stay at his properties. They have tried to rein those in through the emoluments clause of the Constitution. Brookbinder predicted that the debarment process could be used to minimize such expenditures, even if Trump tries to obtain case-specific exceptions.

Hotels aren’t the only contracting the Trump Organization has done with the federal government, however.

“For instance, the Secret Service has engaged in contracts for golf carts with the Trump Organization,” Bookbinder said. “That’s probably something it doesn’t have to do, or it could do with somebody else.”

Beyond the tangible consequences of conviction, a New York jury’s speedy conviction of entities with “Trump” in their names could put wind in the sails of the state and federal prosecutors scrutinizing the former president.

“Today’s convictions are likely to embolden the DOJ and the Fulton County DA to continue moving their investigations towards indictments,” Epner predicted. “Acquittal of the Trump Organization would have meant the ‘Teflon’ was intact. Now, it is clear that, at least in New York, the Trump name can be convicted.”

Despite being local prosecutors, the Manhattan District Attorney and his assistants made a point to allege in their indictment that Weisselberg and the companies cheated “federal, New York State, and New York City tax authorities.” But Epner believes that longstanding federal government policy will stop the Internal Revenue Service from taking cues from the convictions.

Known as the Petite Policy, it discourages “unnecessary second trials” and “harassment” from multiple prosecutions, barring a compelling federal interest. Epner believed that the successful conviction of the company by Manhattan prosecutors would rise to that level.