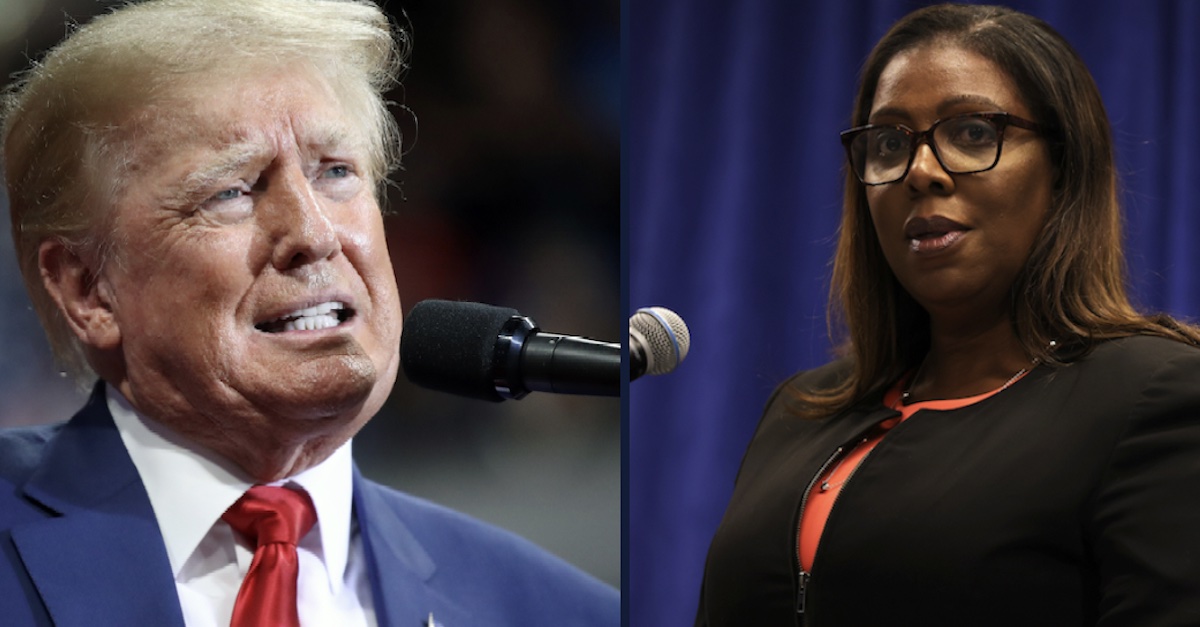 New York Attorney General Letitia James (D) rejected a settlement offer from Donald Trump’s attorneys and is considering filing a lawsuit against the former president for fraud — along with at least one of his adult children, the New York Times reported on Thursday.

Trump’s lawyer and a representative of the attorney general’s office did not respond immediately to Law&Crime’s press inquiries.

Such a lawsuit would mark a culmination of a yearslong investigation that began in early 2019, after Trump’s former attorney Michael Cohen testified before Congress that his former boss inflated or deflated assets to obtain tax benefits. That testimony sparked both civil and criminal investigations against Trump and his self-named business. The Trump Organization, which was charged criminally by former Manhattan District Attorney Cyrus Vance (D), faces trial in October, following the guilty plea of its former chief financial officer Allen Weisselberg.

With the civil and criminal investigations running parallel to each other, Trump and his adult children Ivanka Trump, Eric Trump and Donald Trump Jr. — who are senior executives in his business — faced high-stakes questioning in their depositions. Eric Trump asserted his Fifth Amendment rights against self-incrimination in response to more than 500 questions, and his father reportedly did the same more than 400 times.

Trump and two of his children unsuccessfully fought their subpoenas on the grounds that testifying placed them in a Catch-22: asserting their constitutionally-protected right to silence could protect them in a hypothetical criminal case, but could be used against them in civil court.

In a story attributed to three anonymous sources, the Times reported that James’s office rejected one settlement offer by Trump’s lawyers, and the parties could still reach a deal, though there was no indication that they would. Any negotiation between the sides would be contentious. Trump filed a failed federal lawsuit against the attorney general’s office and has attacked James, who is Black, as a “racist.” James, who is up for reelection in November, made investigating the former president a campaign promise.

Trump’s attorneys have seized upon her campaign trail remarks to attack the investigation as politically motivated, but a Manhattan judge found it would have been a “blatant dereliction of duty” not to probe Trump, given Cohen’s public allegation of fraud.

The Times reported that James could seek to curtail Trump’s real estate portfolio through her lawsuit.

In addition to the attorney general’s civil investigation, Trump remains under criminal investigation in Manhattan, even if that case is widely perceived to have stagnated since the resignations of two of now-District Attorney Alvin Bragg’s (D) top prosecutors. The Justice Department is investigating his possession of thousands of government documents, including more than 100 records marked classified. The Fulton County District Attorney in Georgia is looking into attempts to overturn the 2020 election results for Trump in the Peach State.