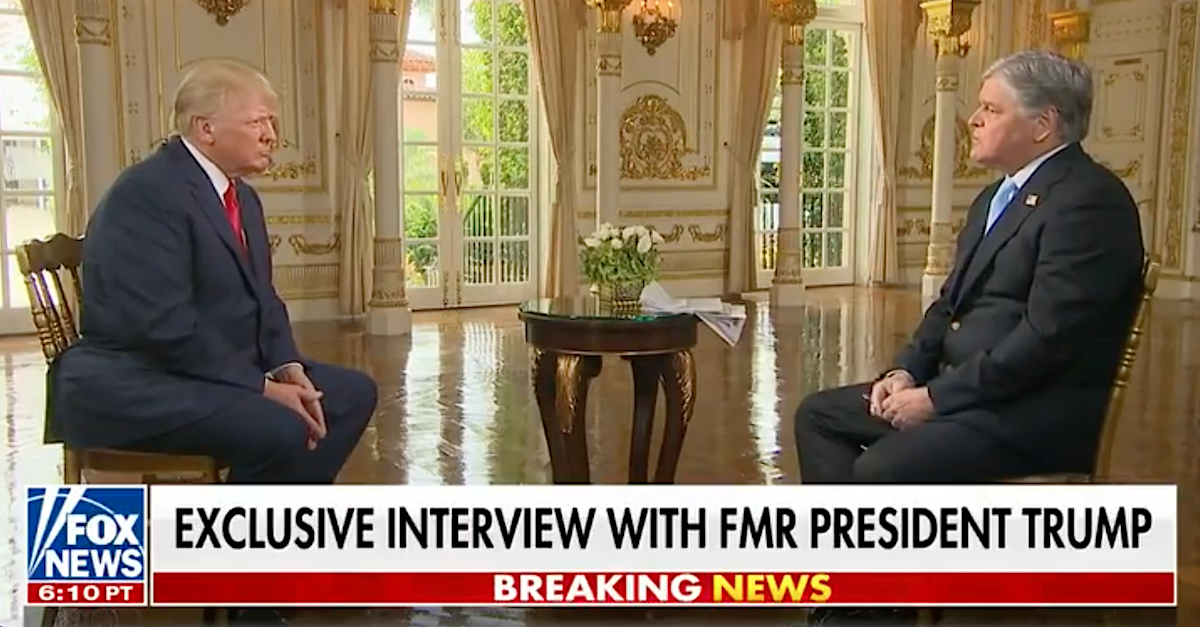 Donald Trump spoke with Sean Hannity on Fox News Channel during a sit-down interview at Mar-a-Lago in Palm Beach, Florida, on Sept. 21, 2022. (Image via screengrab.)

Among the topics Trump and Hannity discussed in the wide-ranging interview was an Aug. 8 raid on the very premises from which the broadcast emanated.

Trump told Hannity that he didn’t personally pack any of the boxes that were shipped from the White House to Mar-a-Lago at the conclusion of his presidency.

“It’s boxes and boxes of pictures, uh, newspaper articles, uh, tremend — even kitchen things,” Trump said of the material.  “You have tremendous amounts of different items. Much clothing. I mean, shirts and everything. Sports gear. So, all of this stuff . . . there were a lot of boxes for a lot of different things.”

The conversation eventually turned to whether or not Trump attempted to declassify the material — something he’s claimed on social media but not officially argued in court.

“Is there a process?” Hannity asked as to Trump’s purported methods of declassification. “What was your process?”

“I did declassify,” Trump cut in.

After a brief back-and-forth involving prompts about the process, Trump issued a response which suggested he could declassify material by merely thinking about doing so:

That muddled explanation was immediately critiqued by attorneys who practice national security law.

“It is true that a President can declassify information by just saying ‘It’s declassified’ — to someone,” McClanahan said. “But remove the listener, and you have an idle fantasy, not a declassification action.”

“Plus, this isn’t really an argument he wants to push too far,” McClanahan continued. “Because if he wins, the next question must be, did President Biden ever think that those records should be classified while Trump still had them?”

In other words, even if Trump told someone the material was declassified, Joe Biden — the current executive — can reverse that decision using the proper processes. 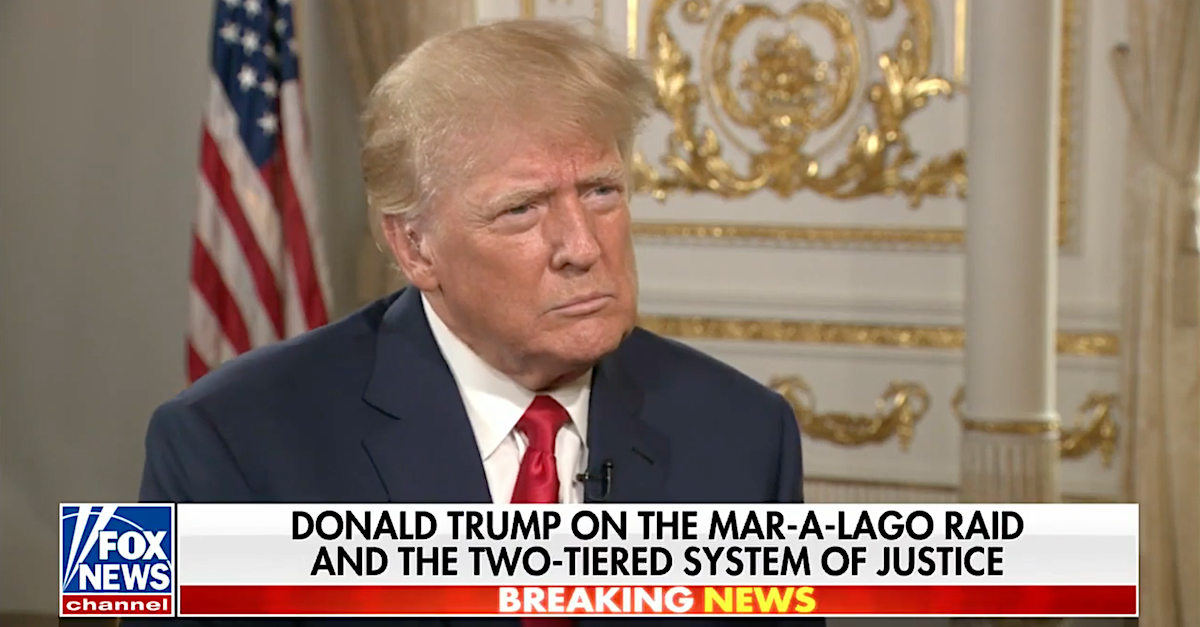 National security attorney Mark S. Zaid, famous for his representation of the Ukraine whistleblower, responded with similar thoughts on Trump’s proffered ability to merely think declassification into existence. Zaid added that Trump’s suggestion that no process was necessary was wildly unordinary, bewilderingly impossible, and highly obtuse:

Theoretically and constitutionally, the argument can be made that for most classified information the President can declassify information or specific documents by affirmatively and vocally saying so. As a practical matter, the process just does not work that way and would be completely outside of all known practical norms and experiences to such an extent that literally no one would know what to do or how to act in the wake of such an argument. This is especially valid with respect to President Trump because he had a well-known habit of saying he wanted certain things he wanted handled that were then ignored by staff or pushed back on and he relented because the request was illegal and/or illogical, practically or politically.

Zaid also offered that Trump could not have singlehandedly declassified certain materials:

I would also note that the President does not have authority to declassify information subject to the Atomic Energy Act as statutorily that power specifically lies with the Secretary of Energy or their designee. That policy, which dates back to the mid-1950s, was upheld by Trump’s Justice Department.

Additionally, Zaid opined that it was “absurd” for Trump to insinuate that moving the material to his Palm Beach home, club, and resort was an affirmative sign that the material was declassified:

As for Trump’s argument that the simple act of moving documents to Mar-a-Lago declassifies them, that’s simply absurd. If we actually examined it at face value and took it seriously, I would assert that could only apply to boxes carried personally by Trump. And I doubt that happened. The movers who carried the boxes and the people who maintained them at Mar-a-Lago certainly had no authority. And as soon as President Trump was citizen Trump, neither did he. This argument is laughable.

Indeed, as noted above, Trump did say during the Hannity interview that he did not personally handle the boxes in question.

Zaid then suggested an analogy in the form of a quip:

Trump is the guy whose actions lead to companies adding to user instructions the warning not to use the microwave to dry your pet.

McClanahan interpreted Trump’s comment about the movement of the documents as “an example of a reason he might declassify them in his mind.”

“But he would still have to declassify them in his mind,” McClanahan said while connecting to the two Trump postulates — again noting that it was simply not possible to wish declassification into existence via some unannounced form of an internal monologue.

Trump’s attorneys asked that an independent party called a special master be appointed to review the seized material to, among other things, help ascertain whether it indeed was classified. At its core, Trump’s litigation strategy has sought to question government assertions that some of the material was classified when it was recovered from Mar-a-Lago. U.S. District Judge Aileen M. Cannon, a Trump appointee, gave some credence to that prompt by Trump’s attorneys; however, on Wednesday evening, a three-judge panel on the 11th Circuit Court of Appeals issued a stay of the special master review process and accordingly allowed the U.S. Department of Justice to review the material seized as part of an ongoing criminal probe. Cannon had halted the criminal review of the material pending the special master’s examination of the seized material.

During his conversation with Hannity on Wednesday evening, Trump claimed the National Archives and Records Administration, the federal agency that began seeking the return of the documents on behalf of the federal government, was being operated by a “radical left group.”  Trump also claimed there was “a lot of speculation” that federal agents raided Mar-a-Lago because they were looking for Hillary Clinton’s deleted emails.  There is no evidence on the public court record to support that suggestion, and Trump did not directly acknowledge that he had copies of Clinton’s emails.

Judge Cannon, for her part, promptly responded to the 11th Circuit order and trimmed her special master order accordingly.

Trump also asserted that the movement of boxes from the White House to Mar-a-Lago was visible and wide open. He suggested that if he wanted to steal documents, he would have done so through the basement and out of the purview of people watching the moving operation from the street.

Trump has repeatedly asserted that his ongoing dispute with the federal government involves the Presidential Records Act; his attorneys have characterized the matter as a “document dispute” and nothing more.

“I don’t think this is prosecutable,” Trump told Hannity when speaking of the matter. “Under the Presidential Records Act, there’s no retribution or prosecution . . . I don’t see how they could prosecute me.”

The U.S. Department of Justice has said in court documents that its probe involves possible violations of the Espionage Act, a criminal statute.

To that end, former federal prosecutor Mitchell Epner, who is now in private practice, reminded Law&Crime on Thursday that the law federal prosecutors are citing has little to do with the material’s classification status

What does matter, Epner indicated, is “whether the person who has the documents knew or should have known that the documents, if made public . . . would have a detrimental effect on the national security of the United States.”

A person can violate the Act even if he holds, keeps, or serves as a conduit for such documents, Epner said.

“One of the things that the government would have to prove is that Trump knew he had the documents, and he knew which documents he had,” Epner continued. “In the absence of Trump saying anything, it would all be inferential.”

Examples of inferences the government could employ to prove knowledge include recitations of the specific places where the documents were found, e.g., an office, a storage closet, or a desk.

“When it comes time to prove that he knew or should have known that what was in these documents, they will now be able to play the interview of him telling Hannity that he purposefully sent them to Mar-a-Lago,” Epner said while again referencing Trump and the documents in question. “And at a minimum, he thought about the documents before deciding in at least in his mind that they were declassified.”

During the interview, Trump said White House staffers and General Services Administration employees did most of the packing. Under the Presidential Records Act, he said that his administration was tasked to “get together” with the “fantastic people” at the GSA to review the material — but that he had the final say over what material he could retain.

“I think that the president predominates in the end,” Trump said. “It’s his choice in the end,” he added, as if to speak about himself in the third person.

Epner indicated that the interview did not help Trump.

During the Hannity interview, Trump also baselessly suggested that the FBI might have planted some of the records during the search. However, he claimed his security cameras probably did not capture any footage of that dubiously alleged act of malfeasance. He earlier said he would not release his security footage of the search because he feared it would clearly identify FBI agents he wished to protect because he assumed they mostly voted for him.