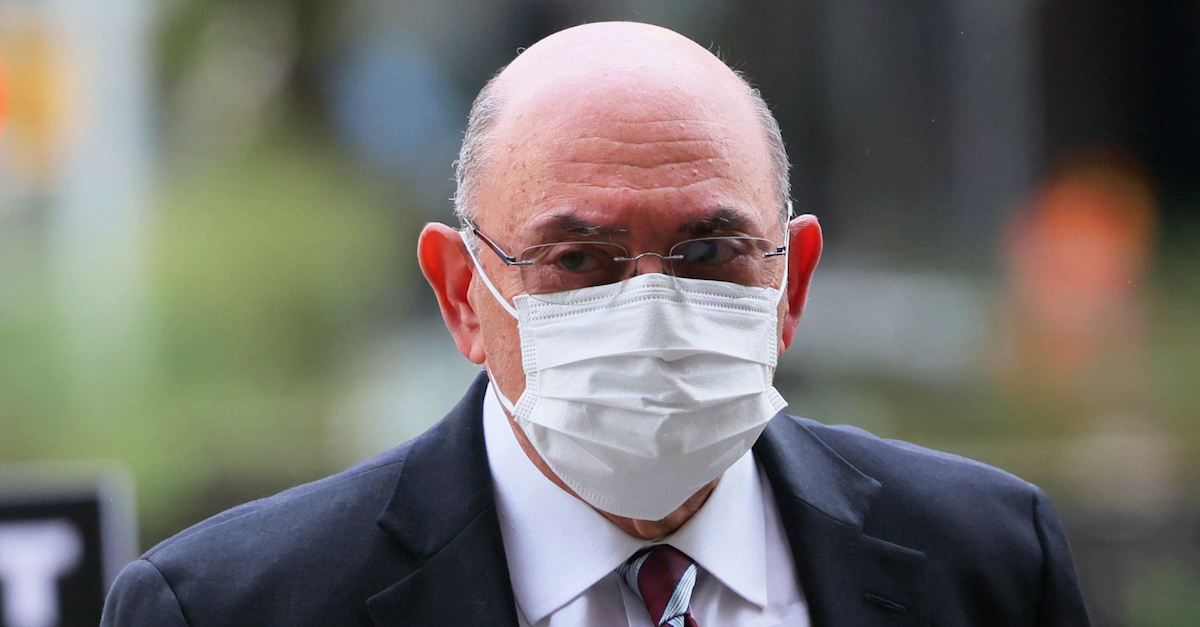 The Manhattan District Attorney’s office charged Weisselberg, 75, with conspiracy, grand larceny, criminal tax fraud, and falsifying business records as part of a 25-page indictment. The indictment also named the Trump Corporation and Trump Payroll Corp. as co-defendants. Both of those entities are listed as the corporate arms of a business popularly known as the Trump Organization.

The guilty plea is attached to a deal.

Weisselberg agreed to testify truthfully against the Trump Organization at trial and “must also make full repayment of taxes, penalties and interest due to the New York City and New York State tax authorities totaling $1,994,321,” the DA’s office said in a press release.

As is standard in New York State guilty pleas, Weisselberg must also waive his rights to an appeal.

The contemplated sentence under the deal is five months behind bars, which Weisselberg must serve in New York City’s Rikers Island jail, the DA said.  The ex-CFO must also serve five years of probation.  Sentencing will not occur until Weisselberg testifies against the Trump Organization at trial.

If Weisselberg reneges on his promise to cooperate, the DA said he will recommend state prison time for the ex-Trump confidant.

“Today Allen Weisselberg admitted in Court that he used his position at the Trump Organization to bilk taxpayers and enrich himself,” said Manhattan District Attorney Alvin Bragg Jr. (D). “Instead of paying his fair share like everyone else, Weisselberg had the Trump Organization provide him with a rent-free apartment, expensive cars, private school tuition for his grandchildren and new furniture – all without paying required taxes.”

“This plea agreement directly implicates the Trump Organization in a wide range of criminal activity and requires Weisselberg to provide invaluable testimony in the upcoming trial against the corporation,” the DA continued.  “Furthermore, thanks to the incredibly hard work and dedication of the team prosecuting this case, Weisselberg will spend time behind bars. We look forward to proving our case in court against the Trump Organization.”

“There is zero tolerance for individuals who defraud our state and cheat our communities,” James said in a statement.  “For years, Mr. Weisselberg broke the law to line his own pockets and fund a lavish lifestyle. Today, that misconduct ends. Let this guilty plea send a loud and clear message: we will crack down on anyone who steals from the public for personal gain because no one is above the law.”

Prosecutors alleged that Weisselberg and the two Trump entities committed tax fraud by paying employees “off the books” in order to pay fewer taxes.

The money in question included $359,058 in tuition expenses for multiple Weisselberg family members, $196,245 for leases on his family’s Mercedes Benz automobiles, $29,400 in unreported cash, and an unspecified amount in ad hoc personal expenses, according to the indictment.

The indictment divulged these particulars:

Weisselberg’s authorized annual compensation at all relevant times was fixed at a number certain. For example, from 2011 through 2018, his compensation was fixed at $940,000, to be comprised of $540,000 in base salary and $400,000 in end-of-year bonus. However, at Weisselberg’s direction, the Trump Organization excluded from his reported gross income the amounts that were paid to him indirectly in the form of rent paid on his New York City apartment, tuition paid on his behalf to his family members’ private school, the automobile expenses paid in connection with his and his wife’s personal cars, and the other items described above. Weisselberg received the benefit of these payments, and the Trump Organization internally tracked and treated many of them as part of his authorized annual compensation, ensuring that he was not paid more than his pre-authorized, fixed amount of gross compensation. However, the corporate defendants falsified other compensation records so that the indirect compensation payments were not reflected in Weisselberg’s reported gross income. Therefore, the W-2 forms and other compensation records reported to federal, state, and local tax authorities fraudulently understated the income that the Trump Organization had paid Weisselberg. Weisselberg included the falsified information set forth on his W-2 forms when he filed his personal income tax returns.

“As a result of the defendants’ underreporting of Weisselberg’s income from 2005 through 2017,” the indictment continued, “Weisselberg concealed approximately $1,760,630 in compensation from tax authorities, unlawfully evaded hundreds of thousands of dollars in federal, state, and local taxes, and requested and received refunds to which he was not entitled, including approximately $94,902 in refunds from the United States Internal Revenue Service and approximately $38,222 in refunds from the New York State Department of Taxation and Finance.”

Downplaying the seriousness of the charges and alleging political motives, the Trump Organization previously characterized the “employee benefits” case as a type of prosecution “neither the IRS nor any other District Attorney would ever think of bringing.”

“This case, at its core, is ordinary,” Bragg assistant Solomon Shinerock wrote in a 117-page memorandum of law in May 2022. “The Indictment is based on criminal tax evasion that took place in New York County and is of the sort this Office regularly prosecutes. It arises from the fact that Allen Weisselberg violated the basic imperative that all New Yorkers faithfully report and pay tax on their income. While such self-reporting typically is verified by an employer’s tax reporting procedures, in this case, Defendants corrupted those procedures.”

A judge on August 12, 2022 refused to dismiss the indictment against Weisselberg.

Jury selection and a subsequent trial are scheduled for Oct. 24 in the remaining cases against the Trump Organization.

The full list of charges to which Weisselberg pleaded guilty is as follows:

— Grand Larceny in the Second Degree, a class C felony, one count

— Scheme to Defraud in the First Degree; a class E felony, one count

— Conspiracy in the Fourth Degree, a class E felony, one count

— Criminal Tax Fraud in the Fourth Degree, a class E felony, one count

— Offering a False Instrument for Filing in the First Degree, a class E felony four counts