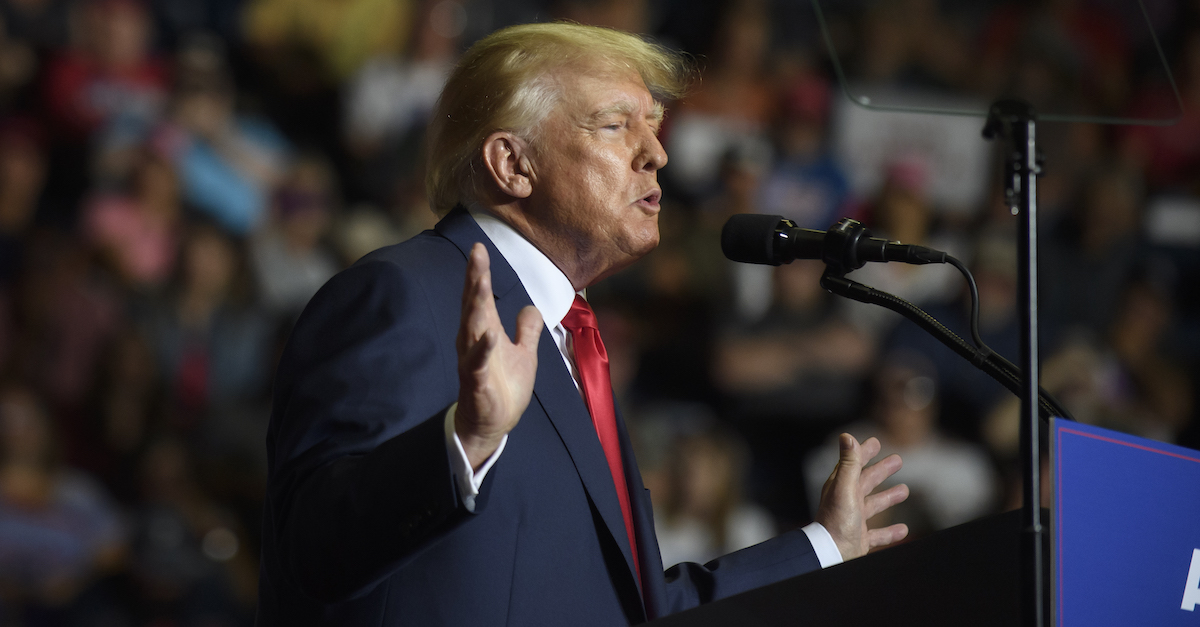 Former President Donald Trump speaks at a rally at the Covelli Centre on September 17, 2022 in Youngstown, Ohio. (Photo by Jeff Swensen/Getty Images.)

The U.S. Department of Justice on Wednesday filed a three-page motion to keep secret the name of an FBI supervisor who signed an affidavit connected to a so-called “Revised Detailed Property Inventory” of materials seized from Donald Trump’s Mar-a-Lago resort.

On Thursday, U.S. District Judge Aileen M. Cannon agreed to the request to file an unredacted copy of the document in question under seal because it bears the full name of the FBI supervisor involved. A blacked-out copy of the document has been in the case file since Monday.

A redacted copy of the affidavit is all that is publicly necessary, the DOJ asserted, because of “threats and harassment” lobbed at government agents employed on the matter.

The Wednesday motion explains as follows — but we’ve omitted the legal citations:

In a hearing on September 20, 2022, the Special Master gave permission for the government to redact the name of the FBI Supervisory Special Agent making the Affidavit. On September 26, 2022, the government filed on the public docket a Notice of Filing that attached the redacted version of the affidavit and indicated it had filed a motion to seal the unredacted version. The proposed sealed document is the unredacted version of the Affidavit. The redaction sought here will protect the identity of an FBI agent working on this investigation. This limited sealing is necessary because a number of the government personnel working on this investigation have, once their identities have been revealed publicly, been subject to threats and harassment.

The legal rationale behind the request is explained accordingly:

The revised inventory and signed affidavit, the DOJ noted, were filed pursuant to a case management plan filed by Special Master Raymond Dearie. Judge Cannon appointed Dearie, a senior status federal judge in the Eastern District of New York, to ascertain the classification status of the documents and to determine whether any were privileged.

Privileged materials, if any, are generally segregated by independent third parties, such as Dearie, from the documents reviewed by agents and prosecutors who may be contemplating a criminal action.

Dearie on Sept. 23 ordered “a government official with sufficient knowledge of the matter” to file “a declaration or affidavit as to whether the Detailed Property Inventory . . . represents the full and accurate extent of the property seized” from Mar-a-Lago. The declaration or affidavit could “exclud[e] documents bearing classification markings,” Dearie noted.

Accordingly, a heretofore unnamed “supervisory special agent” with the FBI filed a Sept. 26 affidavit along with what the agent called “minor revisions” to the original Detailed Property Inventory that hit the docket nearly a month ago on Aug. 30.

A comparison of the documents indicates that the FBI adjusted several of its counts regarding the number of government documents or photographs without classification markings that were seized from several boxes or containers at Mar-a-Lago. The boxes or containers are numbered as items. For instance, item #2 was initially said to contain 69 unclassified documents or photos; the government now says it contained 74, a difference of 5. Some items, such as item #28, contained fewer unclassified documents and images than were originally indicated. The upshot is that the government believes it seized more than 50 additional photos and documents from Trump’s palatial club and estate which did not bear classification markings.

Other counts were also altered, such as those for magazine and newspaper clippings, press articles, and “other printed media.”

The count for the final container — item #33 — also contains a change:  the original inventory said it contained two empty folders which contained “classified” banners, but the revised inventory does not list those items in that container.

The revised inventory does “not include materials filtered and segregated” by a separate Privilege Review Team because those materials remain in the possession of that team,” the affidavit indicates.

The government wants the FBI agent’s name who attested to the new counts to remain shrouded for the aforementioned reasons.

The request to keep the FBI agent’s name sealed is below, as are the original and the revised inventory reports:

Editor’s note: this piece was been updated on Thursday, Sept. 29, 2022, to indicate that Cannon agreed to accept the original document under seal.