‘A Reasonable Attorney Would Never Have Filed This Suit’: Hillary Clinton Seeks Sanctions Against Trump and His Lawyers for ‘Factually and Legally Defective’ RICO Case 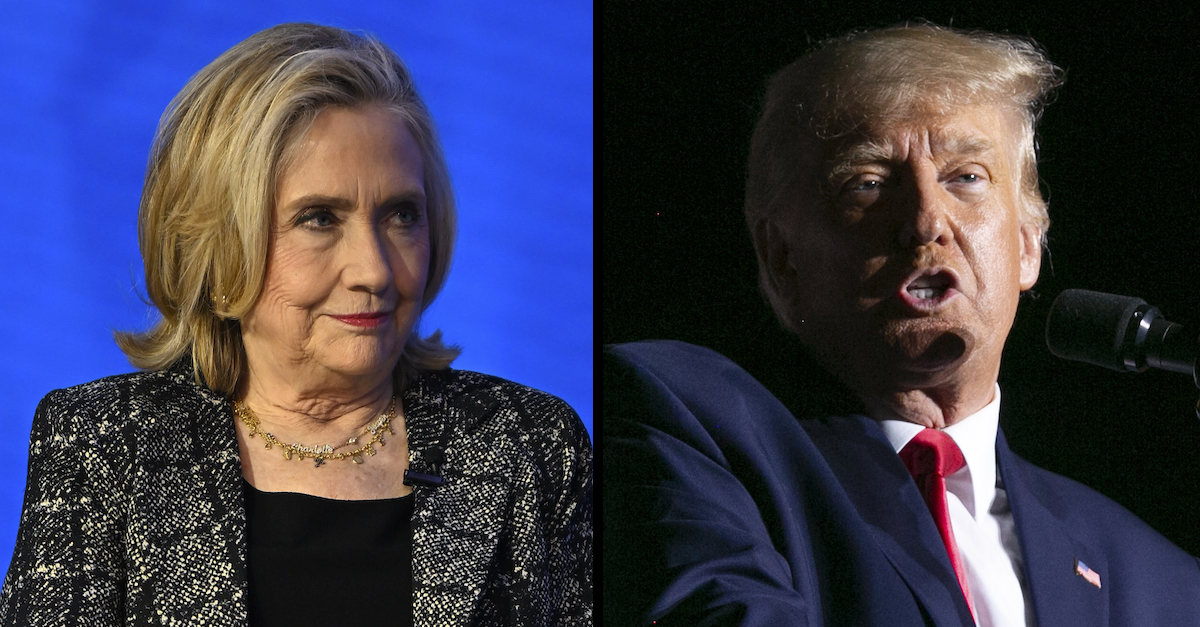 Former secretary of state and Democratic presidential candidate Hillary Clinton filed her motion for sanctions against Donald Trump and his lawyers for filing a “factually and legally defective suit,” calling the former president’s failed RICO case a “political stunt.”

The 32-page motion was also filed in the U.S. District Court for the Southern District of Florida on behalf of John Podesta, Robby Mook, the DNC, Debbie Wasserman Schultz, Charles Halliday Dolan, Jr. (who previously filed his own motion for sanctions), Fusion GPS, Glenn Simpson, Nellie Ohr, Bruce Ohr, Igor Danchenko, and Rodney Joffe. Though Trump alleged each figured in some way into an alleged racketeering plot against his 2016 campaign and presidency, the case went nowhere.

Despite the allegations of a grand conspiracy, U.S. District Judge Donald M. Middlebrooks dismissed the case “in its entirety” after the various defendants sought that very outcome. Middlebrooks concluded that a federal statute of limitations had passed on claims related to the 2016 election and found the Trump case had little to no merit.

Middlebrooks also retained jurisdiction in the event that the defendants sought sanctions. That time has come, and defendants are seeking north of $1 million dollars in legal fees and costs.

The sanctions filing began by urging Middlebrooks not to waste an opportunity to make Trump and his lawyers pay fees and costs, and be subject to “other relief the Court finds just” for filing a lawsuit that was “unwarranted on the facts, unsupported by the law, and imposed substantial burdens both on Defendants and this Court.”

“Despite being alerted to the many deficiencies in the initial Complaint by one round of motions to dismiss, Plaintiff and his counsel pressed forward on an Amended Complaint that fixed none of the problems, and instead simply added more invective and irrelevant factual allegations to what was already a ‘shotgun’ pleading,” began the filing headlined by Clinton’s lawyers David Oscar Markus and David Kendall. “The Court should not countenance the abuse of its resources—or allow significant burdens to be imposed on Defendants, many of them individuals who have devoted their careers to public service—in service of Plaintiff’s political stunt.”

“Under these circumstances, sanctions against both Plaintiff and his counsel are appropriate. Under 28 U.S.C. § 1927, this Court may order Plaintiff’s counsel to reimburse Defendants for the fees and costs associated with their motions to dismiss the Amended Complaint and the instant motion for sanctions,” the filing went on. “Under the Court’s inherent authority as well as the Defend Trade Secrets Act, the Court may impose sanctions on Plaintiff himself and require Plaintiff to reimburse Defendants for all the fees and costs incurred as a result of his suit, including those associated with responding to the initial Complaint and Amended Complaint, and with the instant motion for sanctions.”

The end of that the line immediately above included a footnote that called Trump and his lawyers’ conduct “objectively unreasonable.”

The sanctions motion only gets more scathing from here, calling the conduct of Trump’s lawyers “vexatious” and “egregious” to that point that “it is ‘tantamount to bad faith.'” The motion also said the lawsuit was the opposite of a case that a “reasonable attorney” would file:

Plaintiff’s counsel engaged in unreasonable and vexatious conduct first by filing, and then by amending, a factually and legally defective suit. An award of costs and fees under Section 1927 is appropriate when an attorney’s conduct is so egregious that it is ‘tantamount to bad faith.’ Amlong, 500 F.3d at 1241–42. ‘[F]or purposes of § 1927, bad faith turns not on the attorney’s subjective intent, but on the attorney’s objective conduct.’ Norelus v. Denny’s, Inc., 628 F.3d 1270, 1284 (11th Cir. 2010). “[O]bjectively reckless conduct is enough to warrant sanctions even if the attorney does not act knowingly and malevolently.” Id. (quoting Amlong, 500 F.3d at 1241). Under this standard, the Court “compare[s] the conduct at issue with how a reasonable attorney would have acted under the circumstances.” Id.

A reasonable attorney would never have filed this suit, let alone continued to prosecute it after multiple Defendants’ motions to dismiss highlighted its fundamental and incurable defects. As this Court recognized in dismissing the Amended Complaint, “[a]t its core, the problem with Plaintiff’s Amended Complaint is that Plaintiff is not attempting to seek redress for any legal harm; instead, he is seeking to flaunt a two-hundred-page political manifesto outlining his grievances against those that have opposed him, and this Court is not the appropriate forum.” Op. at 64. “It is not simply that” the Amended Complaint “is ‘inadequate in any respect’; it is inadequate in nearly every respect.” Id. at 63 (emphasis in original).

“We vehemently deny the inflammatory allegations contained in the sanctions motion filed by the Clinton team. This motion, conveniently filed one week prior to election day, is nothing more than a thinly-veiled attempt to score political points,” Habba said in a statement to Law&Crime on the motion. “This motion is particularly inappropriate, given that the our client’s case will soon be reviewed by the Eleventh Circuit. We will oppose this motion and trust that the Court will see through this ruse.”