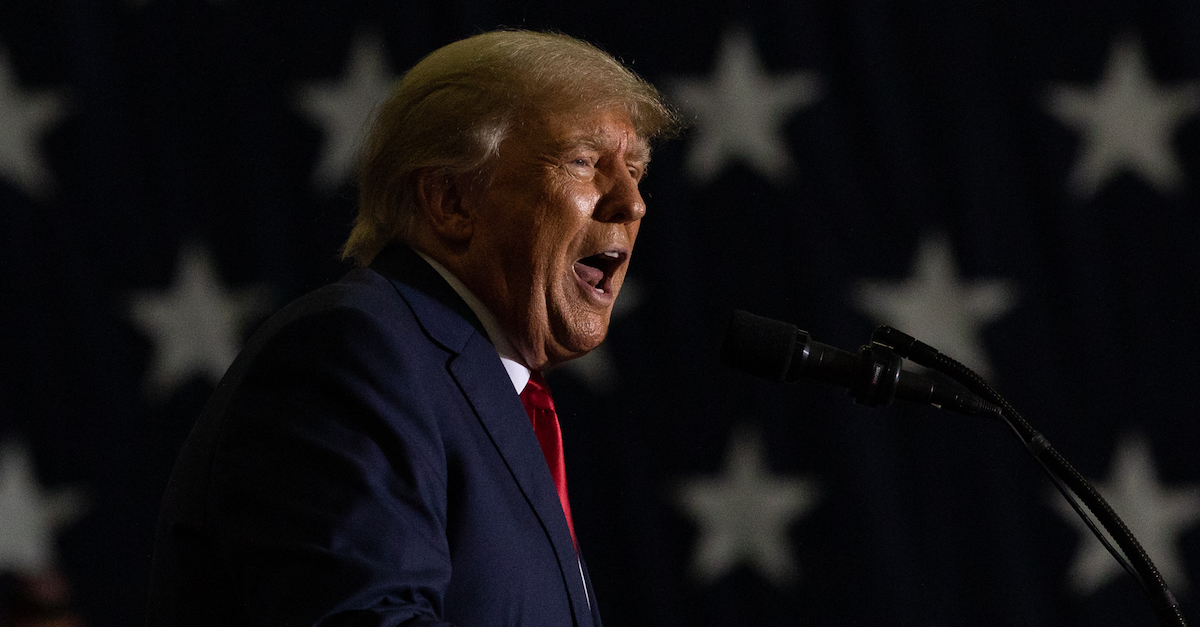 The 11th Circuit Court of Appeals on Wednesday agreed to fast-track a U.S. Department of Justice appeal of a case involving allegedly classified and secret documents recovered from Donald Trump’s Mar-a-Lago home and resort. However, the resulting order to expedite the case still doesn’t allow the government to move as fast as it desired.

The Aug. 8 search at Mar-a-Lago, effectuated via what the DOJ told the appellate court was a search warrant “lawfully issued” by a U.S. magistrate judge, enraged Trump; his lawyers immediately moved a district court judge in Florida to shut down the DOJ’s review of the material as part of a criminal probe under the Espionage Act. Trump’s lawyers also asked for the appointment of a special master to review the material to ascertain whether executive privilege or attorney-client privilege claims might block the government from reviewing it.

U.S. District Judge Aileen M. Cannon agreed to Trump’s request, appointed U.S. District Judge Raymond J. Dearie as special master, and banned the DOJ from reviewing the seized documents as part of that criminal probe. Cannon did, however, allow the government to review the “materials seized for purposes of intelligence classification and national security assessments.”

The DOJ appealed Cannon’s order to the 11th Circuit; it argued that Cannon did not currently have proper jurisdiction over the matter and that Trump had no “plausible assertion of privilege as to those records bearing classification markings.” The DOJ also argued that Cannon’s injunction against its review of the material “caused irreparable harm because it constrained the government’s ability to assess and mitigate the national security risks arising from the improper storage of classified records and because the injunction hindered the government’s ability to conduct its criminal investigation.”

The 11th Circuit on Sept. 21 stayed — or set aside — part of Cannon’s injunction pending additional arguments. On Sept. 26, the appellate court set a briefing schedule for those arguments: the government’s brief was due Oct. 19, Trump’s response brief was due 30 days later on Nov. 18, and a government reply was due 21 days after that on Dec. 9.

“However,” the DOJ wrote on Sept. 30 while seeking to speed up that process, “if Plaintiffs were to request and receive any extensions of time, briefing could stretch well into 2023.”

The DOJ noted that Cannon issued a sua sponte order — that is, on her own volition — that pushed back Dearie’s initial deadlines for his review of the Mar-a-Lago material.

The DOJ asserted that the deadlines could easily be slid forward because the issue was legal, not factual; that it was not terribly complex; and that it was “already briefed . . . throughly” at the district court level.

“Given that the appeal will concern the same issues and, for the most part, the same case law and statutory authorities, there is little reason to give the parties nearly three or more months to brief their well-established positions,” the DOJ told the 11th Circuit on Sept. 30.

The DOJ said an expedited schedule would serve the dual interest of judicial economy and justice. As to the latter, the DOJ went on at some length:

Based on the district court’s orders thus far, the government is barred from accessing all of the materials except those with classification markings recovered in August pursuant to a lawful search warrant — and it may continue to be barred from doing so until mid-December or later. To be sure, the government sought a partial stay of the district court’s September 5 order only as it pertained to records bearing classification markings because those aspects of the order caused the most serious and immediate harm to the government and the public. And the motions panel agreed that the injunction against the government’s review and use of those records for criminal investigative purposes “risks imposing real and significant harm on the United States and the Public.” (Citation omitted.) Even if not to the same degree, such harms persist with respect to the district court’s injunction against the government’s review and use of thousands of remaining documents and other materials that were recovered pursuant to a court-authorized search and may constitute evidence of crimes. The government is thus unable to examine records that were commingled with materials bearing classification markings, including records that may shed light on, for example, how the materials bearing classification markings were transferred to Plaintiff’s residence, how they were stored, and who may have accessed them. The records not marked as classified may also constitute evidence of potential violations of 18 U.S.C. § 1519 (obstruction) and 18 U.S.C. § 2071 (concealment or removal of government records). In short, an expedited schedule for briefing and argument may enable the government, if it is successful in this appeal, to more quickly resume its full investigation without restraints on its review and use of evidence seized pursuant to a lawful search warrant.

The government also asked the 11th Circuit to expedite oral argument on the issue.

“President Trump disagrees with and objects to the Government’s distorted and argumentative presentation of facts concerning the unprecedented raid of his home, its conduct in these proceedings, and the procedural history of this case,” the opposition motion asserted.

“President Trump will be prejudiced if this appeal is expedited,” the Trump motion continued. “This kind of disparity is not contemplated by principles of due process or fairness.”

The argument went on by referencing the volume of material at issue — a common Trump argument in various other motions on file at the district court level:

Moreover, as the Court may be aware, the parties are engaged fully in performing the tasks required under the expedited Special Master schedule. This requires counsel for President Trump to conduct a review of approximately 11,000 documents (comprised of an estimated 200,000 pages of information), categorize those documents and litigate any disputes before the Special Master and the District Court during the same time period counsel is tasked with preparing an opposition brief under the Government’s proposed expedited schedule. Certainly, the Government is free to file its brief at its earliest convenience. However, no good cause has been shown as to why President Trump should have significantly less time than the Government and less time than that provided under the Rules to prepare and brief his arguments before this Court in this unprecedented case.

“The Government, on the other hand, cannot possibly be prejudiced if this appeal is not expedited and President Trump is afforded the few extra days provided under the Rules to file his brief,” Trump’s attorneys said.

They then asserted that the former president should be afforded nothing less than special treatment due to his title:

Finally, the extraordinary circumstances herein presented — an investigation of the 45th President by the administration of his political rival — would countenance against any rush to judgment. Indeed, the public interest is served best by transparent and thorough consideration of all the issues. The Government has not and cannot possibly articulate any real risk of loss or harm resulting from a more deliberative process.

On Wednesday, the 11th Circuit agreed with the DOJ to expedite the process. U.S. Circuit Judge Adalberto Jordan, a Barack Obama appointee, signed the relevant order.

“The Court directs the Clerk to expedite the appeal for merits disposition purposes,” Judge Jordan wrote.

The order notes that Judge Jordan “consulted with the Chief Judge” to have the case “assigned to a special merits panel from the classified appeals log randomly selected by the Clerk.”

“That panel will decide when and how to hear oral argument,” the order notes.

The briefing schedule promulgated by the appeals court is a hybrid or compromise between the plans suggested by the DOJ and by Trump’s attorneys.

The government motion to expedite, Trump’s opposition to that motion, and the court’s order are all available in a combined document here.