The Justices Have Been Supremely Chatty in Wake of Dobbs Decision 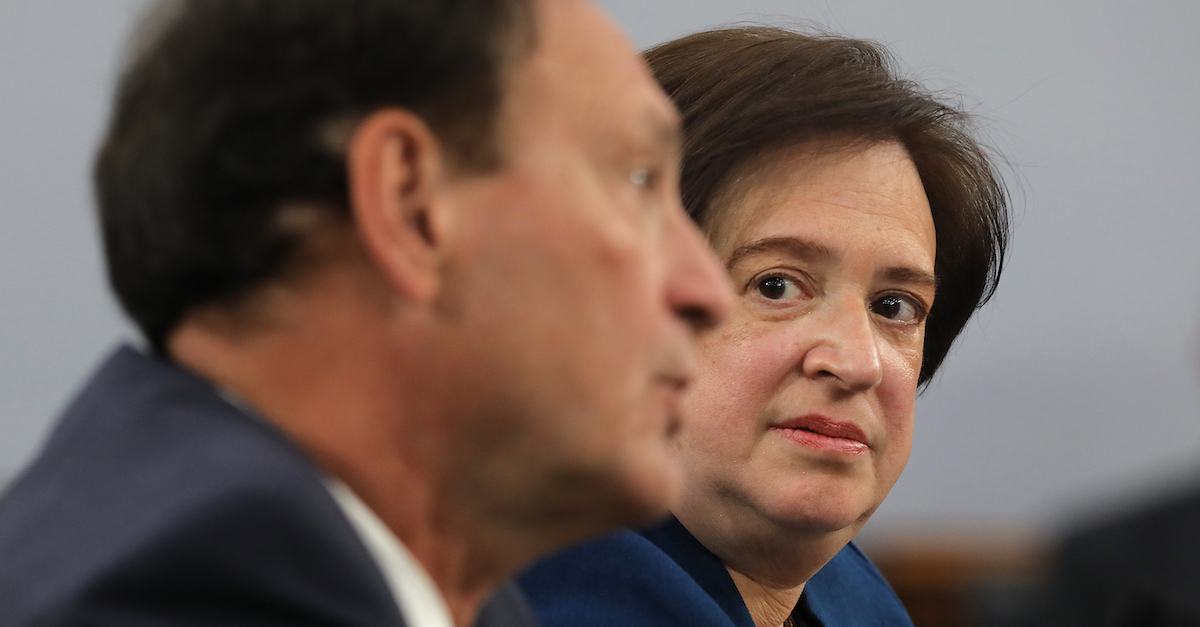 The U.S. Supreme Court justices will return to the bench for their October term after what many have recognized was a rather unusual summer. Though the justices partook in their usual off-season speaking engagements, of late they seem to have been conducting arguments of their own — with one another — using the press as their proxies.

In a Wall Street Journal piece Thursday, correspondent Jess Brevin documented some of the conflicting comments Chief Justice John Roberts and Associate Justice Elena Kagan have made in public on the subject of the legitimacy of the Supreme Court itself.

During a recent event at Salve Regina University in Rhode Island, Kagan said that “the very worst moments” in SCOTUS history have been “when judges have even essentially reflected one party’s or one ideology’s set of views in their legal decisions.” Kagan said that in order to secure public confidence in the court, it must “[act] like a court and not [act] like an extension of the political process.”

Kagan similarly addressed an audience in July at a judicial conference in Montana and warned, “If, over time, the court loses all connection with the public and with public sentiment, that is a dangerous thing for democracy.”

In early September, Chief Justice Roberts spoke at a conference and scolded, “Simply because people disagree with an opinion is not a basis for questioning the legitimacy of the court.”

Justice Neil Gorsuch looked on as Roberts made the remarks. In his own words, Gorsuch spoke of another contentious issue related to Dobbs: the historic leak in May 2022 of a the draft opinion in the case.

Gorsuch said “[i]mproper efforts to influence judicial decision making, from whatever side, are a threat,” echoing remarks Justice Clarence Thomas made months earlier.

“They inhibit our capacity to communicate with one another,” Justice Gorsuch added, with hope that the leak probe will reveal what happened “sooner or later.”

The swipes taken by the justices came in the weeks and months immediately following the high court’s watershed ruling in Dobbs v. Jackson Women’s Health Organization in late July.

A matter of days after the official Dobbs decision was handed down, Justice Alito joked with a crowd in Rome that he “had the honor” of writing “the only Supreme Court decision in the history of that institution that has been lambasted by a whole string of foreign leaders who felt perfectly fine commenting on American law.” At the event, Alito lamented the dangers of an increasingly secular society that does not sufficiently protect religious freedom.

“It goes without saying that everyone is free to express disagreement with our decisions and to criticize our reasoning as they see fit. But saying or implying that the court is becoming an illegitimate institution or questioning our integrity crosses an important line,” Alito commented to the Wall Street Journal this week.

Alito also delivered the keynote address at Catholic University of America’s law school Wednesday, in which he remarked, “Judges affect people — indirectly, but sometimes very powerfully, through their decisions.” Alito also said, “It’s important to keep in mind that these decisions are not just abstract discussions. They have a real impact in the world and you have to keep that in mind.”

“You start writing too rigidly and you will see, the world will come around and bite you in the back,” Breyer warned the current members of the court.

In the interview, Wallace asked Breyer whether it ever feels like “separate camps” among the justices.

Breyer responded, “Sometimes, but less than you think.”

Breyer elaborated and said that during the first 27 years of his time on the bench, there were an overwhelming number of cases decided unanimously with only about 10-15% of the cases coming down to 5-4 decisions.

Wallace followed up, asking whether things ever got “strained personally” among majority and dissenting justices. Breyer responded by recalling times with former Chief Justice William Rehnquist, when justices would have “pleasant conversations over lunch” just minutes after deciding a contentious case.

“As people, we get on,” summed up Breyer.

Whether the justices will continue to “get on” in the way Breyer described remains to be seen — and certainly opined upon by the general public. SCOTUS issued a press release Wednesday announcing that all scheduled oral arguments for the upcoming term will be held in the courtroom and will be audio-livestreamed via the Supreme Court’s website.