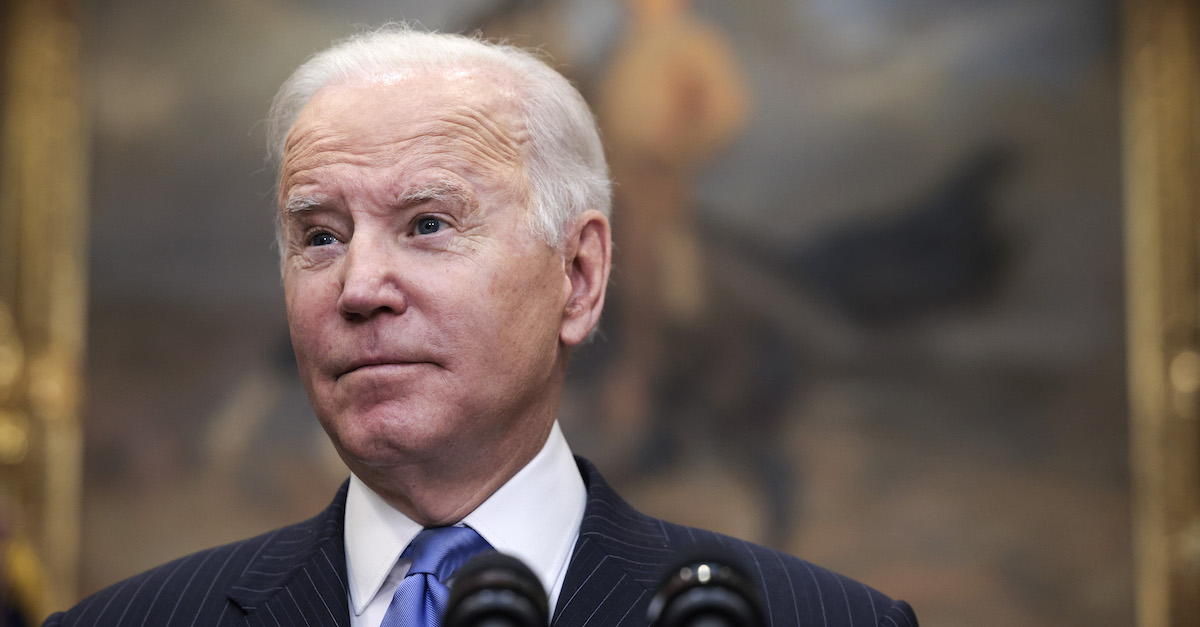 President Joe Biden delivers remarks on the Omicron COVID-19 variant following a meeting with his COVID-19 response team at the White House on November 29, 2021. (Photo by Anna Moneymaker/Getty Images.)

The Supreme Court wasted no time in scheduling oral arguments over the fate of President Joe Biden’s vaccine mandates for employers.  The high court announced a special session mere days after the new year begins to vet the administration’s vaccine policies.

“At a critical moment for the nation’s health, the OSHA vaccination or testing rule ensures that employers are protecting their employees and the CMS health care vaccination requirement ensures that providers are protecting their patients,” Psaki wrote in a statement, referring to the Department of Labor’s Occupational Safety and Health Administration (OSHA). “We are confident in the legal authority for both policies and DOJ will vigorously defend both at the Supreme Court.”

In September, the Biden administration announced multiple measures designed to curb the spread of the coronavirus pandemic by encouraging vaccinations among U.S. workers. The most ambitious of these operated through OSHA, which issued new rules mandating that any business with 100 or more employees require their workforce to get vaccinated or submit to weekly COVID-19 testing.

Legal experts at the time broadly agreed that such measures were an exercise of government power found to be constitutional more than a century ago in the watershed case of Jacobson v. Massachusetts.

The rules nevertheless have come under extensive attacks and divided federal courts of appeal. On Friday, the Sixth Circuit reinstated the OSHA rules after their highly conservative sister court — the New Orleans-based Fifth Circuit — prevented the rules from taking effect earlier this month.

The appeal of the decision reinstating the OSHA rules went to Supreme Court Justice Brett Kavanaugh, who is assigned the Sixth Circuit. The Donald Trump appointee scheduled arguments for Jan. 7, 2022 and deferred consideration of a request to block the mandate in the interim.

The other challenge set to be heard by the Supreme Court is from Louisiana, whose case was previously successful on the district court level and before the Fifth Circuit.

COVID-19 has claimed the lives of more than 800,000 Americans, and medical authorities overwhelmingly agree that vaccination safely and effectively reduces (but does not entirely eliminate) the spread of the virus and, especially with a booster shot, keeps infection less deadly.

Vaccine mandates have been a constitutionally permissible tool in the government’s arsenal since the Jacobson ruling in 1905, and the Sixth Circuit saw no reason that precedent would not hold.

The 2-1 majority also found the federal agency did its duty to protect workers.

“To protect workers, OSHA can and must be able to respond to dangers as they evolve,” Circuit Judge Jane Branstetter Stranch, an appointee of Barack Obama, wrote in the Dec. 17 opinion. “OSHA addressed COVID-19 in progressive steps tailored to the stage of the pandemic, including consideration of the growing and changing virus, the nature of the industries and workplaces involved, and the availability of effective tools to address the virus. This reasoned policy determination does not undermine the state of emergency that this unprecedented pandemic currently presents.”

The OSHA rule’s challengers — and the Fifth Circuit — asserted that Jacobson stood for the power of a state, rather than the federal government, a proposition the Sixth Circuit flatly rejected.

Months after the announcement of the OSHA rules, the White House declared their suggest in a fact sheet touting that they cover two-thirds of U.S. workers.