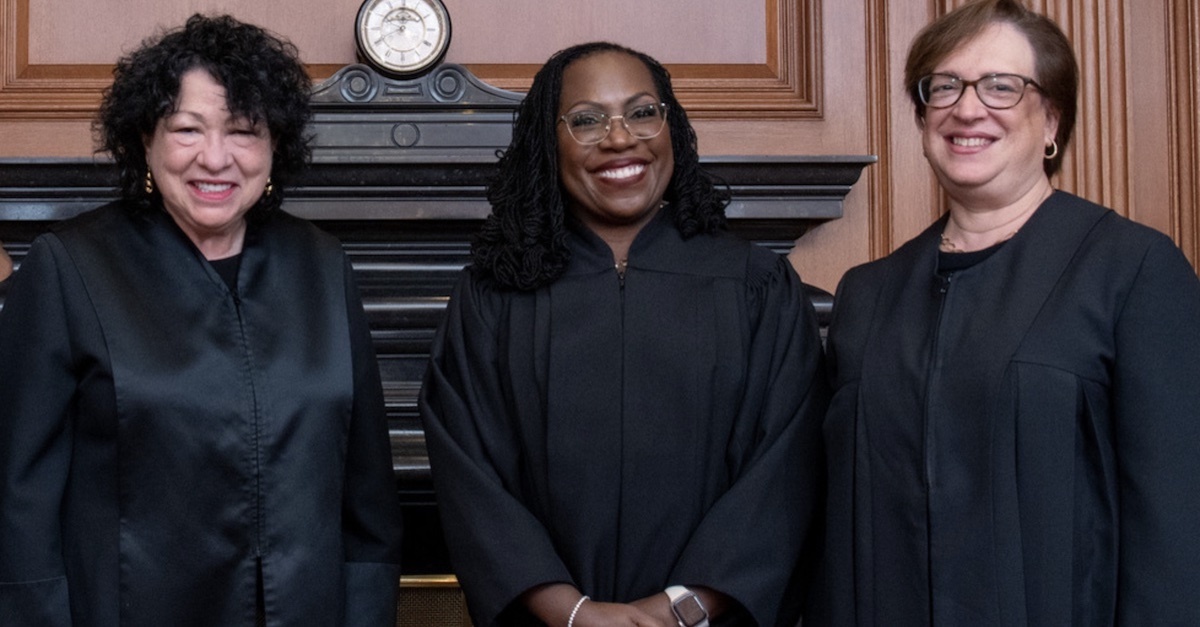 Merrill v. Milligan, the voting rights challenge to Alabama’s 2021 redistricting map, was back before the justices Tuesday, and the Supreme Court’s liberal wing made its hostility to Alabama’s arguments clear. For over two hours, the justices animatedly traded questions and comments with counsel over the role of race in congressional districting plans.

Bench is on fire. https://t.co/xYSZplTV8P

The high court’s ruling has potential to gut the Voting Rights Act of 1965 (VRA) as it has been on track to do with other cases.

A three-judge panel of the Alabama federal district court (which included two judges appointed by President Donald Trump) ruled unanimously to temporarily block the 2021 redistricting map in January 2022 by issuing a preliminary injunction. In its ruling, the court cited Alabama’s long history of racial discrimination in the context of voting and said that the redistricting map likely violated Section 2 of the VRA.

Shortly thereafter, however, a split SCOTUS ruled 5-4 to stay that injunction, allowing the redistricting map to go into effect. In fiery dissents and concurrences, justices not only swiped at each other, but also presented their takes on the Court’s so-called “shadow-docket.”

Alabama argued in its brief that doing what the lower court ordered — drawing a district that would create a majority-Black district — would constitute unconstitutional racial discrimination in itself. The Yellowhammer State argued that Section 2 of the VRA should be used as “a shield against racial discrimination,” as opposed to “a sword to perpetuate it.”

The Biden administration has argued that the role of race in elections should be “limited but essential,” and that the VRA requires a state to factor in race in cases when the political split in a state “would otherwise deny minority voters equal electoral opportunities.”

Voting in Alabama is, indeed, racially split and highly polarized. As the plaintiffs point out, no Black candidate has ever been elected to Congress in Alabama from a majority-white district.

The Supreme Court’s liberal wing aggressively attacked the arguments of Alabama Solicitor General Edmund Lacour Tuesday morning. Justice Elena Kagan began by calling the case “a slam dunk” under existing precedent. Kagan reminded Lacour that three judges below found that the case is “an easy case” and “not one of the boundary line cases.”

Moreover, Kagan pointedly asked Lacour, “Do you agree that the benchmark you propose has never been recognized by this court as the benchmark that is appropriate in these cases?”

Kagan also made her broader point clear: the outcome of the case has potential to cripple the VRA.

Justice Kagan runs through the Supreme Court’s recent assaults on the Voting Rights Act then asks the Alabama solicitor general: If you succeed in blowing up the VRA’s ban on dilution of minority votes, what’s left of the law? pic.twitter.com/jrc0FXPiwP

Justice Ketanji Brown Jackson, the newest of the nine to the job, followed up on Kagan’s questions with a number of inquiries of her own, pressing Lacour on Alabama’s argument that its redistricting must be entirely “race-neutral.”

“Race has already infused the voting system,” Jackson said, “So can you help me understand why you think that the world of race-blind redistricting is really the starting point in this situation?”

When Lacour answered that the state’s interest was in avoiding harm, Jackson snapped, “I don’t think so.” She continued, and explained that “people are being segregated in effect,” even if that segregation was not the state’s intention.

To observers, Justice Samuel Alito attempted to come to Lacour’s rescue, phrasing what the justice called the state’s “least far-reaching argument.” Alito raised the possibility that controlling precedent merely demands districting maps to be “reasonably configured” by an “unbiased mapmaker.” Kagan was clear in her response, telling Lacour, “there’s no indication in Gingles or any cases that the Court did mean ‘reasonably configured’ in the way Justice Alito suggests.”

Election law expert Rick Hasen commented that Alito was “doing all the work for Alabama” by providing a framework that would “make plaintiffs lose more voting rights cases.”

Alito is doing the work for Alabama. Coming up with a theory that looks like it complies with existing law, but allows Alabama to win with a tweaked standard that will make plaintiffs lose more voting rights cases.

When Justice Sonia Sotomayor joined the fray in time to pose biting questions to Lacour about the facts on the ground in Alabama. The justice pointed out that while the “Black Belt” is habitually spread across several districts, Mobile and Baldwin (which are predominantly white) are always kept together.

Lacour provided an answer that was quickly mocked by the Nation’s Elie Mystal: that because the “Black Belt” stretches from Texas to Virginia, it cannot be kept together.

The Alabama guy’s reason for splitting up the “black belt” but not any of the white communities?? It’s too long. He says that because the black belt goes east/west it’s too long. That’s… where we are.

It was the newest justice on the bench, however, who used her time to deliver a lengthy statement that went to the heart of Alabama’s argument. Jackson eschewed the idea that either the Constitution or the VRA requires districting to be race-blind. Rather, Jackson explained, race is central to the history of the 13th, 14th, and 15th Amendments as well as the VRA.

Jackson explained that after looking at the reports of the Commission on Reconstruction, the framers’ intent was clear:

We looked at the history and traditions of the Constitution, and at what the framers and the founders thought about. And when I drilled down to that level of analysis, it became clear to me the framers adopted the Equal Protection Clause in a race-conscious way.

They were in fact trying to ensure that people who had bene discriminated against — the Freedmen during the Reconstruction period —  were actually brought equal to everyone else in society. So I looked at the Report on Reconstruction, which drafted the 14th Amendment. And that report says that the entire point of the Amendment was to secure rights to freed former slaves. The legislator who introduced that Amendment said that “unless the Constitution should restrain them, those states will all, I fear, keep up this discrimination and crush to death the hated Freedmen. That’s not a race neutral or race blind idea in terms of the remedy.

Later, during colloquy with attorney Abha Khanna who represented the respondents, Sotomayor made a similar point. Sotomayor said Alito “gave the game away” when he suggested ignoring race as a factor. Such a take on the VRA, said the justice, “turns Section 2 on its head.”

“There’s no such thing as racial neutrality in Section 2,” Sotomayor continued, “It’s explicitly saying that a protected group must be given equal participation. And so indifference to racial inequality is exactly what Section 2 is prohibiting or barring.”

Solicitor General Elizabeth Prelogar argued on behalf of the Biden administration Department of Justice. Prelogar called the litigation an “extreme and atypical” case of “vote dilution,” and warned the justices that allowing Alabama to implement its plan would cause “drastic real-world consequences.”

“Nothing would stop Alabama and many other states from dismantling their existing majority-minority districts and leaving Black voters in entire swaths of the country no ability to elect their preferred representatives, ” Prelogar warned.

Tuesday was just the second day of oral arguments for Jackson. Court-watchers were quick to pronounce Jackson a fitting successor to recently retired Justice Stephen Breyer.

Breyer was fun, but the punchiness & directness of Justice Jackson’s questions, alongside Justice Kagan’s usual oral-argument mastery, is quite the one-two punch.