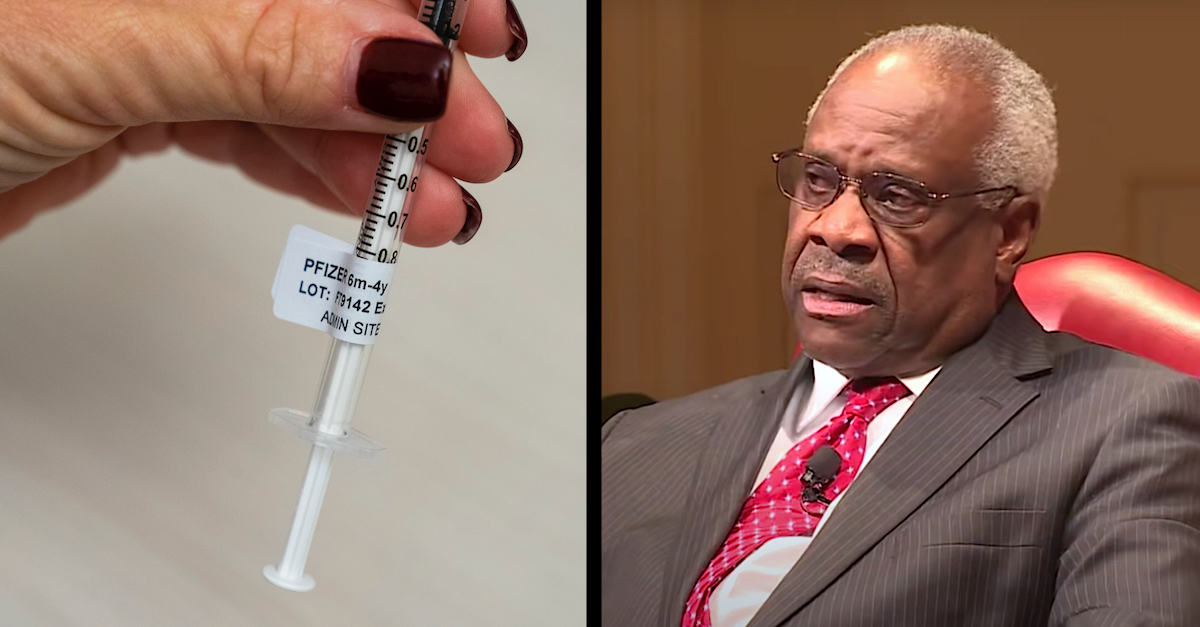 Justice Clarence Thomas echoed the religious concerns of a group of New York healthcare providers while dissenting from the U.S. Supreme Court’s refusal to hear a case about Covid-19 vaccine mandates.

The litigants, led nominally by one “Dr. A,” filed suit after then-Gov. Andrew Cuomo (D) required all healthcare providers in the Empire State to receive Covid-19 vaccines unless doing so would be “detrimental to [their] health.” Those who could not receive vaccines because of health concerns were required to “employ standard protective measures and could keep their jobs.”

The petitioners sued because “the State denied a similar exemption to those with religious objections,” according to Justice Thomas. According to Thomas’s recitation of the state’s regulatory regime, healthcare providers with religious objections “would be fired, even if they took the same protective measures” similar to those whose health issues abrogated the government’s vaccination regimen.

Thomas perceived that as unequal treatment.

“Petitioners are 16 healthcare workers who served New York communities throughout the COVID–19 pandemic,” Thomas wrote. “They object on religious grounds to all available COVID-19 vaccines because they were developed using cell lines derived from aborted children.”

Thomas said the petitioners were, in his view, “[o]rdered to choose between their jobs and their faith” and have since “been fired, forced to resign, lost admitting privileges, or been coerced into a vaccination.”

Thomas and two other justices — Samuel Alito and Neil Gorsuch — voted to take the case; the rest of the Court did not. Generally, four justices must vote to accept a case before the Court will hear it.

Gorsuch and Alito joined Thomas’s dissent, which lamented the lack of clarity in the law on the issue at hand (we’ve omitted the legal citations):

We have held that a “law . . . lacks general applicability if it prohibits religious conduct while permitting secular conduct that undermines the government’s asserted interests in a similar way.” Yet there remains considerable confusion over whether a mandate, like New York’s, that does not exempt religious conduct can ever be neutral and generally applicable if it exempts secular conduct that similarly frustrates the specific interest that the mandate serves. Three Courts of Appeals and one State Supreme Court agree that such requirements are not neutral or generally applicable and therefore trigger strict scrutiny. Meanwhile, the Second Circuit has joined three other Courts of Appeals refusing to apply strict scrutiny. This split is widespread, entrenched, and worth addressing.

The Supreme Court refused to hear the matter after a district court issued an injunction against the state’s vaccine mandate and an appellate court overturned that injunction.

The New York mandate includes a medical exemption but no religious exemption, even though “allowing a healthcare worker to remain unvaccinated undermines the State’s asserted public health goals equally whether that worker happens to remain unvaccinated for religious reasons or medical ones,” Thomas wrote, quoting a previous Gorsuch dissent in a previous iteration of the case by “Dr. A.”  Back when Gorsuch wrote his dissent, the case was before the Supreme Court on an application for emergency injunctive relief.

Thomas said he “would not miss the chance to answer this recurring question in the normal course on our merits docket” as opposed to the court’s so-called “shadow docket,” a term Justice Alito abhors and which Thomas noted that Justice Elena Kagan also loathes.

The issue, per Thomas, was the “host of emergency measures to address the COVID–19 pandemic” that were “not neutral toward religious exercise” and which the court could only address “in an emergency posture, a practice that Members of this Court have criticized.”

“Here, the Court could grant a petition that squarely presents the disputed question and consider it after full briefing, argument, and deliberation,” Thomas wrote. “Unfortunately, the Court declines to take this prudent course. Because I would address this issue now in the ordinary course, before the next crisis forces us again to decide complex legal issues in an emergency posture, I respectfully dissent.”

As Law&Crime noted while discussing the case in its earlier emergency posture, COVID-19 vaccines themselves do not contain aborted fetal cells, according to a fact sheet promulgated by North Dakota health officials. Some abortion opponents have objected to the fact that some coronavirus vaccines have used cells originally isolated from fetal tissue in various stages of vaccine development and manufacturing, according to a fact sheet on the issue by the Los Angeles County Department of Public Health.

“Historical fetal cell lines were derived in the 1960’s and 1970’s from two elective abortions and have been used to create vaccines for diseases such as hepatitis A, rubella, and rabies,” the fact sheet says. Such vaccines have been the subject of mandates without the same legal controversy attached, Law&Crime reported recently.

Pope Francis has called getting vaccinated an “act of love.”

Pfizer and Moderna used fetal cell lines early in their Covid vaccine development to test the efficacy of their formulas, as other vaccines have in the past. The fetal tissue used in these processes came from elective abortions that happened decades ago. But the cells have since replicated many times, so none of the original tissue is involved in the making of modern vaccines.

So it is not true that Covid vaccines are manufactured using fetal cell lines, nor do they contain any aborted cells.

Read the Thomas dissent below:

[Photo of vaccine syringe via David Ryder/Getty Images; photo of Clarence Thomas via a YouTube/Library of Congress video screengrab.]