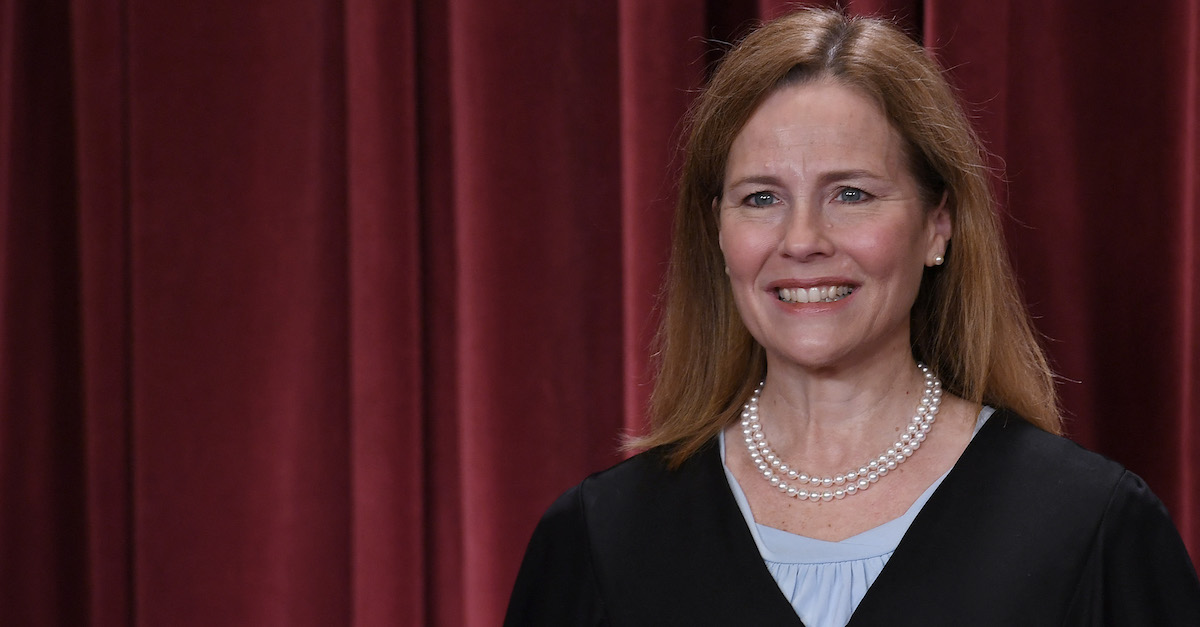 Associate US Supreme Court Justice Amy Coney Barrett poses for the official photo at the Supreme Court in Washington, DC on October 7, 2022.

On Tuesday, Nov. 1, the Supreme Court docket shows, the Pacific Legal Foundation filed for an emergency application for a writ of injunction pending appeal. The group, a self-described “nonprofit legal organization that defends Americans’ liberties when threatened by government overreach and abuse,” asserted that Justice Barrett should block Biden’s agenda as the case by applicants Frank Garrison and Noel Johnson “proceeds to the merits” in the Seventh Circuit, the justice’s former haunts.

“The [debt] cancellation will trigger increased state-tax liability for members of the class, and Applicants therefore respectfully request that this Court enter an emergency order pursuant to the All Writs Act, 28 U.S.C. § 1651, to prevent this imminent cancellation and resulting tax liability,” the application said.

“Student debt cancellation is among the most contentious and hotly-debated proposals in the nation today,” the application continued. “And although Congress has erected certain pathways for loan forgiveness, such as the Public Service Loan Forgiveness (PSLF) program, some call for the government to cancel loan principals more broadly. Nevertheless, Congress has declined to do so.”

Biden’s program forgives up to $20,000 in federal student loans for qualified borrowers. Legally, the administration accomplished this via the Higher Education Relief Opportunities for Students Act of 2003 (the “HEROES Act”), which allows the federal government to adjust the terms of student loan programs during national emergencies. The administration reasoned that the COVID-19 pandemic is an emergency that underlies the change.

The Pacific Legal Foundation application argued that the Eduction Department and its Secretary Miguel Cardona “exceeded its authority under the HEROES Act but has also violated constitutional limits.”

“They thus have no legitimate interest in avoiding an injunction. Huge numbers of borrowers face the immediate possibility of unwanted, and unlawful, tax liability through automatic cancellation, while every American will foot the half-trillion-dollar bill for ED’s improper actions,” said the application (some citations removed for ease of reading). “The public interest lies with adherence to the ‘democratic processes’ and not ED’s actions.”

“Even if none of this were so, the public interest would not be harmed by an injunction,” applicants attempted to reassure the justice. “Loan repayments and interest accrual are still paused, so no borrower will be disadvantaged by an injunction that allows the Seventh Circuit to consider Applicants’ claims on the merits in an orderly fashion.”

But Barrett, the justice who handles such requests for the Seventh Circuit, did not bite. She flatly declined to grant an injunction pending appeal — and didn’t explain her reasoning in doing so.

The move mirrored how the associate justice handled a similar request on Oct. 20, when Barrett almost immediately jettisoned the request for an injunction by another conservative group seeking to derail the White House’s student debt relief plan while litigation rages in the lower courts.