In Wake of Masterpiece Cakeshop, Supreme Court Declines to Hear Case of Florist Who Refused Service for Same-Sex Wedding 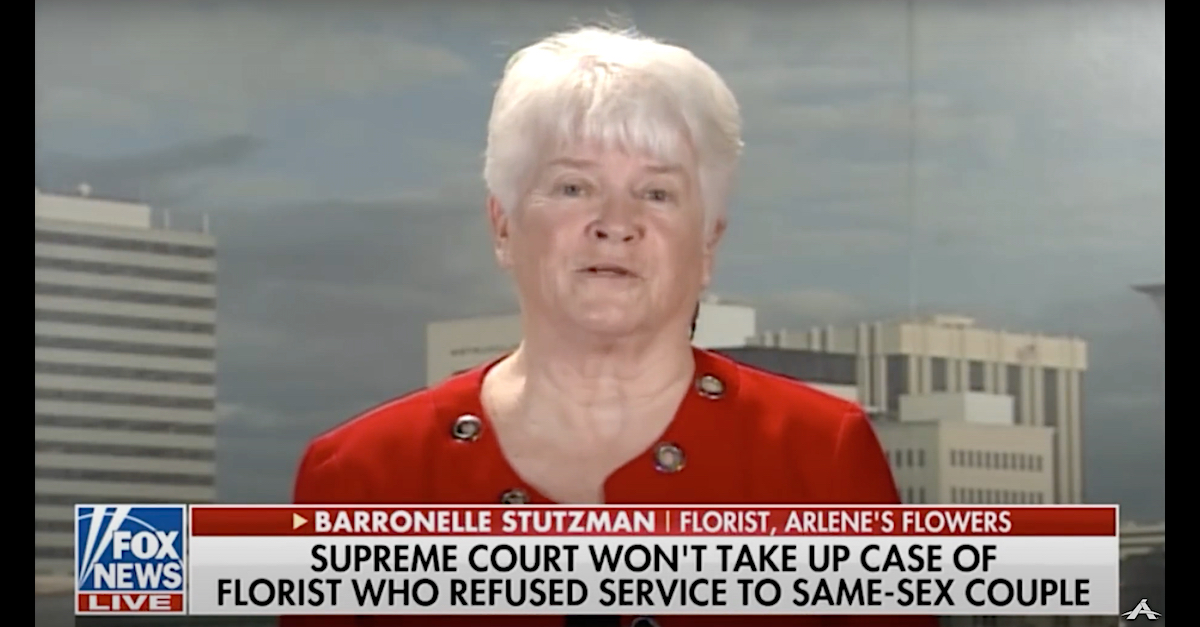 The next Masterpiece Cakeshop-style battle will not feature flowers.

In a series of orders on the last day of its term, the Supreme Court on Friday declined to hear the case of a Washington State florist who also refused service to a same-sex couple for their wedding. The ruling hands a victory to LGBT couples and eliminates what would have been a highly anticipated round of high court arguments in the fall. Only Justices Clarence Thomas, Samuel Alito and Neil Gorsuch would have agreed to hear the case of Arlene’s Florist v. Washington State; the Supreme Court otherwise rejected the shop’s appeal without explanation.

The case began in 2013, when florist Barronelle Stutzman refused to provide flowers for the wedding of Robert Ingersoll and Curt Freed, citing her religious beliefs. An eight-year legal journey followed, with two trips to the Supreme Court.

“Today the Supreme Court confirmed that LGBTQ people should receive equal service when they walk into a store,” Mar wrote in a statement. “Planning a wedding was a joyful time for Rob and Curt until they were refused service at their local flower shop. No one should walk into a store and have to wonder whether they will be turned away because of who they are. Preventing that kind of humiliation and hurt is exactly why we have nondiscrimination laws. Yet 60 percent of states still don’t have express protections for LGBTQ people like the kind in Washington State. Our work isn’t over yet.”

Ingersoll and Freed’s battles have been long. In 2017, the Washington Supreme Court ruled that the florist’s denial constituted discrimination, with one state court justice writing “this case is no more about the access to flowers than civil rights cases were about access to sandwiches.”

The next year, Stutzman appeared on Fox News alongside her attorney to discuss the case’s origins.

“When Rob came in to talk to me about his wedding—and I’ve waited on Rob for ten years, and it has been a joy—but when he came in and talked about his wedding I just told him I could not do it, because my faith in Jesus Christ,” Stutzman told the network. “And he said he understood, and we talked about his wedding, and mom walking him down the aisle. He asked if I would recommend another florist, which I recommended three. And we hugged each other, and Rob left.”

Ingersoll, of course, remembers it differently.

“After Curt and I were turned away from our local flower shop, we cancelled the plans for our dream wedding because we were afraid it would happen again,” Ingersoll reflected in a statement. “We had a small ceremony at home instead.”

The U.S. Supreme Court first considered the case shortly after its high-profile decision in Masterpiece Cakeshop, another case about the ability of private businesses to refuse service to LGBT customers for religious reasons.

When issuing the Masterpiece Cakeshop opinion in 2018, the Supreme Court’s majority largely sidestepped broader issues of anti-discrimination laws, free exercise of religion, and freedom of speech. In a 7-2 ruling, the majority found that the Colorado Civil Rights Commission did not examine the case with neutrality to the shop. Later that same year, the Supreme Court reversed the Washington State Supreme Court’s ruling in Arlene’s Flowers and returned the case to the lower courts “for further consideration in light of Masterpiece Cakeshop[.]”

Ingersoll expressed his desire for others to find inspiration in the ruling.

“We hope this decision sends a message to other LGBTQ people that no one should have to experience the hurt that we did,” he said in a statement.

Alliance Defending Freedom, which backed the florist’s case, did not immediately have a statement on its website on the adverse ruling.