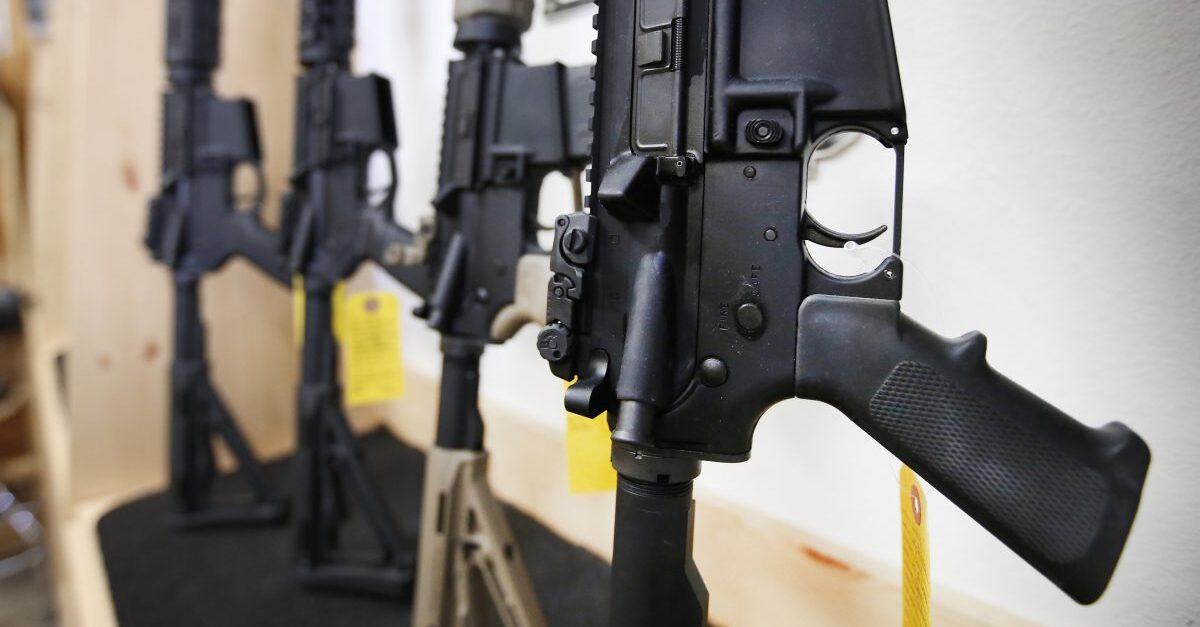 A U.S. District Court judge on Friday issued a 94-page opinion which overturned California’s long-standing ban on certain guns deemed by state law to be “assault weapons.”  The case, Miller v. Bonta, is sure to be appealed.  Below are a dozen key groups of passages straight from the pen — or keyboard — of Judge Roger T. Benitez, a George W. Bush appointee to the federal bench in the Southern District of California.  The headlines and a few lines of brief context are added for clarity and to paraphrase some of the judge’s logic.

The judge’s well-publicized opening paragraph compared the AR-15 rifle to a pocket gadget.

Like the Swiss Army Knife, the popular AR-15 rifle is a perfect combination of home defense weapon and homeland defense equipment. Good for both home and battle, the AR-15 is the kind of versatile gun that lies at the intersection of the kinds of firearms protected under District of Columbia v. Heller, 554 U.S. 570 (2008) and United States v. Miller, 307 U.S. 174 (1939). Yet, the State of California makes it a crime to have an AR- 15 type rifle. Therefore, this Court declares the California statutes to be unconstitutional.

That factual distinction is important given the case Judge Benitez cited a few lines further along:

The evidence shows that one reason for the popularity of the modern rifle is that it makes a good weapon for self-defense at home. The AR-15, in particular, is an easy firearm to shoot accurately and is generally easier to fire accurately than a handgun. The AR-15 rifle is light in weight, and has good ergonomics, and is suitable for people of all statures and varying levels of strength.

The judge took issue with the State of California’s nomenclature:

Moreover, there is little evidence that modern rifles are used disproportionately in crime.

The judge repeatedly sought to dismiss notions that “assault weapons” — with specific attention paid to the AR-15 rifle — are inherently dangerous:

One is to be forgiven if one is persuaded by news media and others that the nation is awash with murderous AR-15 assault rifles. The facts, however, do not support this hyperbole, and facts matter. Federal Bureau of Investigation murder statistics do not track assault rifles, but they do show that killing by knife attack is far more common than murder by any kind of rifle. In California, murder by knife occurs seven times more often than murder by rifle. For example, according to F.B.I. statistics for 2019, California saw 252 people murdered with a knife, while 34 people were killed with some type of rifle – not necessarily an AR-15. A Californian is three times more likely to be murdered by an attacker’s bare hands, fists, or feet, than by his rifle. In 2018, the statistics were even more lopsided as California saw only 24 murders by some type of rifle. The same pattern can be observed across the nation.

In 1989, most judicial thinking about the Second Amendment was incorrect. Prior to 2008, lower court opinions did not acknowledge that the Second Amendment conferred an individual right to own firearms, or that the right applied against the states. See e.g., United States v. Hancock, 231 F.3d 557, 565–66 (9th Cir. 2000) (“[T]his court has concluded that ‘the Second Amendment is a right held by the states, and does not protect the possession of a weapon by a private citizen.’”) (citation omitted). When the features-based definition was added for the year 2000, a citizen challenging AWCA in the Ninth Circuit was still (incorrectly) regarded as lacking basic Article III standing. Judicial recognition of an individual right to keep and bear arms to be respected by the states would come later with the Heller decision in 2008 and the McDonald decision in 2010. See McDonald v. City of Chicago, Ill., 561 U.S. 742, 767 (2010) (“[I]n Heller, we held that individual self-defense is ‘the central component’ of the Second Amendment right.”).

The judge vehemently disagreed with various methodologies proffered by the State of California and its experts, some of which relied, he said, on news reports:

News reports are normally considered inadmissible hearsay, but both sides offered into evidence news articles and magazine pieces and expert testimony relying on newspaper articles about gun-related events. News reports to which the parties made no objection are admitted into evidence. But it begs the question, “Where are the actual police reports or criminal court records?” Why are the only collections of offensive or defensive gun use maintained by biased organizations? How reliably can a news reporter after the fact, identify a firearm as an “assault weapon,” or determine the size of an ammunition magazine, or count the number of rounds fired? One would expect a police report to accurately record these kinds of raw facts.

The judge also somewhat chided a state expert, Lucy Allen, who relied on news reports — which he described as “unreliable collections of shooting stories” — to tie “assault weapons” to mass shootings:

No one can blame Allen too much for her changing tallies of “mass shootings.” The problem is a disagreement over the definition of a “mass shooting” combined with the lack of a reliable database maintained by a disinterested organization or governmental entity. Instead, these unreliable collections of shooting stories are generally not based on police reports, but rather claim details from after-the-fact, sometimes sensationalized, news reporting, lacking access to crime scenes and based on random bystander perceptions.

(8) The A.G. who defended California’s law should have put murderers on the stand.

While the Plaintiffs may have difficulty obtaining copies of actual police reports, surely the Attorney General has easy access. But the Attorney General has not offered a single California police report. There were 161 mass shootings in the last 40 years but there is no testimony from any percipient witness. There were instances of defensive gun use but no testimony from any defensive gun user.

The Attorney General’s lack of direct evidence is noted. There is no direct testimony from criminal shooters.

(10) Mass shootings are “rare events,” while a “lopsided” number of “violent victimizations” could be prevented by increased assault weapon ownership.

The judge appears to support the “good guy with a gun” theory lock, stock, and barrel:

Furthermore, perspective is important. Contrary to public misinformation, mass shooting events are rare events. In contrast, as stated previously, there were 3.7 million burglaries per year in the years 2003 to 2007, 266,560 people suffered a violent victimization, 23,310 persons, or 9% of those victims, suffered serious injury, and approximately 7,700, or 3% of those victims, were raped. During the same years, there was less than one mass shooting with an assault weapon per year. According to Allen’s list, the total number of persons, killed or injured, during all mass shooting events with an assault weapon during the years of 2003 to 2007 was 38.

Today, an assault weapon ban that trenches on the rights of 266,560 citizens to protect themselves from violent assault in their homes by criminalizing acquisition and possession of a common firearm that they might deem best for their defense, balanced against possibly reducing the shooting risk to 38 people, is lopsided.

(11) Americans need “assault weapons” in case they join the militia.

The Attorney General does not address or acknowledge whether the ban also imposes a burden on the Second Amendment right to own a firearm that is the ideal weapon for use in the militia. If the modern rifle is the ideal weapon, which it is according to the testimony of General [Dean Allen] Youngman, then the ban forces a choice of a less-than-ideal weapon for militia use. That may not be a severe burden today when the need for the militia is improbable. One could say the same thing about the improbable need for insurance policies. The point is, neither the Attorney General nor current court decisions address the level of scrutiny to employ where a regulation burdens the Second Amendment right to keep and bear arms for militia service. This Court assumes that for intermediate scrutiny, the “fit” of a total ban is judged on its application to all aspects of exercising the Second Amendment right: home defense, militia use, sporting competitions, hunting, target practice, and other lawful uses.

The judge then goes on to extoll the virtues of an “informal assembly of able-bodied, ordinary citizens” for the purposes of a “citizens’ militia” — a “safeguard against tyranny,” he noted, quoting Heller.  He also made it clear that he believe citizens’ militias are “not irrelevant” fictions of the distant colonial past:

Before the Court there is convincing and unrebutted testimony that the versatile AR-15 type of modern rifle is the perfect firearm for a citizen to bring for militia service. A law that bans the AR-15 type rifle from militia readiness is not a reasonable fit for protecting the Second Amendment right to keep and bear arms for the militia. It has been argued that citizens with nothing more than modern rifles will have no chance against an army with tanks and missiles. But someone forgot to tell Fidel Castro who with an initial force of 20 to 80 men armed with M-1 carbines, walked into power in Havana in spite of Cuba’s militarized forces armed with tanks, planes and a navy. Someone forgot to tell Ho Chi Minh who said, “Those who have rifles will use their rifles. Those who have swords will use their swords. Those who have no swords will use their spades, hoes, and sticks,” and eventually defeated both the French and the United States military. Someone forgot to tell the Taliban and Iraqi insurgents. Citizen militias are not irrelevant.

Here’s how the judge wrapped things up:

You might not know it, but this case is about what should be a muscular constitutional right and whether a state can force a gun policy choice that impinges on that right with a 30-year-old failed experiment. It should be an easy question and answer. Government is not free to impose its own new policy choices on American citizens where Constitutional rights are concerned. As Heller explains, the Second Amendment takes certain policy choices and removes them beyond the realm of permissible state action. California may certainly conceive of a policy that a modern rifle is dangerous in the hands of a criminal, and that therefore it is good public policy to keep modern rifles out of the hands of every citizen. The Second Amendment stands as a shield from government imposition of that policy.

There is only one policy enshrined in the Bill of Rights. Guns and ammunition in the hands of criminals, tyrants and terrorists are dangerous; guns in the hands of law- abiding responsible citizens are better.