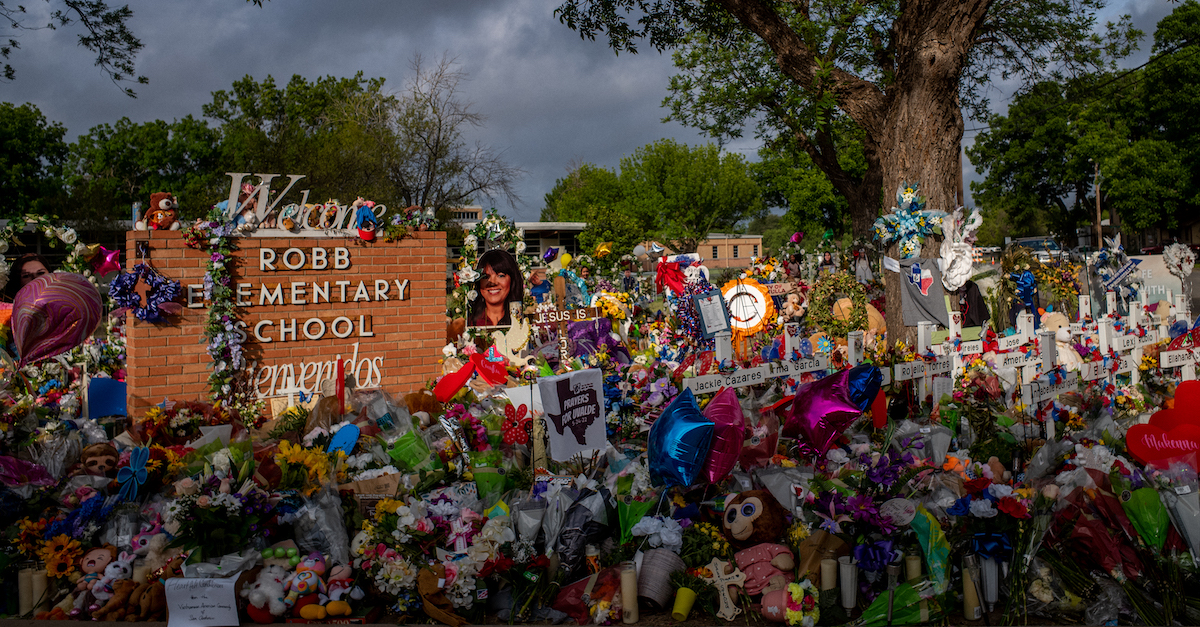 A memorial dedicated to the 19 children and two adults killed on May 24th during the mass shooting at Robb Elementary School is seen on June 1, 2022 in Uvalde, Texas.

Survivors of the mass shooting at Robb Elementary School in Uvalde, Texas, are suing local school and law enforcement entities for $27 billion, alleging that the officials’ repeated systemic failures have resulted in lifelong injury and trauma.

In a class-action complaint filed Tuesday, dozens of students, parents, and school staff members blamed officials for multiple miscommunications, errors, and inaction during the May 24, 2022 shooting that left 19 young schoolchildren and two teachers dead. On that day, gunman Salvador Ramos killed 19 children and two teachers at the elementary school; although hundreds of Uvalde police officers had responded to the scene, they waited more than an hour before entering the fourth-grade classroom where Ramos carried out the attack, eventually killing him.

The police response has been widely criticized as a failure. Legal experts have said that the officers had no legal obligation to act any other way and that qualified immunity may protect the police from liability.

Class Action Complaint: Prolonged Massacre Was Due to “Abject Failure” by Law Enforcement

According to the class action complaint, which names the Uvalde Consolidated Independent School District (CISD), the Uvalde CISD Police Department, the Uvalde Police Department (UPD), principal Mandy Gutierrez, CISD Police Chief Pedro “Pete” Arredondo, and other individuals as defendants, any lack of accountability is unacceptable. The lawsuit says that CISD “employed its own police department” and had participated in a state-sponsored and mandated active shooter response training, in addition to having “promulgated its own required protocols and standards to employ in the event of an active shooter on one of its campuses.”

Despite such preparedness, the CISD police department, along with similarly trained law enforcement agencies including the City of Uvalde’s police department (“UPD”), the Texas’ Department of Public Safety (“DPS”), San Antonio Police Department’s SWAT unit, Uvalde’s Sheriff’s office, and the United States Department of Homeland Security (“Border Patrol” & “BORTAC”), fundamentally strayed from conducting themselves in conformity with what they knew to be the well established protocols and standards for responding to an active shooter.

Thus, on account of such abject failure by such highly trained law enforcements agencies, Plaintiffs and the putative Class members will now be forced to endure the indelible and forever-lasting trauma that Defendants immeasurably caused and amplified on account of their contemptible and flagrant affirmative conduct in failing to undertake prescribed courses of action. Plaintiffs and Class members respectfully request that this Court does its part in providing the framework for redressing the harms that no amount of money nor forgiveness can ever absolve.

The lawsuit details what it says are failures at every step, including the lack of a campus-wide warning on the school’s alert system — allegedly due to a “well acknowledged and persistently bad Wi-Fi signal on the campus” — as well as faulty door locks, inaction by UPD first responders, and grave missteps by CISD Police Chief Arredondo, who, according to the lawsuit, “discarded his police radio” after leaving his squad car, which “precluded his ability to perform his role of incident commander who was required to set up a communication command center.”

The complaint also describes confusion over whether officers were in an “active shooter situation” which led to even further delay in responding.

“Defendant officers knew or had reason to know that they were confronting an active shooter situation and not a barricaded subject situation,” the complaint says. “Sgt. [Daniel] Coronado knew this to be the case but nevertheless erroneously designated the situation as a non-active shooter scenario.”

The lawsuit is seeking $27 billion in damages. It also requests a declaratory judgment that the school and police officials’ “policy, practice and custom of failing to undertake and comply with the state mandated and district required protocols and standards for protecting against and responding to an active shooter” violated the survivors’ 14th Amendment Due Process rights, an injunction barring the CISD and the City of Uvalde from “continuing its policy and custom of noncompliance” with district and state protocols, and requiring the implementation of improved policies, programs, and training.

The class action complaint comes on the heels of a separate lawsuit filed Monday by Sandra Torres, whose 10-year-old daughter Eliahna Torres was killed in the attack.

Torres, with the help of gun-control advocacy group Everytown for Gun Safety, is also suing the Uvalde CISD, CISD police, Uvalde Police, the Texas Department of Public Safety, and other individuals. She has also named gun manufacturer Daniel Defense and Uvalde gun store Oasis Outback, which sold weapons Ramos ahead of the attack.

“[H]ow did Salvador Ramos, who had never previously used a firearm, come to buy an assault rifle manufactured by Daniel Defense, a company that most Americans had not heard of before the Uvalde shooting?” the complaint says. “Through a foreseeable and entirely preventable chain of events set in motion by Daniel Defense.”

According to the complaint, Daniel Defense developed targeted ads and marketing efforts aimed directly at people like Ramos:

Salvador Ramos was an ideal customer for Daniel Defense: young, isolated, troubled, and violent. Daniel Defense directed marketing towards this demographic by using militaristic imagery to suggest that civilian consumers could (and should) use their weapons the way service members are sometimes asked to: to engage in offensive combat missions directed at other humans. They furthered this message by placing their products in Call of Duty, and then using social media like Instagram to amplify their product placement, even suggesting that consumers reenact the video games in real life with their products in hand. Thus, it was no accident that a young man with a history of violence who associated the military with killing people and was fascinated with Call of Duty purchased a Daniel Defense AR-style rifle to perpetrate this horrific crime.

As to Outback Oasis, the complaint says that any reasonable store clerk would have thought twice before selling to the gunman.

“It was apparent to multiple individuals who saw Ramos in Oasis Outback that he was not fit to purchase firearms,” the complaint says. “One customer who saw Ramos at the store remarked that Ramos looked like a school shooter. The owner of Oasis Outback questioned this quiet loner, dressed in all black, on how he could afford the guns and ammunition he was purchasing. But knowing there were these reasons to be concerned, including that Ramos was in a big hurry to acquire thousands of dollars of deadly weaponry within days of turning 18, Oasis Outback nevertheless sold and transferred to him enough guns, accessories, and ammunition to fight off a small army — or, as it tragically turned out, slaughter 19 children and two teachers.”

The complaint says that as a federal firearms licensee, Oasis Outback “had a legal duty to not sell guns to prospective purchasers who it knew, or reasonably should have known, planned to use them to harm others. Given the many obvious red flags, it was a reckless dereliction of that duty for Oasis Outback to complete Ramos’s transactions.”

Like the class action lawsuit, the complaint then details the many failures on the part of law enforcement to organize and effectively intervene as Ramos carried out his attack. It alleges negligence on the part of Daniel Defense, negligent transfer and negligent sale on the part of Oasis Outback, unlawful seizure on the part of the law enforcement officials — for “using force to involuntarily confine Eliahna, and other students and teachers, inside classrooms 111 and 112 with Ramos” — and other constitutional violations, and wrongful death. It seeks an undetermined amount of compensatory and punitive damages.

“The shooting in Uvalde was a horrific tragedy – and wholly preventable,” said Eric Tirschwell, executive director of Everytown Law, in a press release announcing the lawsuit. “The massacre that killed Eliahna Torres and 20 others that day wasn’t just an act of one violent, troubled young man armed with an assault rifle. There are several actors responsible for putting the gun in his possession and failing to protect the children he attacked. This lawsuit is intended to hold them accountable.”

“There are no words to adequately express our deepest condolences to all the families who lost a loved one on May 24,” Anne Marie Espinoza, communications director for the Uvalde school district, said in a statement. “Uvalde CISD cannot comment on or provide information about pending litigation. As a district, we focus on supporting our students and their families as we continue to navigate these unprecedented times.”

“The City has not been served and does not comment on pending litigation,” a spokesperson for Uvalde told Law&Crime in an email.

Parents of Uvalde students who were injured in the attack filed a $100 million lawsuit against Ramos’ estate in June.

Editor’s note: This story has been updated to reflect the response from the city of Uvalde.