Beto O'Rourke Lashes Out at Gov. Greg Abbott in Uvalde 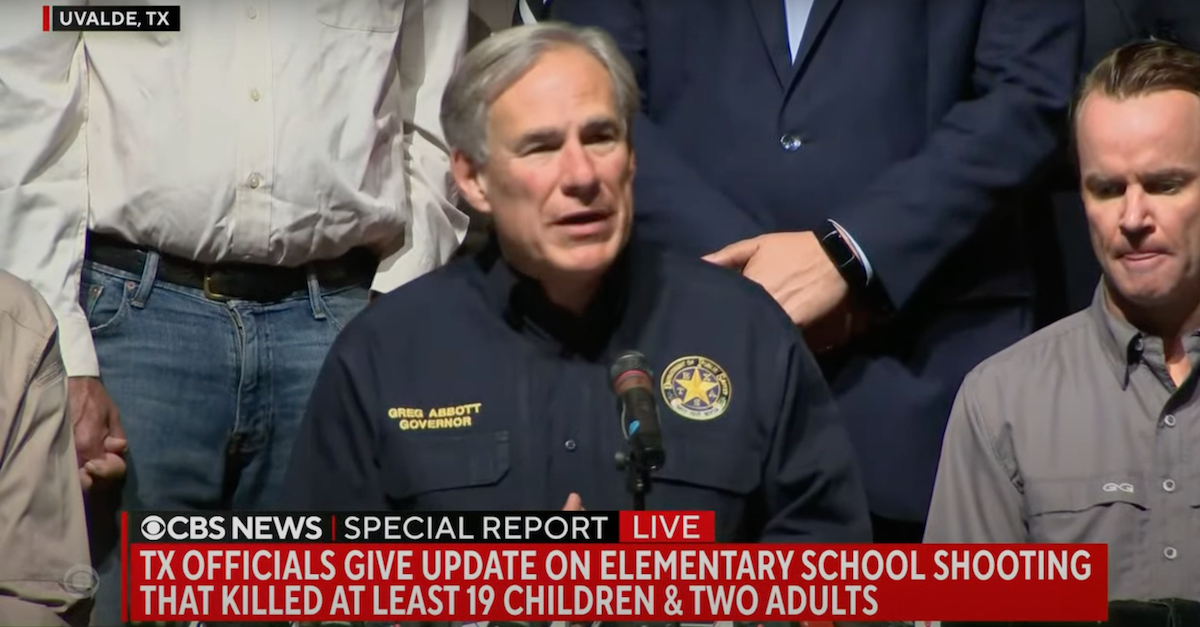 Gov. Greg Abbott (R) speaks on May 25, 2022, about a massacre at an elementary school in Uvalde, Texas, the day prior.

The Texas Rangers are leading an investigation into a massacre at an elementary school on Tuesday, Gov. Greg Abbott (R) said during a Wednesday afternoon speech. Other state, local, and federal officials are also involved in a sprawling probe into the actions and motives of Salvador Rolando Ramos, an 18-year-old U.S. citizen and high school dropout who Abbott and other officials earlier named as the dead perpetrator of the Tuesday crime spree. Ramos “may have had a juvenile record” but had no adult record, Abbott said; he said Ramos used an AR-15 and 223 rounds.

“There was no known mental health history of the gunman,” according to Abbott, who then proceeded to say local leaders complained to him about the lack of mental health resources in their community just prior to the speech.

Some interpreted the overall tone of the speech as a suggestion or insinuation that mental health issues were the cause of the shooting, but the governor pivoted to suggest that survivors and law enforcement agents working the case needed to avail themselves of mental health checks in order to carry on. The governor did not explicitly say whether the shooter could or should have availed himself of mental health services, where those services might have been or might be provided, or what the outcome of those services might have entailed.

Abbott also called for a law enforcement presence in schools after explaining that police were in the school but failed to immediately stop the gunman’s attack.

Abbott said the gunman shot his grandmother in the face, but the grandmother survived and called police. As the gunman fled in his car, he “had an accident” outside the school. The gunman ran into the school and was approached by school police officers, Abbott said. (Texas school districts can employ their own police departments.) The officers “engaged with the gunman,” but the gunman ducked into a back door, went down a couple of short hallways, and entered a classroom, Abbott said. The classroom was connected to another classroom. Abbott didn’t describe precisely how or where the children were shot, but he did say a border patrol agent shot and killed the gunman.

Nineteen children and two faculty members were killed, Abbott said. Seventeen others were injured, but their injuries are not life threatening, the government indicated. Three of the injured were law enforcement officers. The governor said some parents were “still striving to make a connection” — an apparent response to reports that some of the children were mutilated beyond recognition and that DNA tests were necessarily to match them to relatives.

“Our job is to ensure that the community is not going to be ripped apart,” Abbott said earlier.  “What they need more than ever is our love.”

The governor suggested that the crime was almost wholly unforeseeable.

“There was no meaningful forewarning of this crime,” Abbott said, except for a Facebook post by the gunman about 30 minutes before he approached the school.

A Facebook spokesperson told the New York Times that Abbott was apparently referring to “private messages,” though the governor did not make that distinction in his speech.  The Times also said that it was unclear whether the messages referenced were actually sent on Facebook or on some other platform.

Abbott estimated that third and final post occurred about 15 minutes before the school was attacked.

“Whenever anything as shocking and as extraordinary and as disturbing as this event is occurs, there is an urgent need for everybody affected to access mental health,” Abbott continued.

When the governor concluded his remarks, his challenger, gubernatorial candidate Beto O’Rourke (D), stood up and lashed out. 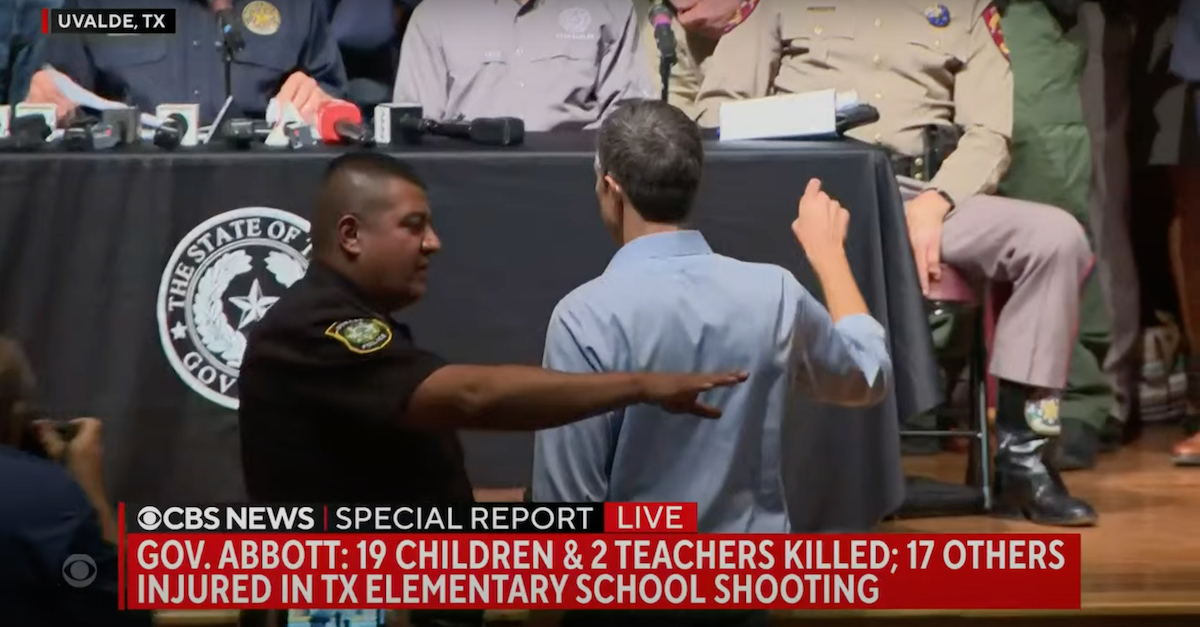 “Sit down! You’re out of line and an embarrassment!” Lt. Gov. Dan Patrick (R) appeared to say back to O’Rourke.

“You’re doing nothing!” O’Rourke yelled back at the panel.

“Sir, you are out of line!” someone standing on stage to the left of the governor and the lieutenant governor yelled back at O’Rourke. “Please leave this auditorium!  I can’t believe you’re a sick son of a bitch who would come to a deal like this to make a political issue!”

“This is on you!” O’Rourke appeared to yell back after officers and spectators surrounded him.

After the outburst, Abbott said Americans needed to focus on “healing and hope” for the hearts of those who suffered a loss. In a tone bordering on anger, he said Texans needed to “set aside personal agendas” and “help those who have been hurt.”

Law&Crime has previously explored the difficulty of using mental health solutions as a prophylactic for mass shootings.

Earlier in the speech, the governor characterized law enforcement officers of “running toward gunfire” to “save lives” and “eliminate the gunman.”

“They were able to save lives; unfortunately, not enough.”

[Editor’s note: this piece has been updated to include comments from Facebook which questioned Abbott’s assertions about the type of messages sent.]