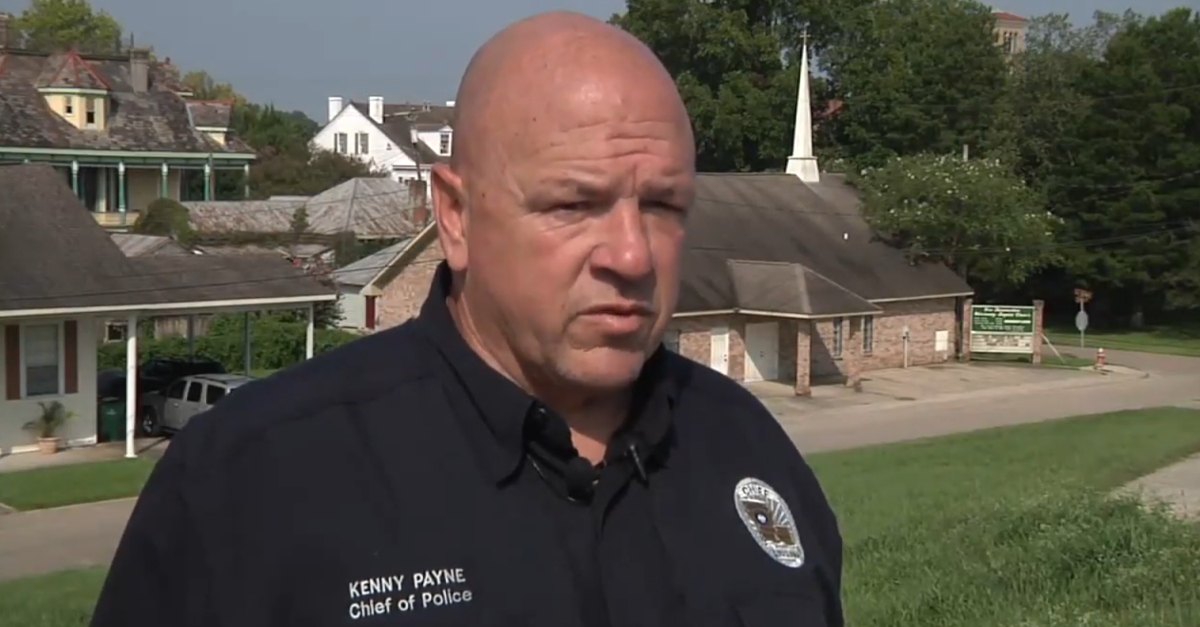 A now-former police chief in Louisiana has avoided jail time by conceding to allegations that he demanded oral sex from a woman in exchange for dropping a criminal case against the woman’s boyfriend. Kenneth C. Payne, the former chief of police for the City of Plaquemine, earlier this week pleaded no contest to two counts of malfeasance in office and officially announced his retirement from that office, local authorities confirmed to Law&Crime.

A plea of “no contest” means the defendant concedes that prosecutors have enough evidence to convict him of the charged crimes without actually admitting guilt. From a legal and sentencing perspective, it is effectively the same as pleading guilty for the defendant.

In an email to Law&Crime, Ellie Hebert, the city’s communications director, said that Payne on Monday submitted his letter of resignation to Plaquemine Mayor Edwin M. Reeves. The note, handwritten on looseleaf notebook paper, was obtained by Law&Crime and reads as follows:

Effective today Nov. 20, 2022, I am retiring from my position as Chief of Police of the City of Plaquemine. It has been an honor and privilege working with you.

Plaquemine Police Chief Kenny Payne has submitted his retirement letter to the City of Plaquemine effective today. I have been advised that the Mayor and Board of Selectmen have 20 days, beginning tomorrow (Tuesday, Nov. 29) to appoint an interim police chief.

I will call a special meeting within that 20-day period to make the appointment. The Interim Chief will serve in that capacity until an election can be held for Police Chief next year.

Payne last week turned himself over to authorities last Tuesday after a grand jury returned a true bill indicting him on five counts of felony malfeasance in office, Baton Rouge ABC affiliate WBRZ reported. The indictment came after multiple women accused him of using his office in an attempt to trade special preference for sex.

“I made it emphatic that he resign today both with the secretary of state and the mayor’s office,” District Attorney Tony Clayton reportedly told the station. “He has several days to get his personal belongings and stuff in storage and his office and can’t have contact with any employees in there.”

As previously reported by Law&Crime, court documents state that Payne in April asked a woman whose boyfriend had been arrested to bare her breasts and perform oral sex on him in exchange for reducing or dropping the man’s charges.

The woman reportedly read a victim impact statement on Monday and addressed Payne directly, saying, “I’m so glad I could keep you from doing this to anyone else,” WBRZ reported.

“It’s always a sad day when you have to arrest one of your own,” Sheriff Brett Stassi previously told Law&Crime. “But you’ve got to follow the law.”

The second count of malfeasance Payne pleaded to involved him asking Sheriff Stassi to drop the charges filed against him.

“I told Kenny [Payne] there’s not any ‘we’ in this, so I called the district attorney and the attorney general, and I turned it over to them,” Stassi said Monday morning, according to a report from the Plaquemine Post South. “Kenny then called me the following day and said he wanted to apologize and said that he shouldn’t have put me in that spot.”

Payne received a three-year suspended sentence and one year of probation.