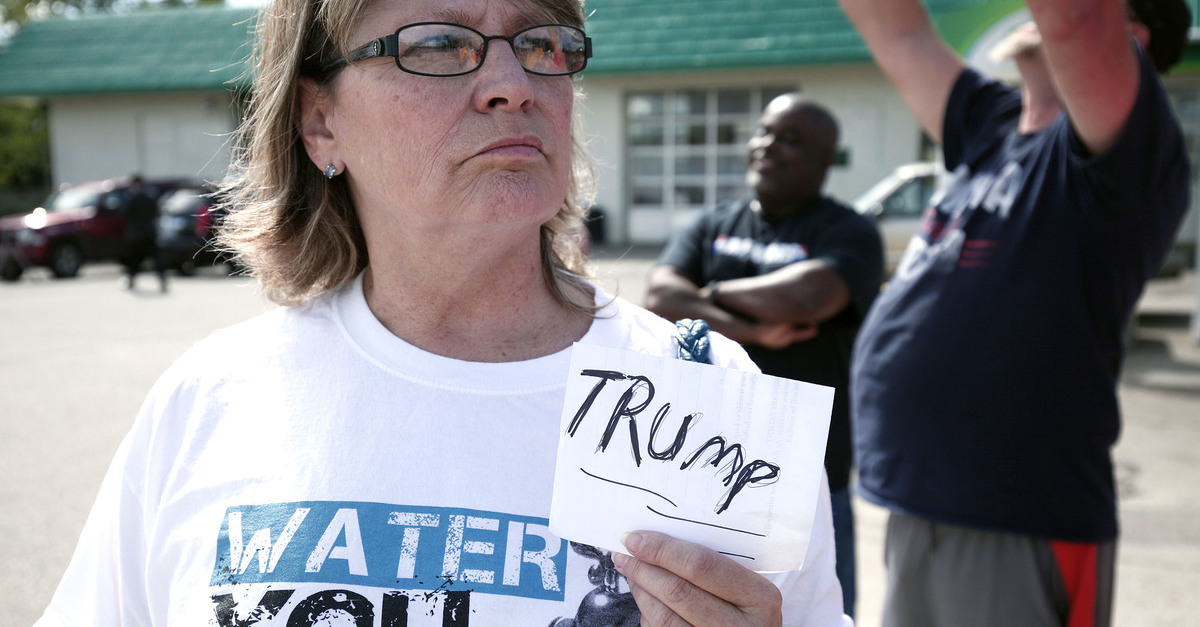 The Sixth Circuit just sided with mother and child plaintiffs in a lawsuit over the Flint water crisis, and four Trump-appointed judges were determined to put their disagreement on the record. Thursday’s ruling was on a petition for re-hearing en banc from a three-judge panel of the 6th Circuit Court of Appeals to the full, 16-judge Sixth Circuit.

Shari Guertin and her minor daughter sued former Michigan Governor Rick Snyder along with other Flint and Michigan officials. The lawsuit seeks to hold the officials responsible for injuries the mother and child sustained after drinking and bathing in lead-tainted water. In 2014, officials overseeing the water supply in Flint switched the water supply from the Detroit Water and Sewerage Department to the Flint River, without adding the proper chemicals. As a result, the city’s water supply became dangerously tainted, exposing more than 100,000 people to lead.

Defendants to Guertin’s lawsuit raised what is usually a strong defense: government officials are typically immune from personal liability based on their professional mistakes. Indeed, governmental immunity can be a pretty strong shield – but it still has limits.

The limit that applies to the Flint officials’ behavior is a high bar: an official’s violation of a person’s rights must be so egregious as to “shock the conscience,” in order to wipe out the official’s immunity. The “shock the conscience” requirement is a specific legal and Constitutional standard, applied to immunity cases by Supreme Court Justice Felix Frankfurter; it describes conduct that is so bad that it offends “canons of decency and fairness which express the notions of justice of English speaking peoples. “ Sure, Frankfurter’s 1952 words seem a bit dated and xenophobic, but you get the picture. To lose immunity, a government official’s behavior has to be worse than even grossly negligent; it has to be so bad that it would offend anyone paying attention.

As high a bar as “shocks the conscience” is, the Flint situation met it – at least as far as the Sixth Circuit was concerned. Writing for the majority of a three-judge panel, Circuit Judge Richard Griffin wrote that the defendants, “created the Flint Water environmental disaster and then intentionally attempted to cover-up their grievous decision. Their actions shock our conscience.” Judge Griffin went on to note the horrendous facts that underlie the case. “If ever there was an egregious violation of the right to bodily integrity,” he wrote, “this is the case.”

Flint officials, however, sought another bite at the immunity apple, and petitioned for a re-hearing on the immunity issue. They were out of luck. On Thursday, the full 16-judge Circuit said it wasn’t interested in reconsidering the ruling on immunity.

Unusually, the court chose not to hand down a majority opinion along with its ruling. There must have been some major behind-the-scenes drama, though. Two judges wrote concurrences, one wrote a dissent, and others joined those opinions as it suited them.

The dissent was penned by U.S. Circuit Judge Raymond Kethledge, a George W. Bush appointee, and was joined by Judges Amul Thapar, Joan Larsen, John Nalbandian and Eric Murphy – all Donald Trump appointees. Their opinion on the Flint water crisis can be reduced to, “too bad, so sad.”

Judge Kethledge’s dissent began with a blunt dismissal of the public outrage over the Flint crisis:

To state the obvious, the sympathies of every decent person run entirely to the plaintiffs in this case. But sometimes the law, evenhandedly applied, leads to a result contrary to the crush of popular opinion. This is one of those cases.

The dissent went on to attack the prior decision on immunity from a constitutional standpoint, arguing that whatever suffering the plaintiffs endured, they hadn’t really been deprived of due process. The mishandling of the water supply didn’t, as the Court had found, constitute “forcible intrusions on their bodies against their will.”

According to Judge Kethledge, the Sixth Circuit went way too far, creating a constitutional right that simply doesn’t exist – the “right to be free of unwanted substances.” According to the dissent, such a right couldn’t possibly exist, because if it did, it would be “violated every day, indeed every time that virtually any of us takes a breath.” Accordingly, so said the dissenters, those responsible for the Flint water crisis should have been entitled fall back on immunity as a total defense to personal liability.

The dissent in Guertin v. Michigan, joined by all four Trump appointees, is especially interesting in light of this week’s legal fallout over the Alabama, Georgia, and Missouri’s abortion bills. Those statutes seek to expand the legal definition of personhood, as well as the corresponding rights of the unborn, in direct contravention of what the Supreme Court of the United States held in Roe v. Wade. But in the context of tort liability for unwitting victims of government malfeasance, this particular group of judges warns that judicial expansion of substantive due process rights is “exactly what the Supreme Court has repeatedly told us not to do.” Whether other Trump-appointed judges will demand the same adherence to precedent, or will be equally wary of other expansions of due process rights, remains to be seen.