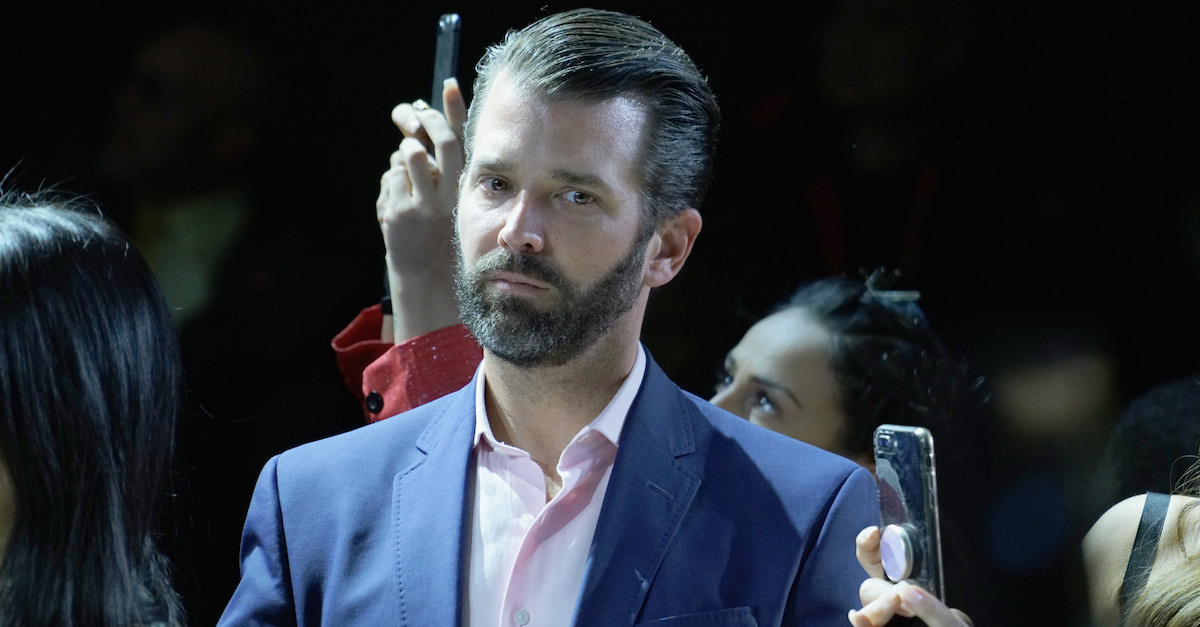 On the heels of Senate Judiciary Chairman Sen. Lindsey Graham (R-S.C.) advising President Donald Trump‘s oldest son Donald Trump Jr. to just take the Fifth and be done with it, Trump Jr. has reached a deal to testify before the Republican-led Senate Intelligence Committee about Russia-related topics. If Trump Jr. does end up asserting his Fifth Amendment right, it will undoubtedly lead many to ask the same question: Doesn’t the president believe that only the guilty take the Fifth?

Anonymous sources familiar with the agreement Trump Jr. reached with lawmakers have told various news outlets that the president’s son will testify in mid-June for two to four hours on five or six topics. This is notable because it means that, to some degree, Trump Jr. has successfully limited the scope of the questioning.

Top Senate Republicans were not pleased that fellow Republicans [Chairman Sen. Richard Burr (R-N.C.)] had asked for Trump Jr. to testify about something they declared to be “case closed”; nor were they pleased that Trump Jr. could very well have been slapped with a contempt citation if he refused to comply with a subpoena to appear. Along the way, the aforementioned Sen. Graham pointed out the obvious: we have a case of Schrodinger’s Witness on our hands.

Graham noted that Trump Jr. could testify and not testify at the same by taking the Fifth.

“You just show up and plead the Fifth and it’s over with,” he said. For this, Graham received a round of criticism.

Just like that — out goes the subpoena threat, out goes the contempt threat, in comes the opportunity to answer questions about topics that were agreed upon in advance, and in comes an opportunity to take the Fifth. It remains to be seen if the topics Trump Jr. agreed to address will result in him actually taking the Fifth. Before the agreement was reached, it was reported that Trump Jr. was considering either not appearing before lawmakers (i.e. defying the subpoena and risking contempt) or showing up and invoking his Fifth Amendment right.

If it comes to taking the Fifth–and we will allow for the possibility that it won’t–President Trump’s past comments about the Fifth Amendment will almost certainly be resurrected.

While campaigning in 2016, just two months before the election, President Trump asserted that the “mob takes the Fifth.”

TRUMP in September 2016: "The mob takes the Fifth. If you’re innocent, why are you taking the Fifth Amendment?" pic.twitter.com/xuta4kGVuz

“If you’re innocent, why are you taking the Fifth Amendment?” he asked. Trump offered “free advice” in the past to since-convicted sexual assaulter Bill Cosby.

I am no fan of Bill Cosby but never-the-less some free advice – if you are innocent, do not remain silent. You look guilty as hell!

“Do not remain silent,” Trump said. “You look guilty as hell!”

As far as Graham is concerned, it’s worth adding that, 20 years ago, he once said the following: “The day Richard Nixon failed to answer that subpoena is the day that he was subject to impeachment.”

It’s not the first time something Graham said 20 years ago caught attention in recent weeks for being an unmistakable 180 on the subject of impeachment.