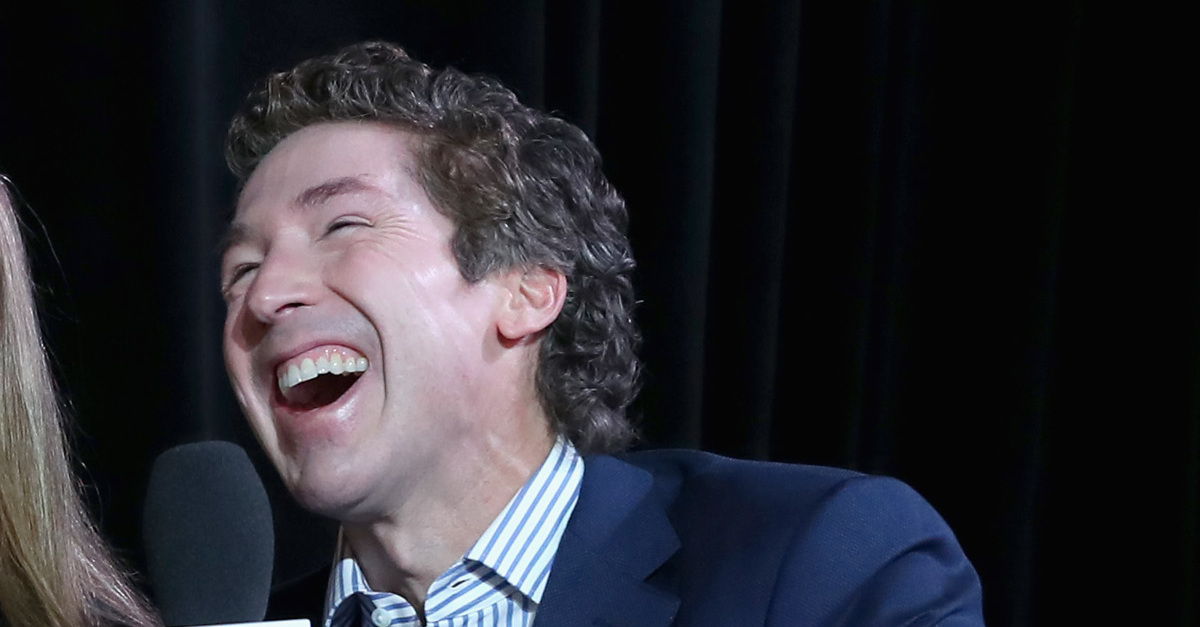 For today’s holiday edition of waste, fraud, and abuse, #JoelOsteen is trending. Sing it with me: “It’s beginning to look a lot like grifting.” Megachurch pastor Joel Osteen made headlines this time for saying he hadn’t received federal CARES Act funding, then his church actually got $4.4 million in federal aid.

Earlier this year, Lakewood officials said that they had not applied for a loan through the PPPhttps://t.co/xe6L8HIyl3

The U.S. Small Business Administration data was released in early December, and it showed that Lakewood Church got its PPP loan through Bank of America.

Some may wonder how it’s even possible for churches to qualify for massive federal funding. That one’s got an easy answer: Congress included them. In fact, despite Congress choosing to leave out small business that it deemed unworthy of help, it specifically included churches and other religious institutions in CARES Act funding.

Under the rules Congress set out, many religious institutions were able to secure Paycheck Protection Program (PPP) funding. For some scale: the U.S. Catholic Church received somewhere between $1.4 billion and $3.5 billion under the program, according to an analysis by the Associated Press, using data provided by the Small Business Administration (SBA). Multiple evangelical churches received millions as well.

Data released by the United States Department of Treasury showed that as of last June, 88,411 religious institutions had already received PPP funding totaling $7.3 billion. According to Small Business Association CARES Act loan requirements, “For PPP loans, 501 (c)(3) organizations with 500 or fewer employees (full and part-time) that have been in operation as of February 15, 2020, are eligible to apply without regard to whether they are religious or secular.”

Osteen’s Houston church is the largest megachurch in America, with weekly attendance over 43,000 in normal times. COVID-19 guidelines have now cut attendance down to 25-percent capacity. Osteen’s weekly television program boasts over 13 million viewers in over 100 nations around the globe.

David Iloff, a spokesperson for Lakewood Church, issued a statement explaining Osteen’s public denial about receiving government assistance. Iloff told press, “Believing the shutdown would only last a few weeks, Lakewood did not initially apply for PPP assistance during the first half of the program. However, as the shutdown persisted month after month, given the economic uncertainty, Lakewood finally applied for the PPP loan and has been able to provide full salaries and benefits including health insurance coverage to all of its employees and their families.”

Whatever Osteen’s explanation surrounding his statements, it’s tough to square the pastor’s prosperity gospel rhetoric with his need for millions in government aid to stay afloat. Then again, maybe it does all fit together as part of a larger narrative.

Joel Osteen’s ridiculously huge mansion, paid for by the gullible and naive.

So humble. Jesus would be proud 🙄 pic.twitter.com/dCePFshyAi

I’m not surprised that Joel Osteen lied about receiving $4.4 million in PPP federal funds. This is the same guy who closed his church to the displaced in Houston after Hurricane Harvey and lied about flood damage. We had to publicly pressure him to open his doors. pic.twitter.com/ygGwt4OTla

… as well as a firm grasp on economic consistency.

One thing is for sure, though. Osteen was hoping to trend during the final shopping days before Christmas—just for an entirely different reason.

Defund Joel Osteen. What in the hell is this?!?! pic.twitter.com/smg1ozJhRM

Televangelist Joel Osteen wants to sell you an Inspiration Cube to compete with Amazon’s echo. For a small tax-deductible donation, you can have America’s largest megachurch listening in on your every conversation. For those with ears to here – https://t.co/RkfOH7MKwx

Representatives for Lakewood Church did not immediately respond to Law&Crime’s request for comment.