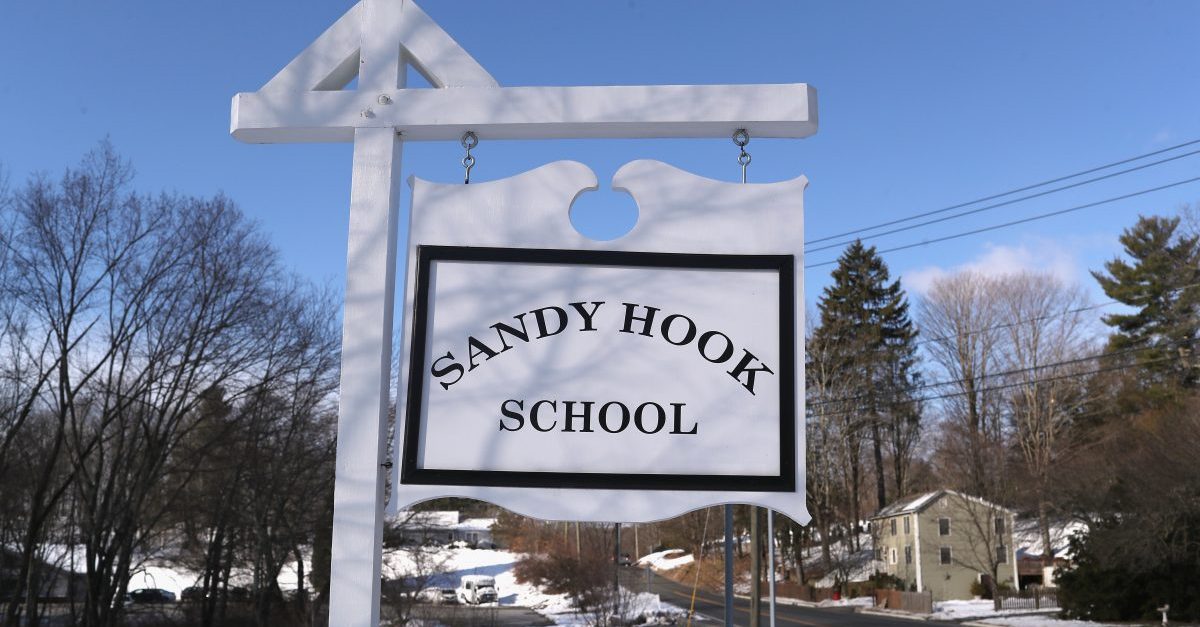 As the 10-year anniversary of the mass shooting approaches, families of Sandy Hook victims have been racking up a string of legal victories. Nine of them reached a $73 million settlement last week with insurers for the arms manufacturer Remington, the maker of the Bushmaster AR-15-style rifle that gunman Adam Lanza used in the massacre.

In her soon-to-be-released book “Sandy Hook: An American Tragedy and the Battle for Truth,” New York Times feature writer Elizabeth Williamson charts the families’ longstanding litigation against InfoWars broadcaster Alex Jones, who defaulted late last year on a string of lawsuits about his conspiracy theory that the shootings that killed 26 people inside the elementary school—plus the gunman and his mother—did not happen.

Discussing the book on the latest episode of Law&Crime’s podcast “Objections: with Adam Klasfeld,” Williamson describes Sandy Hook conspiracy theories as a template for others to come.

The book largely follows the journey and anti-misinformation mission of father Lenny Pozner, whose son Noah was shot to death in 2012. Before suing Jones for defamation, Pozner routinely filed copyright claims to take the conspiracy theorist’s broadcasts offline, and he formed the non-profit, the HONR Network, to push for the removal of such content from Facebook, YouTube, Twitter and other social media platforms.

Understanding that Sandy Hook conspiracy theories were “not a one-off,” Pozner saw that the problem would endure long after “battle over gun legislation in the aftermath of Sandy Hook started to fade,” Williamson said.

In addition to providing insights into Pozner and other Sandy Hook parents, Williamson’s book also delves into the world of the conspiracists. She interviews Jones and the fringe academics attempting to give the misinformation a patina of intellectual respectability.

For Williamson, her interview with Jones fell during a “really strange week” in 2018.

The Times writer had been in the Lone Star State for two hearings: one in Pozner’s case and the other in Alex Jones’s custody battle with his ex-wife, Kelly Jones.

“I went to the hearing, and she told me when I interviewed her that they had hearing in family court the day after the hearing in the Pozner case,” Williamson recalled. “So I thought, ‘Well, okay, I’ll go because I know he’ll be there. And I’ll just see if he’ll talk with me,’ because he had not been responding to my contact efforts.”

In a breakthrough, Jones agreed and supplied Williamson with what he described as the unlisted address of his InfoWars headquarters.

“He likes to say that it’s secret that no one knows where Infowars is based. But when I got in the Uber and I gave the address, the driver said, ‘Oh, that’s Alex Jones’s operation. I used to drive for UPS. And oh, they all think it’s so secret,'” she recalled, laughing. “But it wasn’t.”

Then, Jones agreed to face the scrutiny of the U.S. paper of record.

“Talking with the Times, this would be the hill he dies on, that if I can’t portray him fairly and accurately, that was going to be it. But I’m going to talk to you, and I’m going to see what comes out the other side,” she recalled. “So, he was very ‘on’; it was a little bit like watching his show.”

She noted that Jones’s temperament has proven to be a courtroom liability, both in the Sandy Hook litigation and his custody battle with his wife.

“He just couldn’t get out of his own way, and this is kind of what happens to him time and time again,” she said. “He would roll his eyes in court. He would tell the her lawyer that he didn’t trust him. He would make noises that were strange. He just he was completely contemptuous of the process.”

Just as he lost sole custody of his children through such antics, Jones had orders of default issued against him in the Sandy Hook litigation for ignoring court orders. Williamson said that she plans to attend trials in the spring to determine how much Jones will owe the families in damages.

Though her book focuses primarily on misinformation in the wake of Sandy Hook, Williamson’s research also brought her penetrating insights into the families’ litigation against Remington. For example, she noted how a breakthrough in the case came through their top attorney’s adventures in parenting.

“Josh Koskoff, who was the lead lawyer in that case, he knew that this marketing was everywhere because he actually played ‘Call of Duty,’ the combat video game, with his kids,” Williamson noted. “And so he saw the Bushmaster weapon in that.” And they started looking at all of the ways in which Bushmaster or Remington advertise the Bushmaster rifle, which was used in the shooting. And they were able to tie a lot of these loose ends together, this really macho advertising that was meant to appeal to troubled young men like the gunman at Sandy Hook.”

Williamson’s book will be released on March 8.