‘One Step at a Time’: Lawyer Who Grilled Marjorie Taylor Greene Opens Up on ‘Insurrection’ Candidacy Challenges and Whether Donald Trump Is Next 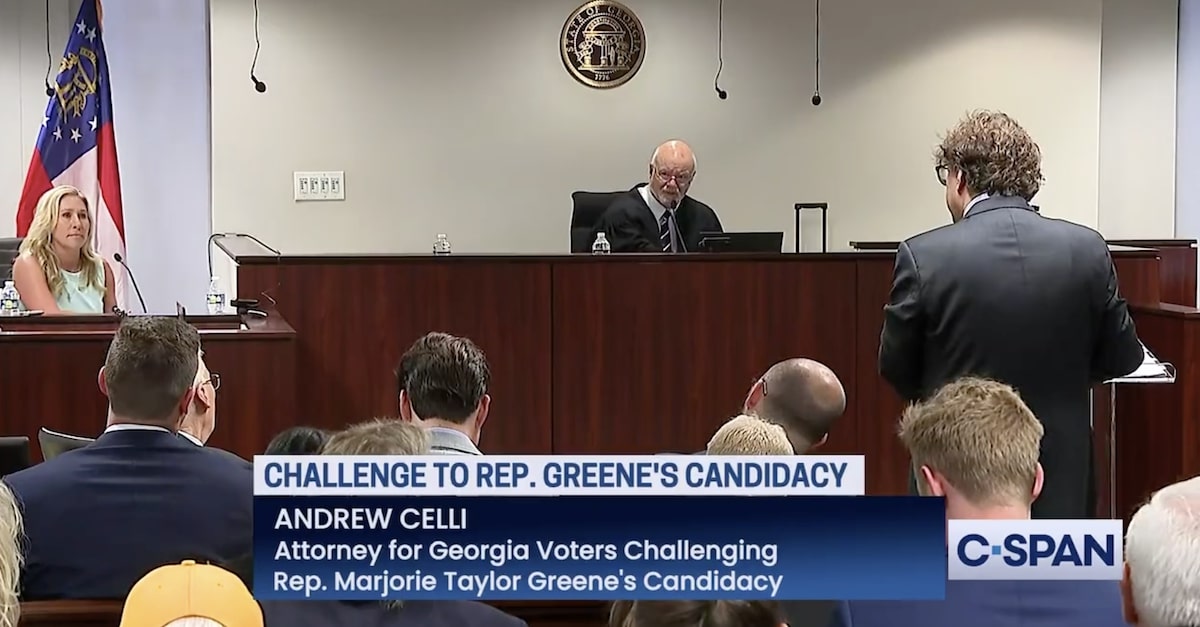 Across the country in Georgia, Arizona, and North Carolina, candidacy challenges have bubbled up in courthouses seeking to knock politicians off the ballot for their alleged support of “insurrection” on Jan. 6. On Friday, the challengers advanced farther than ever before toward that goal in a evidentiary hearing in Atlanta, where Rep. Marjorie Taylor Greene (R-Ga.) had been forced to testify under oath about her activities before the attack on the U.S. Capitol.

The lawyer who faced off against Greene inside that administrative courtroom opened up on his interrogation in the latest episode of Law&Crime’s podcast “Objections: with Adam Klasfeld,” tackling such questions as the historical meaning of insurrection and whether candidacy challenges like these are leading up to an effort to disqualify Donald Trump in 2024.

“One step at a time,” remarked attorney Andrew Celli, in an interview recorded two days after he went toe-to-toe against Greene.

“Prevaricated in a Variety of Ways”

At the heart of the candidacy challenges is the third section of the 14th Amendment, ratified after the Civil War and barring anyone who swears an oath to the Constitution from engaging in or aiding an insurrection against it. Greene took her oath of office on Jan. 3, 2021, and for the challengers, her actions over the ensuing three days was enough to trigger that constitutional remedy. A federal judge already has allowed them to advance that challenge on the law.

“When I confronted her with her own statements from the past, she prevaricated in a variety of ways. ‘Can’t remember.’ ‘Not sure.’ She questioned the source. If there were quotations in an article out of CNN or the New York Times, she would say that the source was corrupted and fraudulent,” Celli said.

In an extraordinary example, Greene claimed that she could not recall whether she urged Trump to declare martial law during her first week in office, a proposition that Celli ridiculed.

“I just was really busy. I just don’t remember whether I did or not,” Celli said, paraphrasing the congresswoman. “That really struck me as lacking in credibility.”

A day after the interview, a massive leak of text messages sent or received by Trump’s ex-chief of staff Mark Meadows appeared to validate Celli’s skepticism. The trove, consisting of more than 2,300 texts, showed Greene telling Meadows about congressional discussions about Trump possibly declaring “Marshall law,” misspelling the concept. That missive was dated Jan. 17, 2021, three days before President Joe Biden’s inauguration, and Greene’s challengers recently asked the administrative law judge presiding over the case to consider it.

Asked whether Greene perjured herself, Celli replied that is for prosecutors to decide.

Greene’s attorney James Bopp, a longtime Republican lawyer behind the Citizens United precedent, vigorously denied that his client was untruthful. He has asserted several defenses for Greene and other pro-Trump politicians whose candidacies are being challenged. In an effort to define the cases out of existence, Bopp has argued that Jan. 6 was a riot, not an insurrection.

“A Really Important Statement About the Rule of Law”

To fortify the historical context of Jan. 6, the challengers called Indiana University Law Professor Gerard Magliocca as a witness, who likened the attack on the U.S. Capitol to the Shays’ rebellion and the Whiskey Rebellion of the 18th century.

“An insurrection is a violent uprising against the civil authority, usually by a mob that temporarily shuts down government functions in a way that a ordinary law enforcement cannot respond to,” Magliocca explains on the podcast.

The Shays’ rebellion, sometimes called the Shays’ insurrection, was a violent tax protest by farmers in late 1786 and early 1787. Groups of farmers armed themselves and went to local courthouses where the foreclosure sales would happen, shutting them down through intimidation until a state militia could restore the civil order. This pattern repeated later that century during the Whiskey Rebellion, a similarly violent protest by Pennsylvania farmers unhappy with a spirits tax that affected grain sales. President George Washington called the national militia to put down that particular insurrection.

As with Jan. 6, those insurrections targeted government buildings and temporarily shut down their functions. The attack on the Capitol did so in broad daylight, shutting down the joint session of Congress—unlike, for example, the Portland riots, which targeted a federal courthouse at night, when it was already empty, Magliocca noted.

Greene’s attorney has also asserted a First Amendment defense, claiming that the legal action puts the right to free speech and the ballot at risk.

“This is a particularly kind of nefarious argument, it seems to me, because it’s true that some of the things that Marjorie Taylor Greene did, taken out of context, or in a normal situation where she was not a federal official, would be perfectly appropriate and good,” Celli said.

If his arguments on the facts and the law persuade Administrative Law Judge Charles R. Beaudrot, Georgia Secretary of State Brad Raffensperger (R) will receive a recommendation to keep Greene off the ballot during the upcoming primaries. But Celli counts the fact of the hearing itself as a victory.

“What I can say is a historical fact is, it’s the first time that someone has been called to account at the leadership level for Jan. 6. Required to answer questions. Required to testify under oath. Required to explain herself, to the extent that she claims that she can remember things. And we view that as a really important statement about the Rule of Law, win, lose or draw. This is a person who is subject to the 14th Amendment of the United States Constitution.”

Listen to the podcast, below.