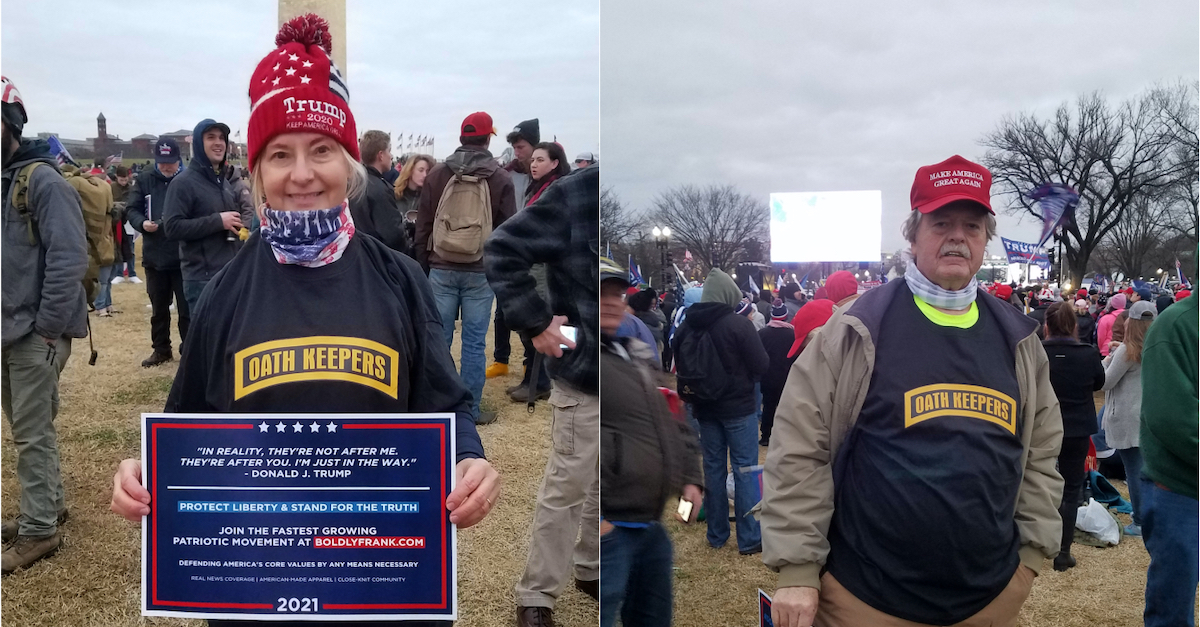 Sharon and Thomas Caldwell on Jan. 6, 2021, in photographs entered into evidence at the Oath Keepers seditious conspiracy trial.

Over the course of the Oath Keepers seditious conspiracy trial, attorneys for one of the oldest members from the group to be prosecuted have tried to recast him as an elderly bystander to the Jan. 6-related upheaval.

The wife of that defendant, Thomas Caldwell, colorfully expanded upon that theme on Monday, when she told a jury her husband wasn’t wearing body armor that day — by one definition.

“If you’re talking about ‘Depends,’ that’s what he was wearing,” Sharon Caldwell said, referring to the adult diapers brand.

Despite his defense’s focus on his age, Thomas Caldwell was 65 years old at the time of his arrest, just three years older than the minimum to qualify as a senior citizen. The Caldwells traveled together to Washington, D.C., where they were both seen sporting an Oath Keepers-banded T-shirt on the National Mall, in photographs entered into evidence by the government.

Sharon Caldwell, however, was not a member, and she testified that she only wearing the merchandise because it was a “free shirt” and allowed her to obtain admission into the VIP area. She identified her husband in the courtroom as the “handsome man” sitting at the defense table.

Her husband is one of five people currently standing trial on multiple serious charges, including seditious conspiracy to overthrow the U.S. government or the execution of any of its laws by force. Prosecutors say that Thomas Caldwell contributed to that effort in his capacity as a member of the Oath Keepers’ so-called quick reaction force, which assembled and stashed weapons inside a Comfort Inn in Arlington, Va.

Security footage from the hotel chain appears to show Caldwell and his accused co-conspirator Kenneth Harrellson carting boxes of weapons on a dolly. 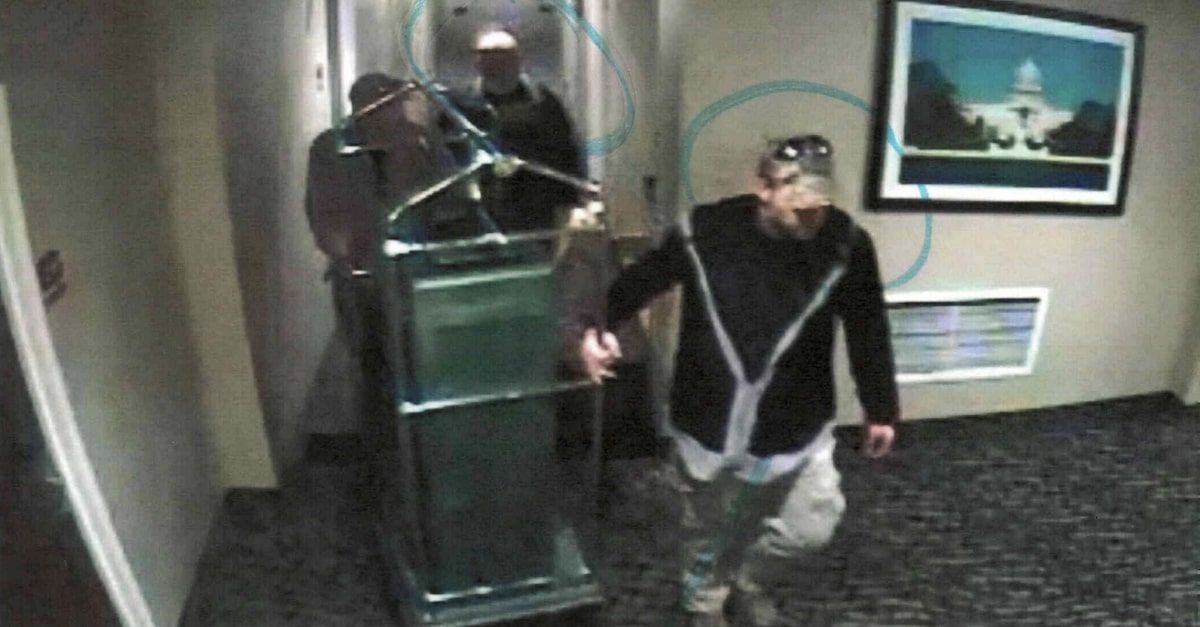 Sharon Caldwell freely acknowledged that she and her husband collect guns: The FBI found roughly 70 of them stashed in their home, she said. Agents did not seize their weapons at the time, but the court later issued an order barring her husband from having them.

She told a jury that her weapons were all legal, and her husband inherited some of them from his deceased parents.

“It’s just something I like to [do] for my own self-defense, it’s one of those skills that I wanted to have,” she cheerfully told a jury, adding it was also an activity she would do with her husband.

“We’ll go practice, and then, we’ll go bird-watching,” she said.

She denied that her husband had any intent to break the law or overthrow the government on Jan. 6, claiming that he had severe back pain that day from multiple surgeries. One of those, she said, required pinning her husband’s shoulder to keep it in its socket.

On cross-examination, Assistant U.S. Attorney Louis J. Manzo showed footage of the couple on Jan. 6th to undermine that portrait.

In the video, Sharon Caldwell could be heard chanting “Stop the Steal” and saying: “We are marching to the Capitol, and they better do the right thing.”

Pressed by the prosecutor, she acknowledged that she knew the certification of the election had been going on but denied any attempt to stop it.

“I was just having fun,” she said.

The prosecutor then turned her attention to her husband’s remarks on the tape: “I know where Pence lives up on Wisconsin Avenue. That punk ass better do what he’s supposed to.”

In another part of the footage, the witness could be heard saying: “Congress is gone because they are pussies.”

After the prosecutor quoted her making that remark, Sharon Caldwell giggled — and then she doubled down.

“I would say that many people in Congress are pussies, even today,” she asserted.

She said that her freedom of speech allowed her to say that.