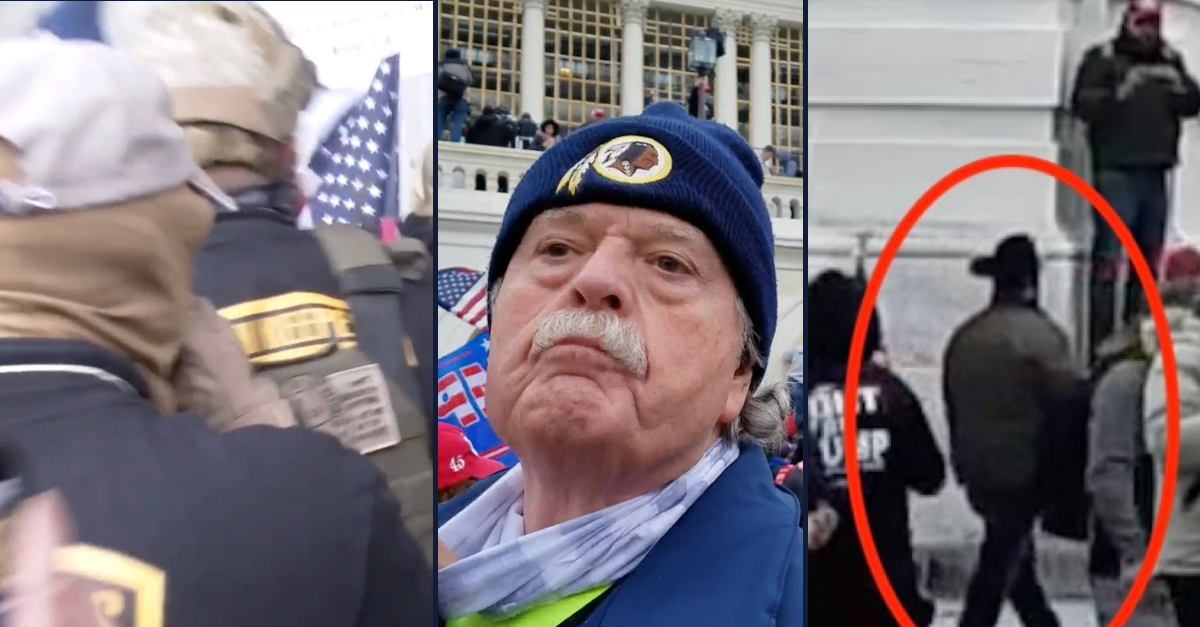 Left: the backs of Oath Keepers members, including Kelly Meggs (with patches on vest or backpack); Thomas Caldwell; Stewart Rhodes outside the U.S. Capitol on Jan. 6. (Images via government’s trial exhibits.)

An FBI agent who has been investigating the origins of the Jan. 6 attack on the U.S. Capitol building was the first government witness to testify at the seditious conspiracy trial against members of the Oath Keepers extremist group. She authenticated chilling communications among group leaders contemplating ways to keep Donald Trump in power, starting from the early days following the 2020 presidential election.

In his testimony on Monday and Tuesday, agent Michael Palian fielded questions from Assistant U.S. Attorney Kathryn Rakoczy, whose questions largely focused on records of group chats and text messages among Oath Keepers founder Stewart Rhodes and others, including co-defendants Kelly Meggs, Jessica Watkins, and Thomas Caldwell, in November 2020. They, along with co-defendant Kenneth Harrelson, are charged with seditious conspiracy and accused of plotting to use violence to stop Congress from certifying Joe Biden’s 2020 electoral win on Jan. 6.

Palian, who was part of a detail that escorted senators back to the Capitol after they were forced to evacuate that day, said that he has been part of the government’s investigation into the siege, and prosecutors relied on his expertise to help bolster their theory that defendants had been looking for an opportunity to disrupt the transition of power since it first appeared that Biden would win the election, and that Jan. 6 gave them that opportunity.

‘I Had My Helmet in My Hand. Guess What That Was For?’

One series of posts from Rhodes started on Nov. 4, 2020, the day after the presidential election and days before news networks declared Biden the winner.

“Well what’s the gameplan?” someone identified as Chris wrote at around 1:30 a.m. on Nov. 4 in a group chat titled “Old Leadership Chat.”

“1. Remain calm,” he said. “2. It ain’t over till it’s over. 3. Don’t give legitimacy to an illegitimate, fraudulent (fraud infested) system. 4. If that system declares Biden the winner, I won’t ever recognize him as a legitimate President because of that fraud (and to that add his corruption, his being a Chi Com puppet, and all the unconstitutional crap he plans to do. 5. Continue to plan to defeat the domestic enemies of the Constitution.”

“The left, including the Democratic Party, has taken off the mask and revealed their totalitarian, Marxist, America hating, and hate-filled agenda,” Rhodes wrote moments later. “They seek our destruction. They seek the destruction of all we swore to defend. We must defeat them. Even if one of them occupies the White House.”

That evening, Rhodes sent a message to the group indicating that the Oath Keepers are “establishing a QRF for DC” as well as “regional QRF’s in each major region of the nation,” asking for participants and support.

“We will get it done,” Rhodes said in the message.

“We aren’t getting through this without a civil war,” Rhodes wrote at around 11:14 a.m. the following day. “Too late for that. Prepare your mind, body, spirit.”

Palian also testified to the discovery of post-election messages from Watkins encouraging people to join the cause.

“Infowars/Alex Jones put out the call for all Conservatives go to every Statehouse in the country tomorrow at noon,” wrote Watkins in a Facebook message to someone Palian said was an acquaintance of Watkins named Daniel.

“I would but wife already has plans for me,” Daniel replied.

“Is this not more important?” Watkins wrote. “Is she a Trump voter? We are literally going to lose America, our democracy, our way of life if we don’t stand up.”

Days later, Watkins was encouraging people identified in her phone as “recruits” to prepare for something akin to battle.

“Take time off work in advance,” she wrote to one recruit on Nov. 9. “Jan. 3rd-9th. I need you fighting fit by innaugeration [sic].”

Nov. 9 was also the day that some 100 members of the Oath Keepers are believed to have gathered virtually for a conference call on GoToMeeting, which was partially recorded by someone on the call.

On the call, Rhodes was adamant that Trump not concede the election, and said that he hoped that the then-president would invoke the Insurrection Act.

“He doesn’t need to build some kind of complicated case about election fraud” in order to justify invoking the law, which has been interpreted to allow a president to “call” militias to help quell an insurrection. “And to get him to do that is he has to know that the people are behind him, that he will not be deserted. And he has to have positive pressure. So we’ve got to be in D.C.,” Rhodes also said adding that the members needed to be ready to face “Antifa” in a “street fight.”

“So our mission’s going to be to go into D.C., but I do want some Oath Keepers to stay on the outside and to stay fully armed and prepared to go in armed if they have to,” Rhodes also said on the call.

In response to a question during that call from Watkins about “less lethal” weapons, such as mace and pepper balls, Rhodes encouraged his compatriots to improvise.

“[I]t doesn’t hurt to have a lead pipe with a flag on it,” he said in response to Watkins’ question before offering an example of his own. “When I was walking through the streets of Portland, I was quote unquote unarmed, but I had my helmet in my hand. Guess what that was for? That was to whack someone right across the face if they’re going to come at me.”

“There’s ways of dealing with things that improvise as tools,” Rhodes said. In his opening remarks, Assistant U.S. Attorney Jeffrey Nestler had told jurors that Rhodes regularly spoke in “code,” using, for example, the word “tools” to mean “weapons.”

Prosecutors also shared election night texts between Meggs and his wife Connie Meggs, who is charged in a separate Oath Keepers case that does not include the seditious conspiracy allegation.

“Shut the fuck up you’re getting me stressed,” Connie Meggs wrote in response.

In his testimony on Monday, described a harrowing and chaotic scene inside the U.S. Capitol on Jan. 6, with some senators in tears after Donald Trump supporters had violently broken through police lines and breached the building, forcing lawmakers and staff to either evacuate or shelter in place.

Palian said that was part of a group of some 70 FBI agents tasked with walking around 80 to 85 senators from the location where they had been evacuated back to the Senate chamber via underground passages at around 7:30 p.m. on Jan. 6, as Congress prepared to resume its work.

“‘Shock’ would be the best word to describe what the senators were feeling at that point,” Palian said. “There was some crying, there was some running around. It was chaotic.”

“Did you witness senators or members of Congress crying?” Rakoczy asked him.

“I did,” Palian responded. He also testified that it “looked like a bomb had gone off” in the Capitol, with remnants of pepper spray and tear gas left on the floor and walls, broken windows, and “lots of debris in the hallway.”

The agent took a picture of what he said was the SWAT team that brought the senators back into the Senate chamber. 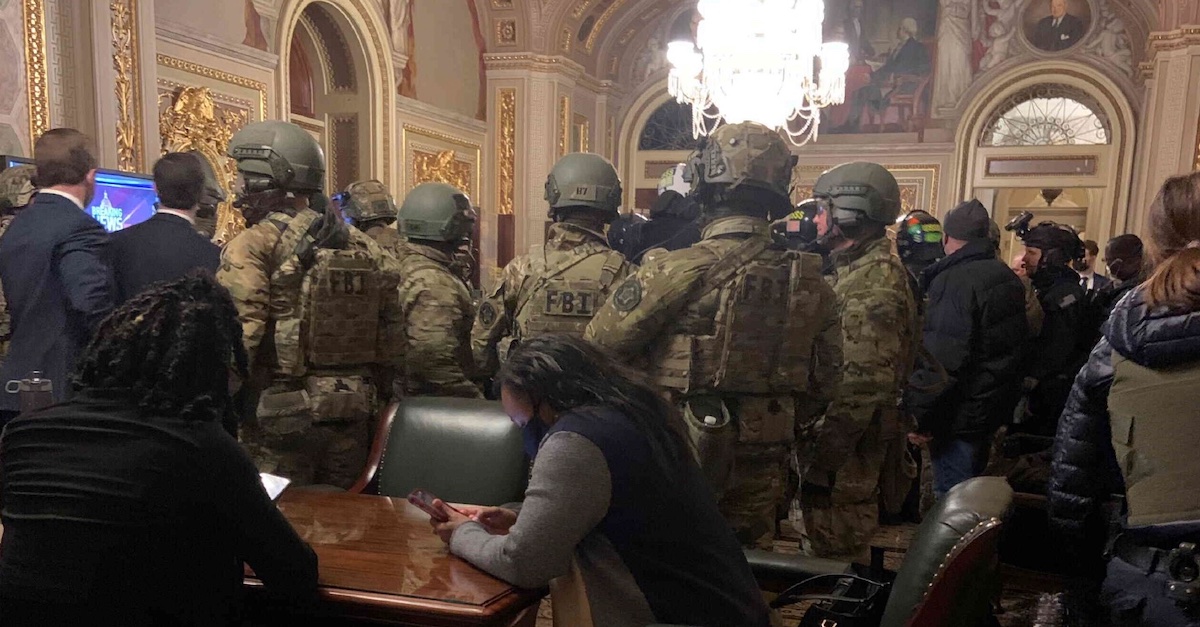 Palian said that he left the Capitol at around 11:00 p.m. that night, and, due to having worked an emergency shift, didn’t return to work until Jan. 8.

Also in Monday’s testimony, Palian said that Meggs had worn a particularly memorable accessory when he breached the Capitol on Jan. 6: a patch affixed to either a vest or a backpack that Meggs was wearing.

“I don’t believe in anything,” the patch says. “I’m just here for the violence.” 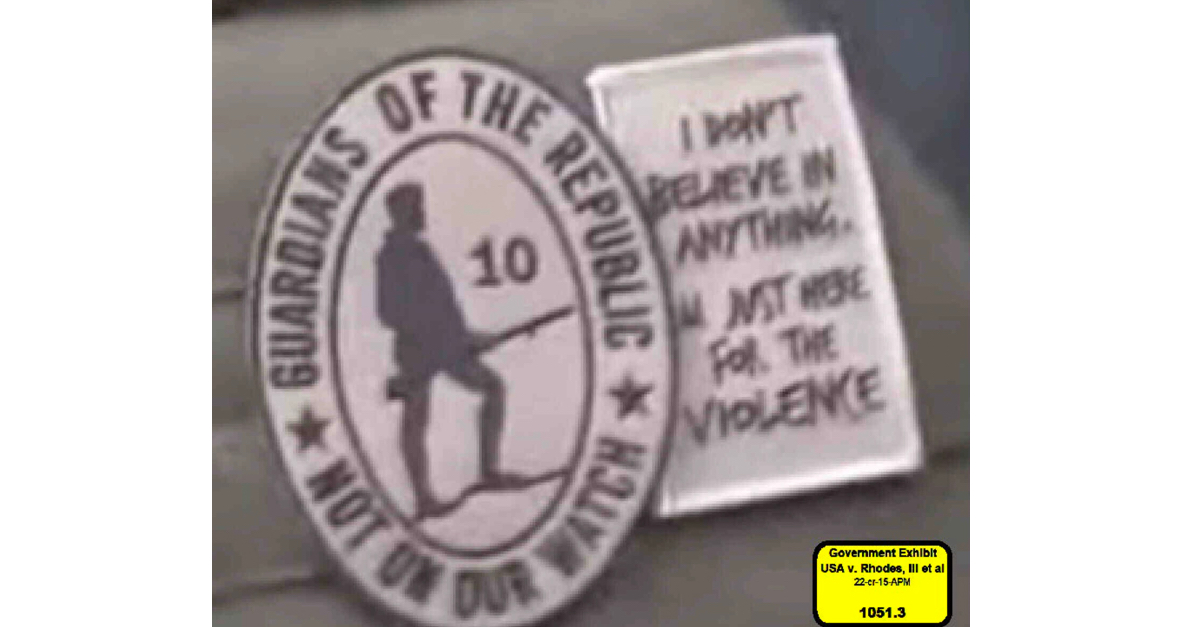 Palian said that over the course of his investigation, he has only seen that patch on Meggs.

Palian was also able to identify Rhodes outside the Capitol, seen on closed-circuit TV footage wearing a black cowboy-style hat and a black jacket.