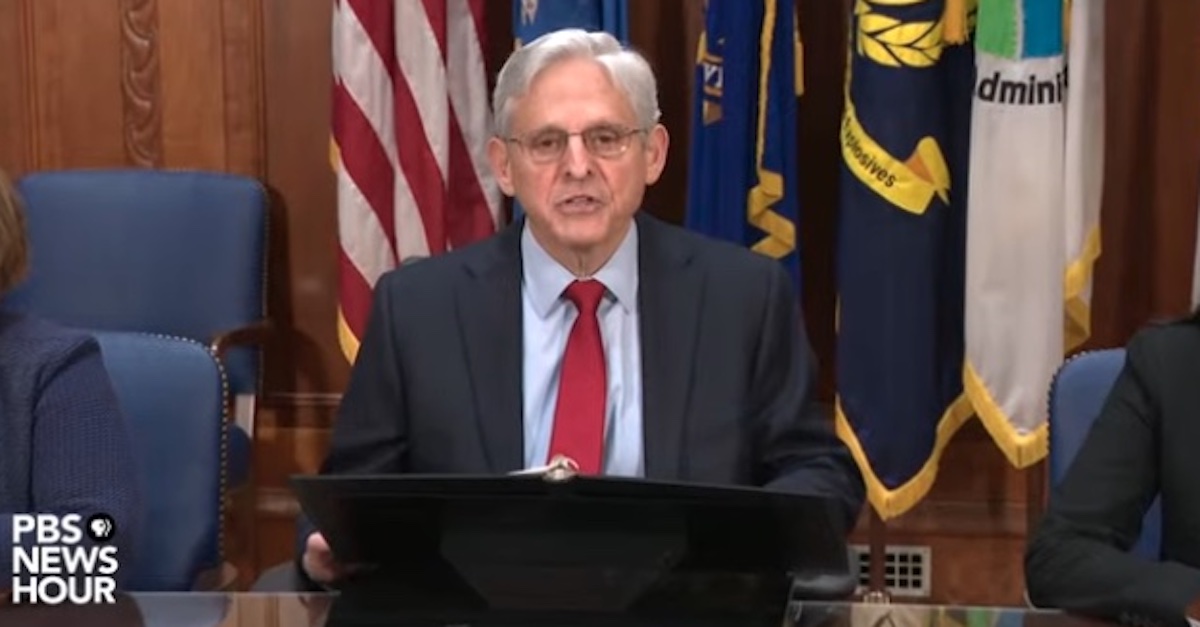 In a rare victory lap for the typically reserved lawyer, Attorney General Merrick Garland celebrated the convictions of five Oath Keepers leaders and members on serious charges, including two leaders on the seditious conspiracy charge.

“During the trial, the government’s evidence showed that almost immediately following the November 2020 election, defendant Stewart Rhodes, the founder and leader of the Oath Keepers, began planning to oppose by force the peaceful transfer of power,” Garland noted.

The press conference, convened the day after the historic verdict, marked the first time Garland directly addressed the resolution of any of the hundreds of Jan. 6-related cases on his expansive docket. He has not held any event like it after any jury trial, bench trial or guilty plea.

The Oath Keepers trial, however, marked a uniquely significant event, as the first to accuse participants in the breach of the U.S. Capitol of trying to overthrow the government or block the execution of its laws by force.

Inside the Department of Justice, U.S. Attorneys sometimes deliver remarks about convictions that take place in their districts, but former federal prosecutor Mitchell Epner told Law&Crime that this type of address to the nation is uncommon for the top official.

“In my experience, it is highly unusual for the Attorney General to personally make live comments after a verdict,” noted Epner, now a partner at the firm Rottenberg Lipman Rich PC. “I believe that there were similar statements made after the Oklahoma City Bombing verdicts against Timothy McVeigh. There may have been others, but they do not come to mind.”

Garland famously prosecuted the Oklahoma City bombing case and trumpeted that experience in his Senate confirmation hearings, drawing parallels between its lessons of white supremacist violence and the Jan. 6th attack.

Though indisputably a wholesale victory for the Justice Department, the Oath Keepers verdict also marked the first time a jury acquitted any Jan. 6th-related defendants of any crimes. Rhodes and the group’s Florida chapter leader Kelly Meggs were convicted on the seditious conspiracy count. Three others — Kenneth Harrelson, Jessica Watkins, and Thomas Caldwell — were not, but all now stand convicted of serious felonies, including obstruction of an official proceeding.

Despite the fanfare of the conference taking place, Garland remained his typically reserved — and even muted — self, ducking questions alluding to former President Donald Trump and the investigation that he transferred to the newly appointed special counsel.

Asked whether the verdict would build “momentum” toward building cases against other parties not present inside the Capitol, the attorney general demurred. “I don’t want to speculate on other investigations or the parts of other investigations,” Garland said. “This particular case is about Mr. Rhodes and the other four defendants. As you know, there’s another set of Oath Keepers, who start on Monday.”

Those Oath Keepers defendants are not charged with seditious conspiracy. An upcoming trial against Proud Boys leader Enrique Tarrio and other members of that extremist group will weigh that same top charge.

Garland also dedicated the press conference to describing the Justice Department’s agreement with respect to the water crisis in Jackson, Mississippi. The agreement calls for the appointment of an “interim third party,” as the parties negotiate a consent decree.

“I am very proud of the attorneys and investigators and staff whose unwavering commitment to the rule of law and tireless work resulted yesterday in these two significant victories for the American people,” Garland said.