R. Kelly appears in an Illinois state courtroom in a 2019 file photo. (Image via Antonio Perez/pool via Getty Images.)

Authorities announced charges Monday against a man accused of threatening three women prosecutors who worked to convict singer R. Kelly. Christopher Gunn pointed out the building where the victims worked, according to the criminal complaint.

The post was titled “Get Real Familiar,” authorities said. The prosecutors in question were only identified through the pseudonyms Jane Doe 1, Jane Doe 2, and Jane Doe 3. As federal authorities described it, Gunn “knowingly and intentionally transmitted in interstate and foreign commerce communications containing threats to injure the person of another, to wit, threats that would result in the death or seriously bodily injury” of the prosecutors.

The post featured a scene from the 1991 film Boyz N the Hood, according to officials.

The affiant described identifying Gunn as the speaker in the video:

Individual-1, whose identity is known to me and who has known the defendant CHRISTOPHER GUNN for several years, has reviewed the Video and identified the Male Voice as GUNN. In addition, I have reviewed the Video and other publicly available social media video postings made by GUNN, and GUNN’s voice, as captured in other publicly available social media video postings, closely resembles the Male Voice captured in the Video. Additionally, the Video depicts a profile photograph of GUNN and the “DeBoSki Gunn” username, which GUNN has publicly identified as his own.

Gunn also voiced plans through social media about going to Kelly’s upcoming sentencing scheduled for Wednesday, authorities said. He previously showed up to the trial on Sept. 3, 2021, the feds added.

Federal prosecutors are seeking more than 25 years in prison against Kelly for charges including racketeering and child exploitation. Authorities described the singer as a prolific abuser of women, girls, and boys.

A YouTube account named “DeBoski Gunn” does not feature a video dated Oct. 4, 2021, but it does include another post mentioned in the complaint. Dated April 15, 2022, it is titled “R Kelly Propaganda PT46 (Who is Ann Donnelly & Whats Up with Nature Boy,Cash Out).” Ann Donnelly was the presiding judge in Kelly’s Brooklyn trial.

“This was a case of aggressive maneaters having their pick at an alpha male,” the speaker said, appearing to mock Donnelly. 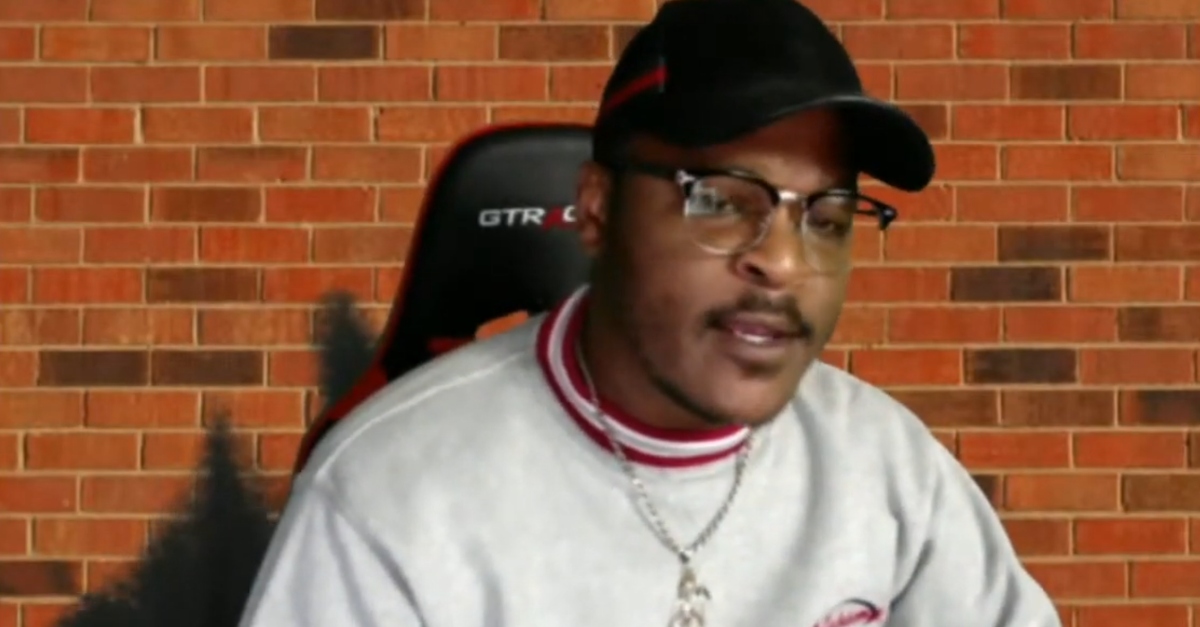 Screenshot from the video “R Kelly Propaganda PT46 (Who is Ann Donnelly & Whats Up with Nature Boy,Cash Out).”

As suggested by the numbered title, this account features of series of videos titled “R Kelly Propaganda.”

Among other allegations, Gunn also allegedly made approximately eight transactions through CashApp for more than a year, between Feb. 26, 2021 and June 1, 2022. Authorities described these as indicating he was “engaged in the sale of firearm ammunition in relation to the Kelly matter.”

Law&Crime sent an email to the address associated with the YouTube account, but authorities out of the Eastern District of New York say that Gunn, an Illinois resident, was arrested on Saturday in Chicago. An initial appearance was scheduled to take place Monday in a Chicago federal court.

[Image of R. Kelly via Antonio Perez/pool via Getty Images.]