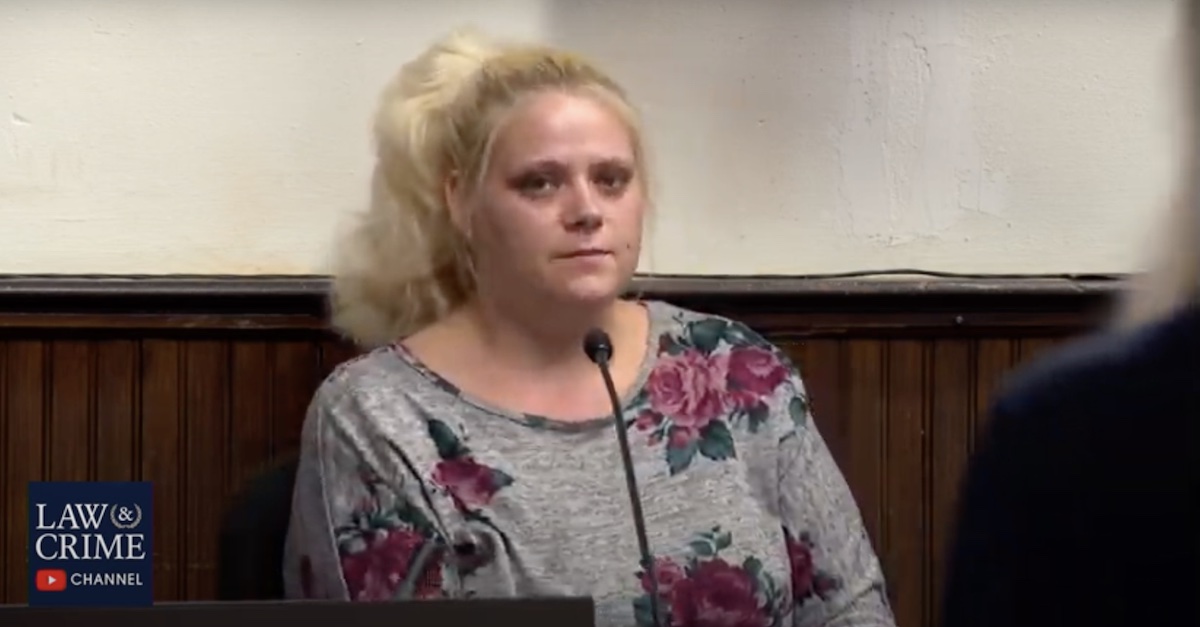 The ex-wife of George Wagner IV took the stand Monday to describe her life living with the family, including that her former mother-in-law dictated her sex life and accused her of stealing and abusing her son.

Tabitha Claytor said she first dated Wagner when she was 12 for one year. They broke up but rekindled their relationship when she was 18 after victim Hanna May Rhoden contacted her on Facebook and asked her to date Wagner again. Hanna May was dating Wagner’s younger brother, Jake Wagner. He pleaded guilty last year and admitted that he and his family murdered the eight members of the Rhoden and Gilley families so they could have sole custody of the daughter he shared with Hanna May Rhoden. His mother, Angela Wagner, has also pleaded guilty to her role in the conspiracy and agreed to testify against George and his father, Billy Wagner.

Life in the Wagner Home

Claytor testified she and Wagner married in 2012 and she had their son, Bulvine, eight months later in 2013. At the time, Claytor said she lived with George, Jake, and their parents, Billy and Angela Wagner, at a home on Bethel Hill Rd. near the sprawling Flying W horse farm owned by Billy Wagner’s parents, Bob Wagner and Fredericka Wagner. Claytor said she met the Wagners because her mother worked for Fredericka at a group home that she owned.

Claytor recalled that her mother and sister were only permitted to visit her at that home once.

After her son was born, Claytor said she wanted him to sleep with her or in his crib next to her bed. But Angela Wagner said the boy would sleep with her and Billy, the witness said.

“Angela’s house, Angela’s rules,” Claytor said when asked about who made the decisions in the home. She said George went along with his mother’s decisions.

She described an isolated existence at the Bethel Hill Rd. property where she said the Wagners planned to burn down the house to collect on an $250,000 insurance policy. She recalled helping the family move furniture, photos and other belongings out of the house so they wouldn’t be destroyed by the fire and Angela Wagner buying receipt books that they filled out to submit to the insurance company.

Claytor told the jurors that she and Angela Wagner went out one day to buy decorations to celebrate Bulvine’s first month and upon returning from the store she quoted Angela Wagner as saying “oh, I hope that’s not ours” after seeing a trail of smoke. Claytor said the Wagners started the fire using an overflowing pan of grease and a propane stove.

Claytor said the Wagners used the money to buy another home on Peterson Rd., where she lived with the Wagners and Hanna May Rhoden. The witness said she and Hanna May didn’t get along because “we were always competing for Angela’s approval.”

Claytor is scheduled to return to the stand Tuesday morning. She’s expected to testify that she escaped from the Wagner home in fear for her life and was forced to sign over custody of her son to George Wagner IV. Her testimony is important to the state’s case because prosecutors say custody of Jake Wagner and Hanna May Rhoden’s daughter was the motive for the 2016 murders.

Jeff Tackett, 46, testified Monday morning that he had known Billy Wagner since he was 13 or 14 years old and that Billy described him as a “brother from another mother.” Tackett said he also worked at the Flying W Farm breaking horses when he was laid off from union masonry jobs. He described the Wagners as “very close… like a cult.”

Tackett said he knew both Billy Wagner and victim Chris Rhoden Sr. He testified that he warned Chris Rhoden Sr. about the Wagners when his daughter, Hanna May, started dating Jake Wagner. Tackett recalled telling Rhoden “if you have trouble with them, they will harm you or kill you.”

Tackett described Fredericka Wagner as being very religious and a successful business woman. He said Fredericka often provided Percocets to Billy, who used the pain pills in the years leading up to the homicides.

Tackett recalled Billy Wagner’s sister, Robin, taking him into Wagner’s bedroom at the Flying W Farm about a week before the homicides. He said he became scared once he saw a billy club, a bullet proof vest, which he described as a “full metal jacket,” a .22 caliber hornet pistol, a vest with a gun holster and ammunition.

The witness said Billy Wagner was very angry at his sister for letting him into the room. Tackett said Wagner told him he was going to order a brass catcher and Tackett said “you’re getting ready to kill somebody. They’re dead.”

Tackett said he didn’t call authorities before the homicides because he feared Billy Wagner would harm or kill him. A week later, Tackett learned the Rhodens were murdered and he contacted authorities to let them know he believed Billy Wagner was responsible.

Tackett said, however, that he didn’t speak with agents until September 2016 — five months later — when he offered to wear a wire for BCI, which he said he did on four or five occasions. Tackett said on cross-examination he was paid $100 each time he wore the wire but when he visited Billy Wagner and his family at the Peterson Rd. property he said Billy gave him “the cold shoulder.”

Tackett also described an incident following the homicides in which Billy Wagner stopped by his home and said “I can’t stand myself” and talked about the homicides. He said Billy Wagner blamed the homicides on Skid Montgomery, one of the richest and most powerful people in the county. Tackett said Wagner claimed Montgomery had the Rhodens murdered because Chris Rhoden Sr. cut him out of an $800,000 marijuana deal. No evidence has been produced to date to show that Montgomery and Rhoden were in the drug trade together, however.

On cross-examination, Wagner’s attorneys questioned Tackett about chicken fighting that he and the Rhoden family engaged in with others. Tackett became animated when discussing the ins and outs of the chicken fights which could be very lucrative. Attorney John Patrick Parker questioned Tackett about his daily marijuana use and the fact that he purchased it from Chris Rhoden Sr.

“I can’t hardly remember anything,” Tackett said at one point.

On redirect examination, Tackett said he did not review his statements to law enforcement or listen to the interviews and testified only from his memory of the events.

Wagner IV is accused of participating in the premeditated murders of eight members of the Rhoden and Gilley families in April 2016. He has pleaded not guilty.