Michael Avenatti Grills Ex-Client Stormy Daniels in Court About Their Contract, Her Paranormal Beliefs, and Her ‘Spooky’ Doll Named Susan 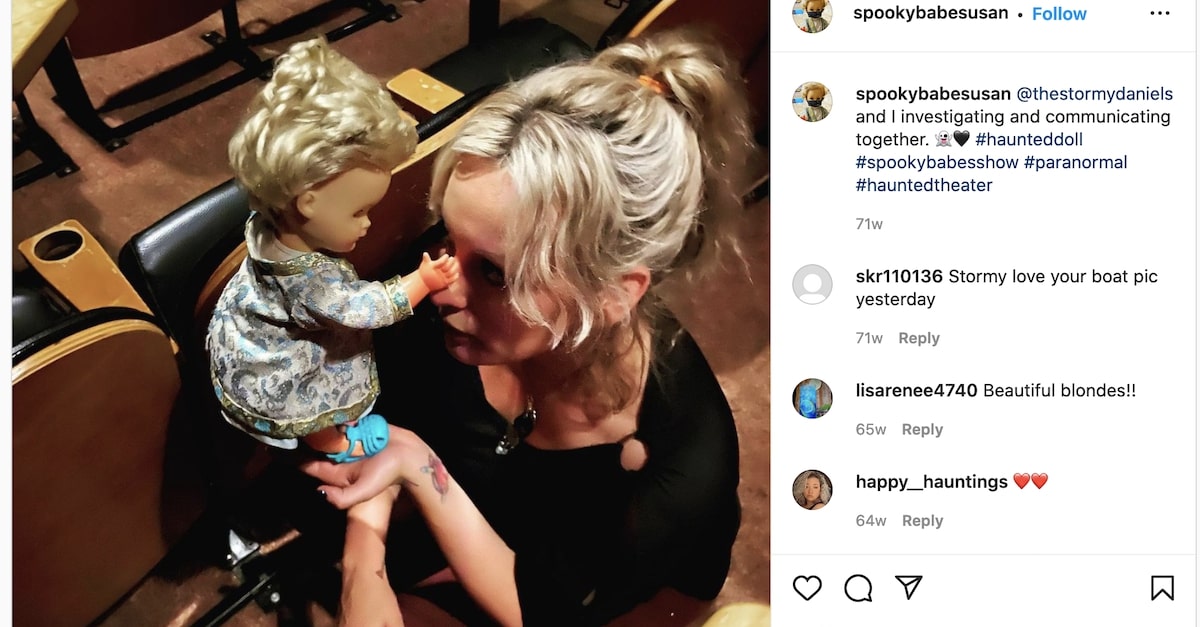 This photograph of Stormy Daniels and the paranormal doll Susan comes from the Instagram page “SpookyBabeSusan,” a reference to a repeating character of the adult film actress’s TV show.

Grilling the former client who earned him national acclaim and a federal indictment, pro se criminal defendant Michael Avenatti tried to discredit adult film actress Stormy Daniels on Friday by questioning her about her paranormal beliefs.

Prosecutors say that Avenatti stole almost $300,000 of her $800,000 advance of Daniels’s book “Full Disclosure,” about her life and litigation with former President Donald Trump about their alleged affair.

Cross-examination quickly turned surreal as Avenatti asked his former client about her speaking to the dead, experiencing bloody visions, and her interactions with a doll named Susan, who—Daniels made a point to note in open court—has her own Instagram page.

“You Talk to the House, Right?”

Representing himself, Avenatti started questioning Daniels during the last 10 minutes of her first day on the witness stand on Thursday. Daniels told a jury her former lawyer “stole from me and lied to me.” She also recited from months of her text messages with Avenatti trying to recover book advances.

Before trial even began, Avenatti signaled that he would try to attack her credibility on cross-examination by speaking about her never-aired TV series “Spooky Babes.” The disgraced lawyer, who was previously convicted of conspiring to extort Nike, acidly called it an “alleged television show,” before the government successfully objected to the phrasing.

“There has never been a single episode that has actually aired on television, am I correct about that?” Avenatti asked.

Avenatti rattled some of the paranormal experiences that are the subject of the show, including visions of a sobbing woman who cut her wrists and an anthropomorphized house Daniels refers to as “she.”

“You talk to the house, right?” Avenatti pressed.

Testifying about experiencing health scares that she connected to the house’s sinister characteristics, Daniels said that she had Reiki scans performed on her.

A seemingly confused U.S. District Judge Jesse Fruman, presiding over the trial, asked what that means and had Daniels spell it.

Avenatti quoted Daniels as having said “I should keep my mouth shut because me going around saying ‘I see dead people'” because that could negatively effect her pending court cases.

Stormy Daniels and attorney Michael Avenatti are seen at The Abbey on May 23, 2018 in West Hollywood, California. (Photo by Tara Ziemba/Getty Images)

Daniels agreed that she said that.

Indeed, Avenatti frequently tried to turn those beliefs against her.

“How do you speak with the dead?” he asked.

“I don’t know,” she said. “It just happens sometimes.”

“And do the dead speak back to you?” he asked. “Do they communicate with you?”

Daniels testified that a paranormal doll named Susan from “Spooky Babes” also had this power of communication.

“According to you, Susan walks,” Avenatti asked.

“I’ve never seen her walk,” Daniels hedged, before adding that she’s seen the doll in a different spot without knowing how she got there.

“You heard her call you ‘Mommy, mommy’?” Avenatti asked.

“You believe that you’re a medium, correct?” he asked.

Beyond “Spooky Babes,” Avenatti culled from his former client’s appearance on the podcast of ex-Trump fixer Michael Cohen to defend himself. Cohen was prosecuted for campaign finance violations for hush-money payments to Daniels and ex-Playboy model Karen McDougal to silence them from talking about their alleged affairs with Trump before the 2016 presidential election.

Avenatti suggested that Daniels admitted on Cohen’s podcast to getting some book advance payments.

Daniels acknowledged that she told Cohen: “I did get my first couple of checks.”

When Avenatti did not try to attack her credibility, he grilled her on the fine print of their contract, which included that he would be “entitled to a reasonable percentage to be agreed upon” between the two of them.

Another zinger during her cross-examination lent context to that remark. When Avenatti asked her whether she told the New York Times that watching him work was like seeing the Sistine Chapel being painted, Daniels one-lined: “That’s what you told me to say.”

During opening statements, Avenatti’s ex-defense attorney insisted that his client’s spat with Daniels was nothing more than a “fee dispute” that has been criminalized. Avenatti decided to represent himself shortly after, citing what he called a “breakdown” in his defense team. That decision sparked a rare and dramatic match-up between an attorney and his former client.

On Thursday, Avenatti anticipated his grilling would last six hours. It clocked out a little north of four hours by the end of the day. Immediately after her testimony concluded, U.S. District Judge Jesse Furman unsealed a subpoena Avenatti’s defense team filed late last year seeking her medical records. Those filings showed that Avenatti’s defense tried to tar her by raising questions about her mental health.