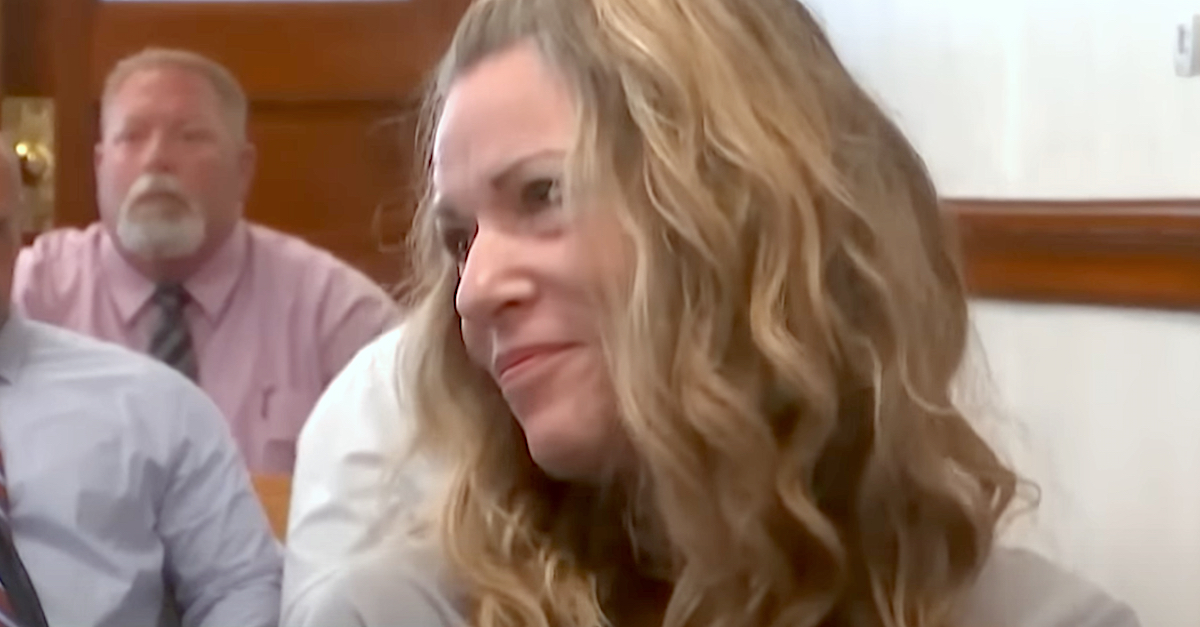 Lori Vallow Daybell smiled in court several times during an Aug. 16, 2022 pretrial hearing. (Image via screengrab from the Law&Crime Channel.)

An Idaho judge has agreed to suspend murder proceedings against Lori Vallow Daybell and to vacate a scheduled trial date. The apparently indefinite pause is necessary, a judge wrote, because of renewed questions about Vallow Daybell’s mental competency to stand trial.

The so-called “doomsday cult” mom is charged with first-degree murder and conspiracy to commit first-degree murder in the deaths of her children Tylee Ryan, 16, and JJ Vallow, 7. She also faces murder charges connected to the death of Tammy Daybell, the former wife of Chad Daybell. Chad is Lori’s current husband; he is also charged in connection with the deaths.

Vallow’s attorneys on Oct. 3 filed a brief motion to request that the case be put on hiatus.

“Trial is currently set to being on January 9, 2023,” the defense wrote. “A final pretrial conference is set for November 9, 2022. The time limit to file written notice of our intention to raise any issue of mental condition under Idaho Code Title 18 is 9O days before trial, or October 11, 2022.”

The entirety of a subsequent paragraph and part of a proceeding paragraph are blacked out in the public file.

Idaho District Judge Steven W. Boyce agreed to redact the defense filing on Oct. 3 — the same day it was filed — “in order to adhere to protecting information expressly exempt from disclosure under I.C.A.R. 32(g)(10).”

Pursuant to I.C.A.R. 32 the Court finds that the motion makes reference to information expressly exempt from public disclosure. See I.C.A.R. 32(g)(10). Accordingly, the MOTION TO CONTINUE TRIAL, TO TOLL TIME LIMITS, AND TO STAY CASE is redacted and such redaction filed for public inspection in conformity with I.C.A.R. 32. The Court determines such redaction is necessary in order to preserve the Parties’ rights to a fair trial and is no broader than necessary to protect this fundamental right under I.C.A.R 32(i)(2)(E).

On Oct. 5, the Idaho Department of Health and Welfare said it wished to wash its hands of the proceeding:

On Oct. 6, prosecutors filed a response to Vallow Daybell’s request to pause the proceedings. Unlike the defense filing, which contained redactions, the state filed its motion completely under seal:

(1) The information contained in the document is exempt from disclosure pursuant to I.C.A.R.(g)(10);

(3) Sealing said documents is the least restrictive measure consistent with the privacy
interests at issue.

(4) Sealing these documents during the pendency of this criminal investigation is in
the best interest of justice and will preserve the right to a fair trial.

The judge agreed the same day — Oct. 6 — to seal the material. He also ordered that the case be paused on Oct. 6.

“Fremont County Case No. CR22-21-1624, is hereby suspended until a determination of Mrs. Daybell’s competency to stand trial can be determined,” the judge wrote.  “[A]s a result of a need to determine the Mrs. Daybell’s competency, it is impractical for all Parties to adhere to the Court’s May 26, 2022 Scheduling Order. Accordingly, the Court sees no other alternative at this time than to vacate the January 9, 2023 trial for case CR22-21-1624.”

Finally, the judge rationed that a further delay would not violate Vallow Daybell’s right to a speedy trial under the Constitution.

Other filings and hearings in the case have also been sealed or handled in private, and Judge Boyce recently agreed to shut down television coverage of both future hearings and of the trial itself. Boyce chastised the press’s “inordinate focus on the Defendant” during an Aug. 16, hearing. What Boyce didn’t mention is that Vallow Daybell incessantly looked into and smiled at the camera during the hearing. He did, however, note that none of the press coverage violated any rules. Rather, he banned future television coverage because he said it might result in a biased jury venire.

Vallow Daybell’s competency to stand trial was in question during earlier proceedings; however, she was treated and was adjudicated competent to face the charges against her as of April 2022.  Apparently, according to the foregoing, that assessment has again changed.

Given the judge’s ban on cameras in court, the state filed one additional opposition to Vallow Daybell’s request to appear in court without wearing prison garb:

Co-Defendant Vallow Daybell filed a motion to appear in street clothes on September 9, 2022. At that time the State entered no objection to the request given the fact the proceedings, or at least portions of them, were being recorded and broadcast. The State was concerned about the potential for jury contamination based on the media presence surrounding the Defendants’ case(s). However, since the State filed an initial response in case CR22-21-1624, this Court has entered an order restricting cameras in the courtroom. Given the new posture of these proceedings in relation to the media’s access to images of the Defendants, the State’s concern regarding jury contamination has been dispelled, and the State would request absent a finding to deviate from the standard procedures, the Defendants no longer be allowed to appear in street clothes.

The various documents referenced in this report are embedded below: