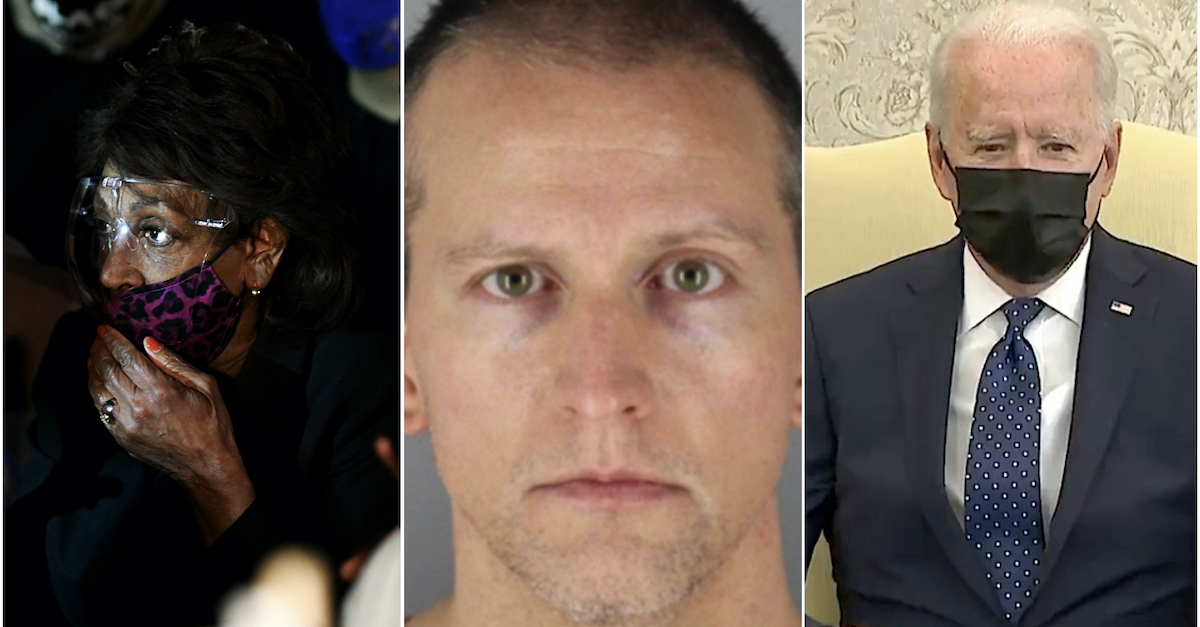 Just before the start of jury deliberations, Rep. Maxine Waters (D-Calif.) angered the judge presiding over Minneapolis police officer Derek Chauvin’s trial by commenting that protesters should get more “confrontational” in the event of an acquittal. Then the next day, President Joe Biden declared evidence of Chauvin’s guilt was “overwhelming.”

Though legal experts agree that politicians should keep out of the national conversation about a criminal trial, those comments are widely considered unlikely to spark a successful appeal of Chauvin’s murder and manslaughter convictions.

“If you’re relying on that for your appeal, that is not a hopeful situation,” defense attorney Ken White, a legal analyst better known by his nom de plume “Popehat,” told Law&Crime in a phone interview.

“I don’t think it’ll be a successful issue on appeal for the reasons that the judge ended up saying, which is he doesn’t think that it prejudiced the jury,” Rodgers told Law&Crime. “It’s been instructed all along not to read any news at all during this period of time. And, legally, juries are assumed to comply with their instructions in that regard.”

The Democratic president and the congresswoman’s comments have been criticized across the political spectrum, but U.S. politicians weighing in on high-profile court proceedings is a longtime and bipartisan tradition. President Donald Trump regularly blared out his opinions on active criminal cases, including angling for the execution of the then-newly charged suspect in what had been called New York’s worst terror attacks since 9/11.

Trump’s comments sparked a public defender’s unsuccessful motion to take the off the table for Sayfullo Saipov, who is charged with mowing down pedestrians and cyclists along the West Side Highway for the Islamic State group. The 45th president also repeatedly sounded off the court-martial of former Navy SEAL Edward “Eddie” Gallagher.

Biden’s decidedly more modest remarks opined: “The evidence is overwhelming,” without saying outright whether he believe it tilted toward guilt or innocence, even if the context left little doubt on that question.

But legal experts warn that even toned down remarks, coming from the weight and force of the U.S. presidency, have the capacity to taint a jury—or at least, convey disrespect toward a co-equal branch of government.

“I do think that it’s problematical when someone like Joe Biden, who is perceived, rightly or wrongly as mild-mannered when he makes a comment like this, I think it weighs more,” White noted. “Because people tend to discount what Trump said as, ‘That’s just Trump being Trump.’ But if Biden weighs in on something like this, when he’s genuinely considerably more mild-mannered, then that’s a different story.”

For White, the fact that Biden hastened to add “I wouldn’t say that unless the jury was sequestered” did not cure matters.

“The fact that the jury is sequestered mitigates it somewhat, but I think that’s like a judge saying, ‘The jury will disregard that last testimony,'” White noted. “You don’t really unring a bell.”

Trump’s former legal adviser Jenna Ellis, who was previously mum on more strident pre-trial comments by her former boss, joined the chorus of outrage against Biden: “RIP due process,” she tweeted.

While the political right might be sensing opportunity, legal experts note ill-advised political commentary on the courts is an age-old practice that rarely paves the way for successful appeals. Hennepin County Judge Peter Cahill, who is presiding over the case, unloaded on Waters’s remarks as “abhorrent” to the separation of powers.

“I wish elected officials would stop talking about this case, especially in a manner that is disrespectful to the rule of law and to the judicial branch and our function,” Cahill said on Monday, before Biden arguably dashed that hope again.

That sentiment resonated with Rodgers, who spent more than a decade serving the U.S. Attorney’s Office for the Southern District of New York.

“So the suggestion there is, ‘Listen, we’re the judicial branch. We’re doing our business here. We know how to do it. You stay out of it. Don’t comment on our proceedings in a way that could impact them,'” Rodgers said. “And so it seemed to me that the thrust of his anger was really about that issue, and not so much about the prospect that it actually would get to the jurors and caused a problem with the sanctity of the deliberations.”