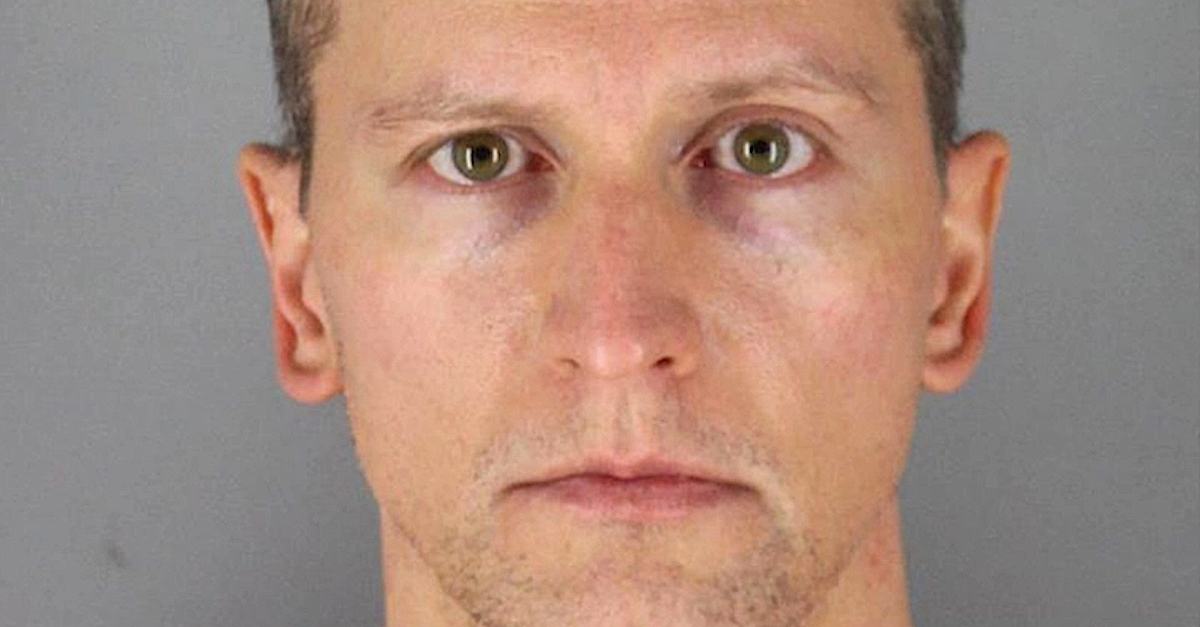 Former Minneapolis police officer and convicted murderer Derek Chauvin on Wednesday filed court papers in search of a lighter sentence in the killing of George Floyd, Jr. Chauvin’s proposed sentence is to walk out of jail later this month on time served and to face the rest of his punishment on “stringent” terms of probation. Among his proffered reasons for the softer sentence: he’s the “product of a ‘broken’ system” and can still remain an “an asset to the community.”

Prosecutors on Wednesday countered that Chauvin should be sentenced to 30 years behind bars.

Chauvin’s latest arguments come after Judge Peter Cahill ruled that Chauvin is eligible for a tougher-than-usual sentence. Cahill said Floyd was “terrified by the knowledge that he was likely to die” and that Chauvin remained “indifferent” and “abused a position of trust and authority” as a police officer. Cahill also ruled that Chauvin “treated George Floyd with particular cruelty” while “[c]hildren were present” and that Chauvin “committed [his] crime . . . with the active participation of at least three other persons.” All of those factors, Cahill ruled, left Chauvin eligible for an “upward sentencing departure” — above what the courts would normally dole out for a defendant convicted of second-degree murder yet who had no prior criminal history.

Minnesota’s second-degree murder statute authorizes a sentence for Chauvin of up to 40 years, but a state sentencing grid recommends 150 months (12.5 years) for a man with Chauvin’s past.

Despite Cahill’s ruling, the defense is once again pressing for a softer punishment.

“The Defense . . . urges this Court to . . . impose a probationary sentence, limiting [Chauvin’s] incarceration to time served, or in the alternative, a downward durational departure,” the motion boldly asks.

“A presentencing investigation (PSI) was completed, and the officer who conducted the PSI concluded that Mr. Chauvin’s criminal history score is zero,” the motion continues.  “Mr. Chauvin asks the Court to look beyond its findings, to his background, his lack of criminal history, his amenability to probation, to the unusual facts of this case, and to his being a product of a ‘broken’ system. Mr. Chauvin respectfully requests that this Court grant his motion for a mitigated dispositional departure or, in the alternative, a downward durational departure.”

Nelson noted that although Chauvin was convicted of three crimes (second-degree “unintentional” murder, third-degree “depraved mind” murder, and second-degree, culpably negligent manslaughter), the possible sentences for those crimes collapse into but one sentencing calculation on the most severe count.

Nelson recapped Chauvin’s life story in a light most favorable to his client:

Mr. Chauvin was born in 1976 to a loving mother, father, and sister. He grew up near the Twin Cities and completed high school in a local suburb. Although Mr. Chauvin at a young age struggled to find passion for a particular career, he eventually decided to become a police officer. After years of work, Mr. Chauvin obtained his Bachelor of Science in Law Enforcement in 2006, while working as a Minneapolis police officer. Mr. Chauvin had a stable job, having worked full-time for the Minneapolis Police Department for nineteen (19) years.

Mr. Chauvin is forty-five (45) years old now as he stands before the Court. At the time of the offense conduct, he was forty-four (44) years old, living with his wife. Mr. Chauvin’s age weighs in his favor when determining a sentence. The life expectancy of police officers is generally shorter, and police officers have a significantly higher average probability of death from specific diseases than did males in the general population. Mr. Chauvin is now forty-four years old and is nearing the healthier years of his life. He has been preliminarily diagnosed with heart damage and may likely die at a younger age like many ex-law enforcement officers.

The motion continues by complaining that prison would result in “long-term damage” and that Chauvin would likely “becom[e] a target in prison.”

“Such safety concerns are evident by his presentence solitary confinement in a high-security prison,” Nelson wrote. “Mr. Chauvin is not the average offender. Prior to this incident, Mr. Chauvin led a hard-working, law abiding life, and has experienced no legal issues until the point of his arrest. Mr. Chauvin still has the ability to positively impact his family and his community.”

The motion reiterates that Chauvin was “completely cooperative with the Court” and “turned himself into custody upon learning that a complaint and warrant had been issued in his case.”

Nelson next wrote that “probation is appropriate for Mr. Chauvin” because he “has the support network he needs to succeed as he moves past this incident.” From the motion at length:

In the eyes of the public, Mr. Chauvin has been reduced to this incident, and he has been painted as a dangerous man. Despite serving his community as a police officer for nineteen (19) years, receiving consistently high scores on his annual reviews, and being well-regarded by his supervisors and peers. Mr. Chauvin has received various honors and commendations for his work in the Minneapolis Police Department, including two medals of valor, two medals of commendation, and various lifesaving awards. However, behind the politics, Mr. Chauvin is still a human being. Before this incident occurred, Mr. Chauvin was an average man with a loving family and close friends. He was a husband, stepfather, uncle, brother, and son. To this day, Mr. Chauvin has a close relationship with his family and friends, and he benefits tremendously from their support. He has the support of his mother, stepfather, father, stepmother, and sister. Additionally, although they divorced in early 2021, Mr. Chauvin is still supported by his ex-wife, her family, and his former stepchildren. Mr. Chauvin has also received thousands of letters of support since his arrest in 2020 from local and international communities.

“In spite of his mistakes, Mr. Chauvin has demonstrated that he has a capacity for good and that he has the discipline to consistently work toward worthwhile goals,” the motion reads. “Not only has Mr. Chauvin demonstrated that he can maintain the discipline required to succeed with probation, he has also proven he can be an asset to the community if allowed to remain in it. This is the history of a man who is particularly amenable to treatment and should be granted a mitigated dispositional departure.”

Nelson then argued that prison time should be minimal if probation was not the appropriate sentence.

“Here, Mr. Chauvin was unaware that he was even committing a crime,” the motion states. “In fact, in his mind, he was simply performing his lawful duty in assisting other officers in the arrest of George Floyd.”

Mr. Chauvin’s is not a typical case in which a person is commits an assault that results in the death of another. As is clear from Mr. Chauvin’s actions, had he believed he was committing a crime, as licensed police officer, Mr. Chauvin simply would not have done so. Mr. Chauvin’s offense is best described as an error made in good faith reliance his own experience as a police officer and the training he had received—not intentional commission of an illegal act.

“Mr. Chauvin did not intend to cause George Floyd’s death,” the motion says while wrapping up its relevant arguments as to a downward departure.

He believed he was doing his job. The facts of Mr. Chauvin’s case certainly cannot place his offense among the most egregious of all unintentional murder cases such that no mitigated departure is warranted. Given the facts of this case, if the Court declines to depart downward with respect to disposition, a downward durational departure is certainly justified.

Nelson then attempted to re-litigate some of the issues surrounding the upward sentencing departure which Judge Cahill already granted.

Prosecutors argued Wednesday through their own sentencing memorandum that Chauvin should be given no benefit of the doubt and should receive no leniency whatsoever because of the “profound impact” of Chauvin’s “conduct on the victim, the victim’s family, and the community”:

Defendant brutally murdered Mr. Floyd, abusing the authority conferred by his badge. His actions traumatized Mr. Floyd’s family, the bystanders who watched Mr. Floyd die, and the community. And his conduct shocked the Nation’s conscience. No sentence can undo the damage Defendant’s actions have inflicted. But the sentence the Court imposes must hold Defendant fully accountable for his reprehensible conduct.

In short, the Court should order a sentence that is twice the upper end of the presumptive sentencing range. The presumptive sentencing range for Defendant’s conviction on the second- degree unintentional murder conviction is 128 to 180 months. The State therefore respectfully requests that the Court sentence Defendant to 360 months, or 30 years, in prison.

The state’s memorandum leaned heavily on the court’s previous finding that an upward sentencing departure is legally appropriate.

Read the entire seventeen-page motion below: