Ethan Crumbley's Parents Want Him to Testify at Their Trial 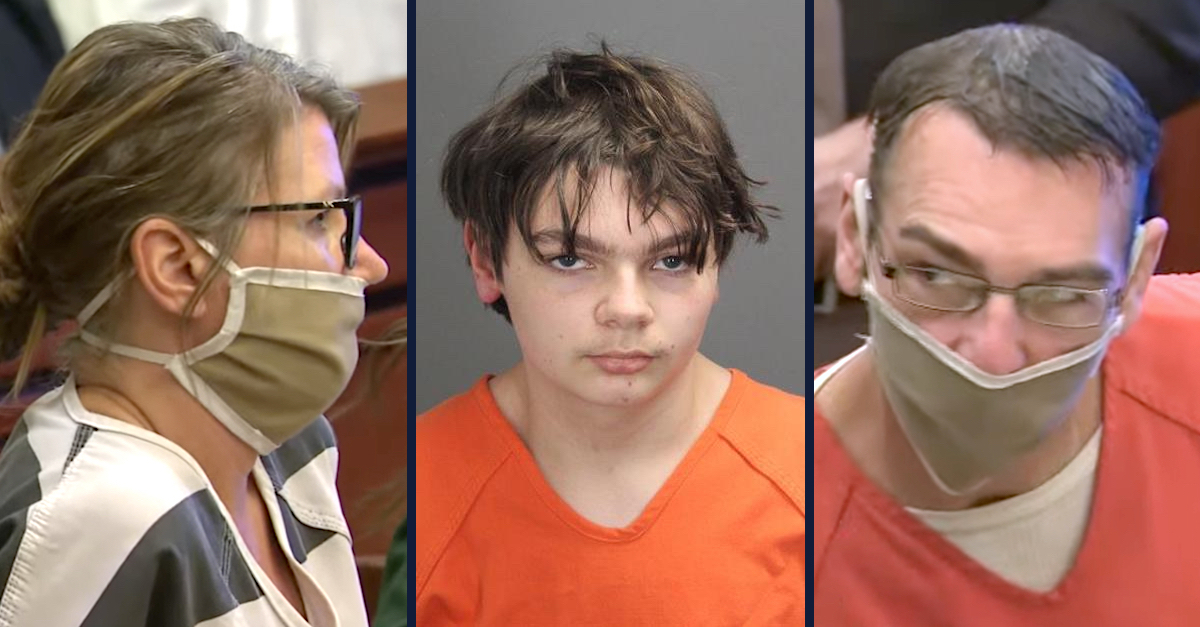 Jennifer Crumbley, Ethan Crumbley, and James Crumbley. (Image of Jennifer and James via WJBK-TV/YouTube; image of Ethan via mugshot.)

Attorneys for the parents of Ethan Crumbley on Monday said they wish to call the alleged Oxford, Michigan high school mass murderer to testify at their upcoming involuntary manslaughter trial.

“We’re going to call him,” attorney Shannon Smith said in court, according to multiple local and national news reports. “We need him to testify to information not related to his actual shootings, but related to extraneous matters that are important in the case.”

Oakland County Prosecutor Karen McDonald scoffed at the suggestion that the parents could “somehow highlight [Ethan’s] role” in the events that led up the shooting to somehow help their own case.

In an exchange described as “heated” in local news reports, Smith countered yet again.

“This is not about the defendants wanting to throw their son under the bus, or making him look bad,” Smith added. “This is about our clients defending the case.”

“When the prosecution criticizes the defense of being selfish, we are going to be selfish all day,” she continued. “Selfishly, we have to protect their rights.”

Crumbley’s parents are represented by Smith and Mariell Lehman. Both of those attorneys practice law at the same law firm. Though the parents have waived conflict of interest rules which generally forbid attorneys from the same firm from representing different defendants in the same criminal prosecution, a judge ordered separate counsel to join the case to avoid the possibility of an ethics issue at some point down the road.

Smith predicted that Ethan would almost surely raise Fifth Amendment defenses if called to the stand.

“He can answer questions that are not covered by the Fifth Amendment,” Smith said in court. “So, we can call him as a witness. And I was just thinking that if his trial is scheduled after, I suppose he’ll still plead the fifth.”

Oakland County Circuit Judge Cheryl Matthews reportedly responded to some of the back-and-forth by noting that Crumbley would not be able to “invoke his Fifth Amendment right against self-incrimination in front of the jury,” according to a retelling of the hearing by the Detroit Free Press.

Smith seemed undeterred and reiterated that the questioning would involve the aforementioned “extraneous matters.”

Smith expressed some trepidations about the parents being tried before the son.

Also on Monday, Judge Matthews refused a defense request to move the case out of Oakland County. She further ruled that Ethan Crumbley’s “internet search history, his mother’s alleged affair, the parents’ drug and alcohol use, and disturbing Instagram posts that Ethan is accused of making before the shooting” would not be able to be used at trial, according to FOX News. The Detroit Free Press reported that the discovery of “a Nazi coin” in Ethan’s bedroom and a “bird’s head” that Ethan “allegedly hid under his bed in a jar” would not be admissible at the parents’ trial. The rationale, according to the defense, was that the items would be “irrelevant and prejudicial,” according to the newspaper’s retelling of the hearing.

The full hearing is below: