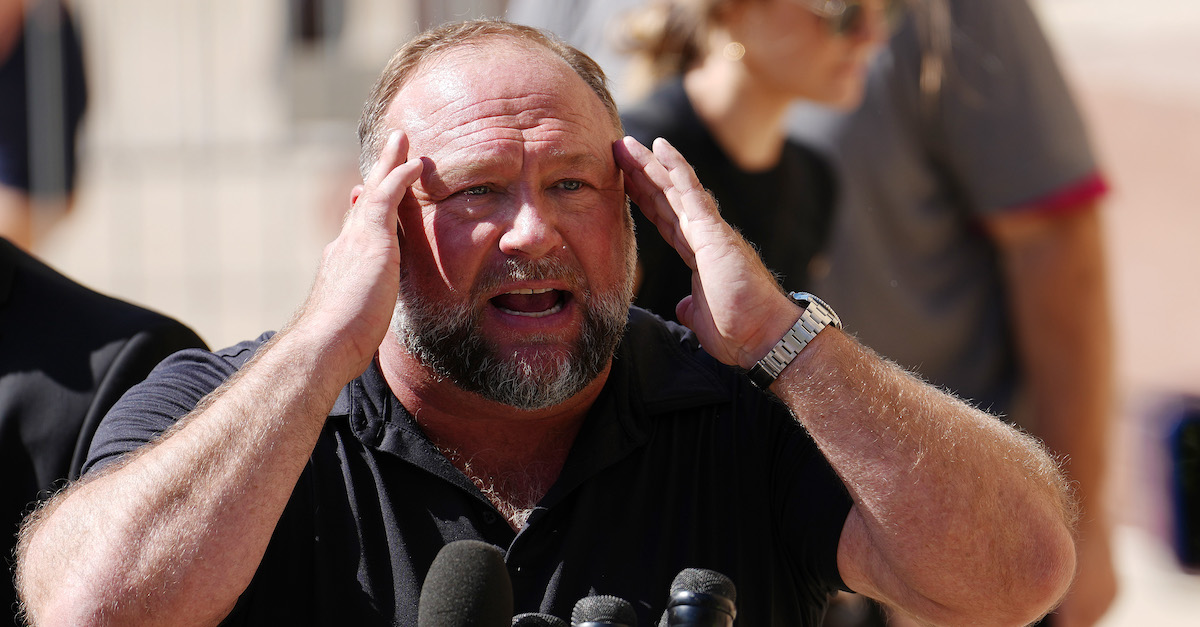 Alex Jones speaks to the media outside Waterbury Superior Court during his trial on September 21, 2022 in Waterbury, Connecticut. (Photo by Joe Buglewicz/Getty Images.)

A collection of plaintiffs connected to the 2012 Sandy Hook, Connecticut school shooting is pushing forward with claims for punitive damages against Infowars host Alex Jones. The damages, if awarded, would be in addition to a nearly $1 billion verdict already rendered in Connecticut alone against Jones and several of his associated companies.

A strongly worded reply filed Friday by the plaintiffs lambastes Jones’ conduct for the last decade and says his arguments against punitive damages are simply wrong on the law:

The defendants do not engage at all with the Supreme Court case law governing the award of punitive damages under CUTPA, other than to misstate the law by arguing that the plaintiffs had the burden of producing evidence of the defendants’ finances. Instead, they simply assert – without citing a single exhibit, a single instance of testimony, or a single case in support – that the jury’s fair, just, and reasonable award of compensatory damages is in some way punitive in nature. The defendants provide no basis for the Court to do anything other than award the historically significant CUTPA punitive damages that their reprehensible conduct requires.

CUTPA is the Connecticut Unfair Trade Practices Act, and the plaintiffs say it gives them a right to seek punitive damages against Jones.

In earlier filings, Jones claimed that the plaintiffs were after “an award reaching potentially into the multiple trillion dollar range.” The plaintiffs wrote in reply that they sought no specific dollar amount:

The plaintiffs did not request a trillion dollars in punitive damages, let alone an award in the “multiple trillion dollar range.” The plaintiffs advised the Court that “CUTPA punitive damages are typically assessed as a multiple of compensatory damages,” argued “that approach is surely appropriate here,” and stated that the Court should “craft an award that is tailored to the facts of this particular case.”

The plaintiffs did not say that the Court should award $2.75 trillion in CUTPA punitives, and the defendants know that.

Litigation against Jones by various Sandy Hook-connected families has played out in both Texas and Connecticut.  The lawsuits challenged Jones’ claims that the massacre, which left 26 people dead, was a “hoax.”  The Texas case resulted in a verdict of $49.3 million, though most of that amount will likely be reduced due to a punitive damages cap in the Lone Star State. The Connecticut case added an additional $965 million to the liability totals faced by Jones and his companies — so far. Punitive damages and attorneys’ fees remain outstanding issues in the Connecticut case.

Jones argued in previous motions that the judge should construe the jury’s verdict as a form of punitive damages due to its weighty total.

The plaintiffs rebuffed that suggestion on Friday.

The plaintiffs said the defendants — Jones, et al. — were “[i]gnoring the record” by suggesting that the damages already awarded by the Connecticut jury were a form a punitive damages.

Plus, the plaintiffs asserted, Jones and his companies got exactly what they asked for.

The plaintiffs also said Jones’ attorneys provided “no legal or record support” for the assertion that the plaintiffs used life expectancy tables as part of a ploy to “encourage the jury to award a sum that would deter Mr. Jones from speaking.”

The defendants presume that this damages award is “substantial” and “unprecedented” – but that conclusion can only be drawn after considering the nature of the harm suffered by the plaintiffs, a consideration the defendants completely ignore. Given the largely undisputed evidence of the degree of harm these vulnerable families suffered over a ten-year period, the jury may reasonably have concluded that its compensatory damages assessments were modest, and so may the Court.

The plaintiffs also complained that Jones failed to meet his legal burden to provide evidence of his financial resources and skewered Jones for “mocking” the verdict on an Infowars broadcast as it was being read in court.

Accordingly, due to the “the degree of reprehensibility of the defendants’ conduct,” the plaintiffs said a punitive damages award is “appropriate and just.”

“In short, the defendants identify no factor that militates against awarding substantial CUTPA punitives, and the arguments they do propose have been explicitly rejected by the Supreme Court,” the document asserts near its conclusion.