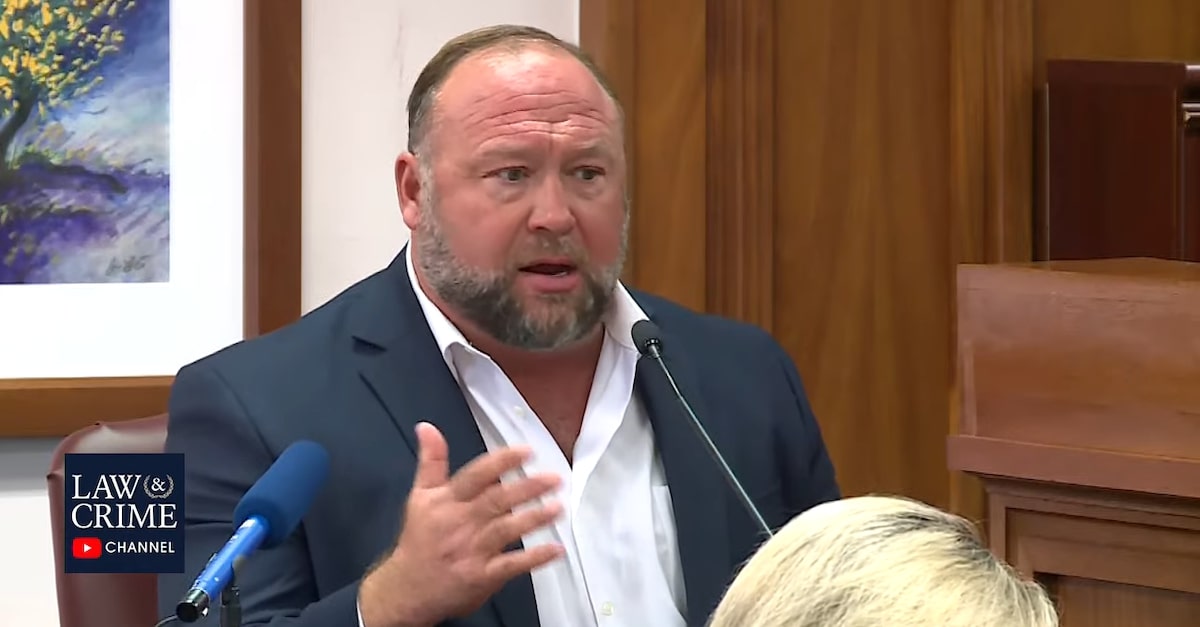 After the bombshell revelations that Alex Jones’s legal team inadvertently disclosed years of his phone data, an attorney for a Sandy Hook victim’s parents disclosed that “various” law enforcement agents want to scrutinize the information.

Attorney Mark Bankston let Jones — and the rest of the world — know about his lawyer’s accidental disclosure of 2.3 gigabytes of cell phone data in the middle during cross-examination on Wednesday, apparently stunning the Infowars founder. Jones scoffed that it was Bankston’s “Perry Mason moment,” and Bankston suggested that the contents showed that Jones lied under oath.

On Thursday, Jones’s lawyer Andino Reynal tried to mitigate the fallout by asking Travis County Judge Maya Guerra Gamble to order the wholesale deletion of the data and declare a mistrial.

Bankston argued that Jones’s legal team effectively waived any privilege to the information by failing to assert it within 10 days.

“Mr. Reynal is right now using a fig leaf of this motion they say I violated to put a fig leaf over his own malpractice over his own absolute breach of his duties to his own client,” Bankston said.

The data, the lawyer continued, is not privileged — and is coveted by “various” federal agencies.

“I am under requests from various federal agencies and law enforcement to provide [Alex Jones’s data] absent a ruling from you saying ‘You cannot do that, Mr. Bankston,’ I intend to do so immediately following this hearing,” Bankston said.

The lawyer named one of those government entities as the Jan. 6 Commission.

“Things like Mr. Jones and his intimate messages with Roger Stone are not confidential,” Bankston said, referring to former President Donald Trump’s oft-described fixer. “They are not trade secrets, none of them.”

In one of their public hearings, the Jan. 6 Committee focused sharply on Stone’s ties to extremist groups like the Proud Boys and the Oath Keepers, both of which apparently had encrypted chat rooms labeled “Friends of Stone.”

Judge Gamble denied the mistrial motion and indicated that Jones’s legal team likely would not be able to stuff the proverbial toothpaste wholly back into the tube.

“I’m not going to seal the quantity of information without knowing what’s in it,” she said.

“We can have a little bit of time while we’re waiting to research whether there’s some reason I should not allow Mr. Bankston to make those two disclosures,” she added, referring to the Jan. 6 Committee and plaintiffs’ lawyers from the Connecticut litigation.

Gamble did not specify the amount of time, but the jury is currently deliberating to determine how much Jones must pay in the trial over which she is presiding. Jones faces a maximum penalty of $150 million, plus even more potential liabilities in two other defamation damages trials in Connecticut.

All of those cases by family members of Sandy Hook victims seek compensation for Jones’s since-repudiated conspiracy theories that the massacre was a “hoax” staged by crisis actors. Jones acknowledged on the stand that the tragedy was “100 percent real.”