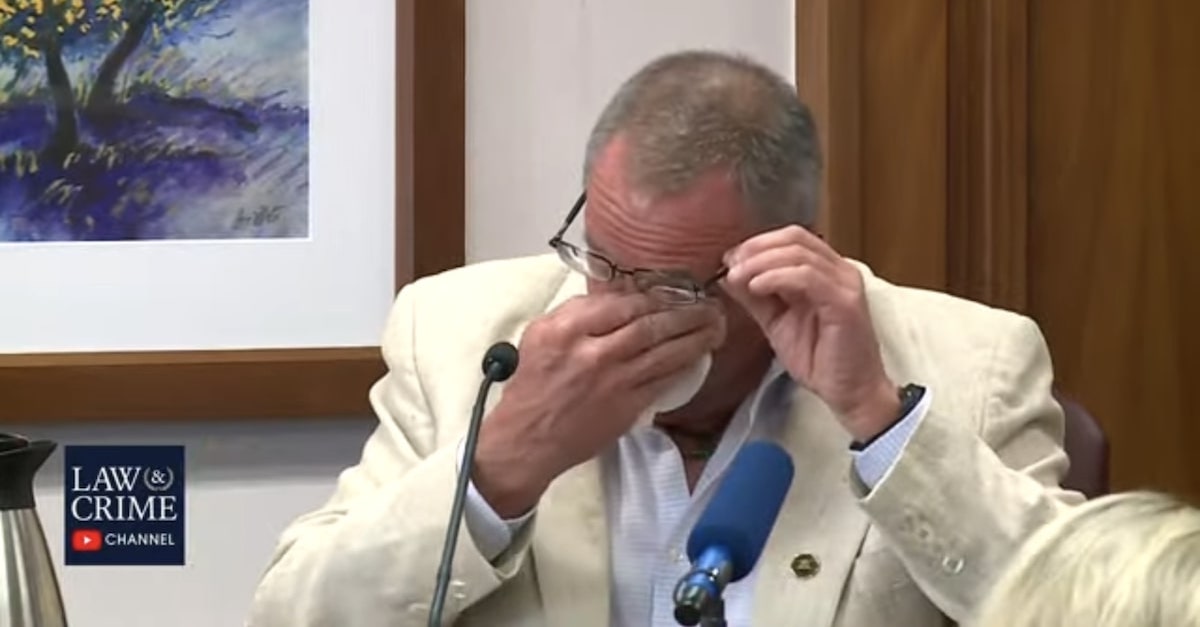 Nearly a decade after the Sandy Hook massacre, a father of one of the victims delivered tearful testimony against Alex Jones, the conspiracy theorist who profited off depicting his dead son as a “child actor.”

“He was a force like a tornado,” Heslin said of his 6-year-old son Jesse Lewis, who was among 20 of the children killed that day.

Gunman Adam Lanza fatally shot 28 people in total, including his mother at his home, 26 people at the school, and then himself. Lanza also injured two people, and Heslin recounted how his late son prevented the death toll from rising higher.

“The gunman’s gun jammed at one point,” Heslin said. “Jesse knew that. Jesse yelled for his classmates to run and they did. Nine of them are alive today because of his actions[…] Jesse died a hero.”

Throughout his testimony, Heslin spoke softly and haltingly. The father recounted how his son died two feet away from his teacher and how — to this day — Heslin carries a photograph of his child with an ear-to-ear smile, an image that his legal team displayed to the jury. 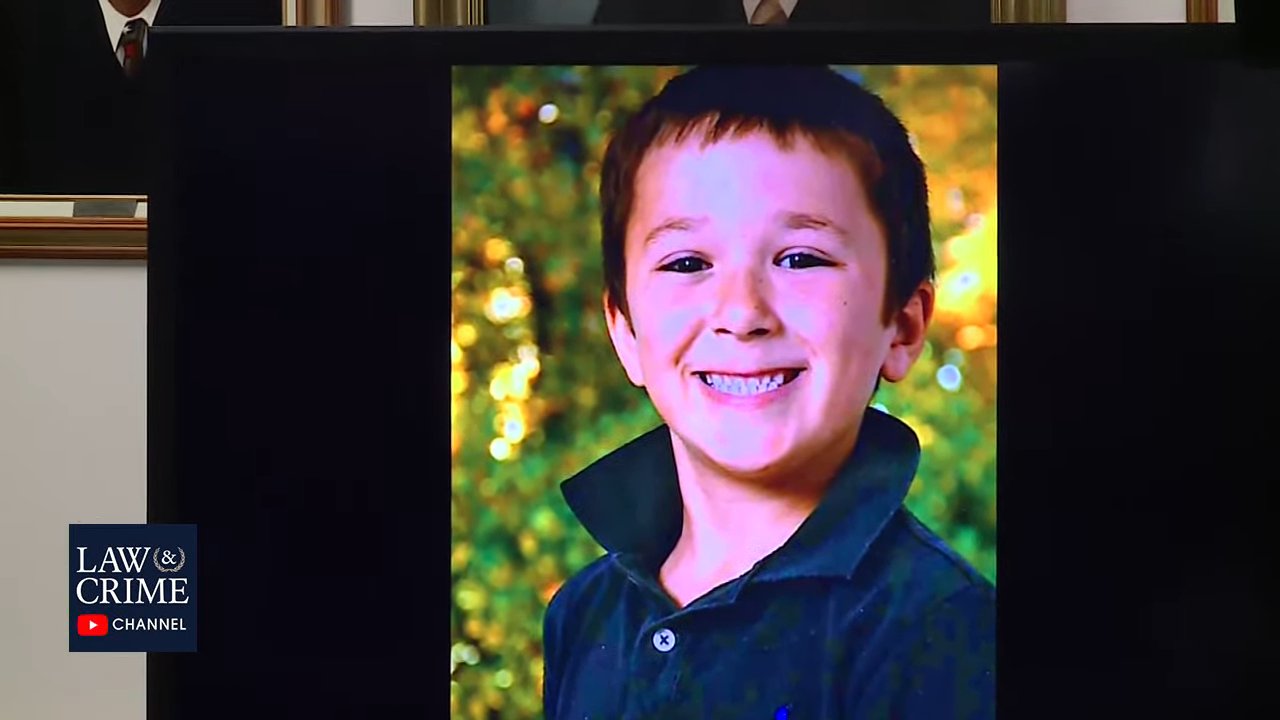 Father Neil Heslin told a jury that he carries this photo of his son Jesse Lewis, who was killed at Sandy Hook at the age of six, every day. (Screenshot via Law&Crime Network)

Together with the child’s mother Scarlett Lewis, Heslin sued Jones for defamation in Travis County District Court, and other family members of the victims filed similar lawsuits in Connecticut. Jones wound up defaulting in all of the cases for failing to comply with his discovery obligations. The ongoing trial in Texas is set to determine what he owes in damages, as Jones’s potentially crushing civil liabilities led him to file for Chapter 11 bankruptcy.

In 2017, then-NBC host Megyn Kelly gave a controversial interview of Jones, who — previously a fringe broadcaster — had been brought into the mainstream during the 2016 presidential campaign of Donald Trump. Kelly invited both Heslin and Jones on the air in an exploration of the right-wing broadcaster calling the Sandy Hook massacre “fake” and “a giant hoax.”

Heslin told Kelly at the time that it was all too real.

“I lost my son,” he said. “I buried my son. I held my son with a bullet hole through his head.”

Days later, Infowars staffer Owen Shroyer seized upon the statement to try to sow doubt on Heslin’s anguished reflections by stating that the medical examiner identified the victims through photographs, rather than in person. Heslin noted that the victims’ bodies were released to the families for funerals, and they had an open casket ceremony.

Heslin added that he “never attacked” Jones, despite his hurtful claims.

“I wished him a Happy Father’s Day,” Heslin said, calling him “lucky” to have a son with whom to celebrate it.

During his testimony, Heslin said that people shouting Jones’s name and that of Infowars shot up his home.

On cross-examination, Jones’s attorney Andino Reynal began his questioning on a note of empathy.

“As a father of a six year old myself, I am very, very sorry,” Reynal said.

Then the attorney attempted to distance his client from Heslin’s emotional pain. His questions pointed to Shroyer’s role in spreading the theories and latched upon Heslin’s testimony that he tried not to engage with Jones’s theories. 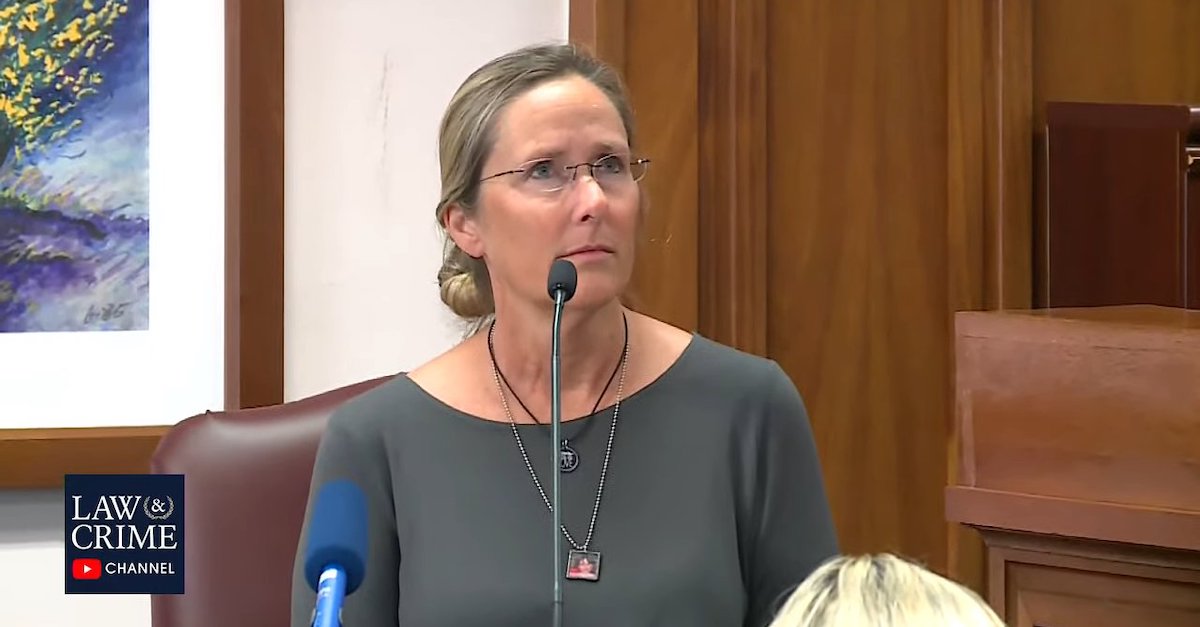 Later during the court’s morning session, mother Scarlett Lewis took the stand, and she described the “surreal” overtones that Sandy Hook conspiracy theories injected into their son’s funeral. She recounted seeing the Hell’s Angels there with “shock” — only to later learn the true reason for their presence.

“I found out later that they were there to ironically keep the peace,” she said.

She described routinely receiving “deeply unsettling” messages about her and her family, calling her a fraud, demanding a birth certificate to prove Heslin’s paternity of their child, and purporting to find the Sandy Hook children alive and singing at the Superbowl.

After lunch, attorneys for the parents informed the court that Jones insulted Heslin over the recess on the air at InfoWars — calling him “slow” and “on the spectrum.” Allowed to play the clip during the mother’s continuing testimony, Scarlett Lewis responded that the remarks were “astounding, in a bad way” and “horrific.”