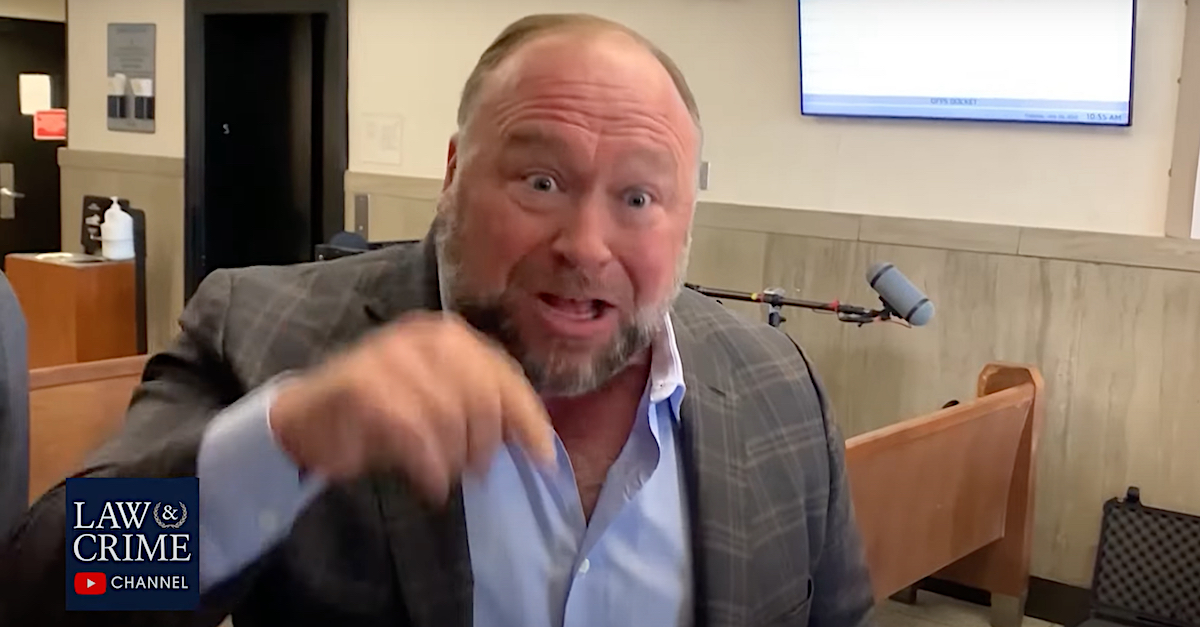 Alex Jones spoke to local reporters during his Texas defamation trial on July 26, 2022. (Image via the Law&Crime Network.)

Facing billions in liabilities, Infowars host Alex Jones has filed for personal chapter 11 bankruptcy protection on the heels of two defamation judgments connected to his broadcasts about the Sandy Hook school massacre.

Chapter 11 bankruptcy generally allows debtors to reorganize their finances in hopes of emerging from bankruptcy.

The filing, which is mostly a perfunctory form document filled with pages and pages of boxes to check, says Jones’ debts are primarily business debts and that he estimates owing money to between 50 and 99 creditors.

The filing says Jones estimates his personal assets as falling somewhere in the $1,000,001 to $10 million range. He says his estimated debts and liabilities fall within that same bracket.

Jones electronically signed the form on Nov. 30. An attached version of the signature page contains his actual wet signature.

A list of creditors attached to the filing names a litany of Sandy Hook plaintiffs and amount totaling well into the tens of millions of dollars. It also lists an American Express credit card debt of $150,000.

Another attached filing says Jones has maintained “no balance sheet, statement of operations, or cash-flow statement.”

Yet another attached document says Vickie L. Driver, the attorney who filed the bankruptcy petition for Jones, was being paid $500,000 for legal services and $48,193 to file the petition. The source of those monies, according to that document, is an entity known as “The Missouri779384 Trust.”

“This is the retainer accepted; this is not any limit or cap on the fees that will be charged in our representation of this Debtor,” the document elsewhere states.

Free Speech Systems, a company owned by Jones, filed for bankruptcy in late July while the first of two Sandy Hook defamation trials was ongoing in Texas.

A Texas jury awarded several Sandy Hook plaintiffs around $50 million in penalties. Later, in broader litigation involving a separate and longer list of plaintiffs, a Connecticut jury awarded nearly $1 billion in damages against Jones and his affiliated businesses. On top of that, Connecticut Superior Court Judge Barbara Bellis awarded $473 million in punitive damages to the plaintiffs. The sum total of the damages against Jones and his companies in the Connecticut lawsuits alone now stands at $1.44 billion, Law&Crime previously noted.

Post-verdict proceedings in the Connecticut case ground to a halt Friday morning due to Jones’ personal bankruptcy filing. A notice filed on the docket explained that the state court proceedings were automatically stayed under federal bankruptcy law.

Attorneys for the Connecticut Sandy Hook plaintiffs questioned whether post-verdict civil proceedings could continue as to the various corporate defendants Jones controls. Bellis, after concurrences from the parties, suggested it was simply better to wait. Jones attorney Norm Pattis posited that it was likely that the bankruptcy team would agree to a swift conclusion of the Connecticut case but that such a dénouement was simply not immediately possible given the automatic stay imposed by federal bankruptcy law.  Additional proceedings in the Connecticut case were contemplated for Dec. 16.

The earlier declaration of bankruptcy by Free Speech Systems only temporarily paused the Connecticut trial. Attorneys for the Sandy Hook plaintiffs criticized the maneuver as a delay tactic, and a bankruptcy judge ruled that the state court proceedings could continue in earnest while the corporate bankruptcy matter was handled elsewhere.

A long list of plaintiffs connected to the Sandy Hook massacre in Newtown, Connecticut, on Dec. 14, 2012, sued Jones for defamation and other torts over his claims that the mass shooting was a “hoax.”

The document which shut down the remnants of the Connecticut litigation is here.