‘We Don’t Want Any More Black Pastors Coming in Here’: Lawyer for Man Accused of Murdering Ahmaud Arbery Was Not Happy About Al Sharpton’s Attendance of Trial 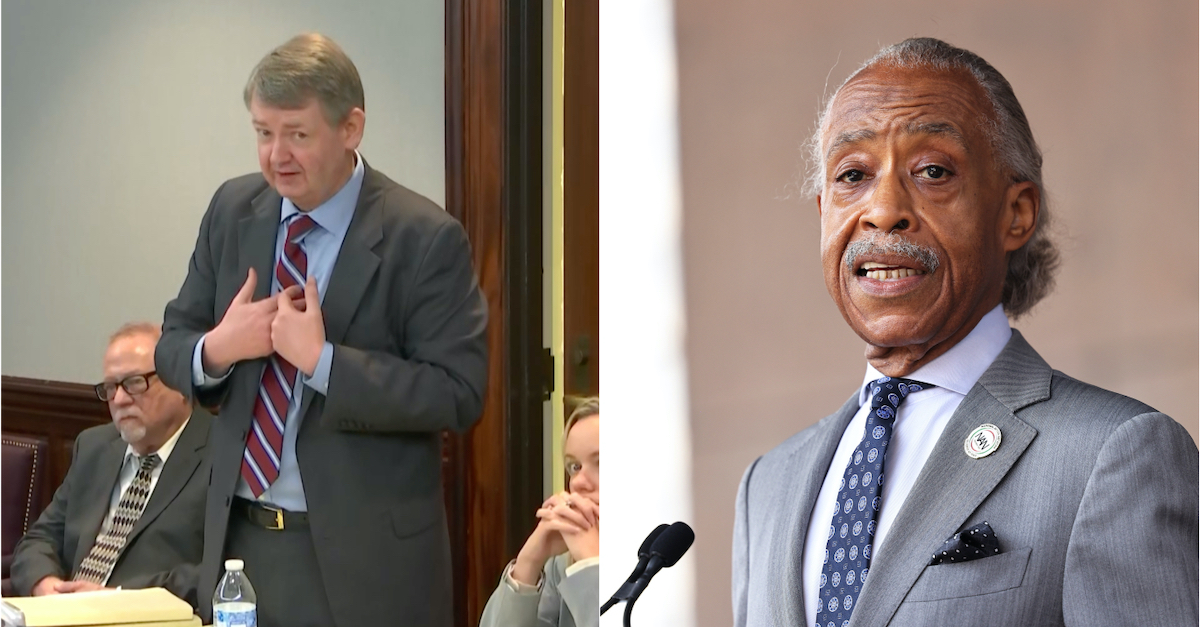 An attorney for one of the three men accused of murdering Ahmaud Arbery complained in court on Thursday about the attendance of the Rev. Al Sharpton at the trial, claiming that the presence of “high profile members of the African American community” could been seen as an attempt to “pressure” or “influence” the jury.

“Obviously, there’s only so many pastors they can have,” William “Roddie” Bryan attorney Kevin Gough said in court on Thursday afternoon. “If their pastor’s Al Sharpton right now, that’s fine, but then that’s it. We don’t want any more black pastors coming in here—or other—Jesse Jackson, whoever was in here, in here earlier this week, sitting with the victim’s family trying to influence a jury in this case.”

“I think the court can understand my concern about bringing people in who really don’t have any ties to this case, other than political interests, and we want to keep politics out of this case,” Gough added, later.  “So I’m asking the court to take appropriate steps to make sure that the gallery—which is already limited in this case—isn’t being utilized for a purpose that could be viewed as improper.”

Gough asked the judge to keep “these people” out of the courtroom, a request that was summarily denied.

“I’m not going to blanketly exclude members of the public from this courtroom,” Judge Timothy Walmsley told Gough, adding that anyone who complies with the court rules and limitations is welcome in the courthouse.

Judge Walmsley noted that even Gough acknowledged that he was not aware that Sharpton was there.

“I did not hear from anyone that there was any distraction whatsoever,” the judge said. “In fact, what I just heard is nobody was even aware that he was in here.”

The following morning, an audibly chastened Gough said he wanted to put his concerns in the “proper context.”

“My apologies to anyone who may have inadvertently been offended,” Gough said on Friday.

The exchange happened on the fifth day of the trial of three of the men accused of murdering Arbery—gunman Travis McMichael, father Greg McMichael, and Bryan—after a jury just heard testimony that was not favorable to the trio’s legal defense: The Georgia homeowner whose property the defendants claimed to have been protecting testified that he did not authorize them to confront any suspected intruder. Homeowner Larry English also testified that it was “normal” and “common” for people to have walked in and out of his construction site in Brunswick, Ga., as Arbery is believed to have done.

Unable to testify in person because of a heart-related illness, English had his previously-recorded testimony played in court via video. The jury heard these revelations during the morning session, but the comments by Bryan’s lawyer took focus during the afternoon session.

Gough’s statements were not lost upon Sharpton, either, who already started accepting media interviews about the remarks.

TMZ is interviewing me in front of NAN’s Corporate office on what the Bryan defense lawyer said about my attendance in Brunswick Georgia, at the Ahmaud Arbery trial. pic.twitter.com/BtynvBVsY0

The case’s lead prosecutor Linda Dunikoski noted that “it’s a public courtroom” and emphasized that the state of Georgia had no role in the celebrity sighting.

“The state had no part in that whatsoever. So the state is unaware of how that occurred, or how he came to be seated with the family,” Dunikoski said.

Gough then offered a curious analogy.

“If a bunch of folks came in here dressed like Colonel Sanders with white masks sitting in the back, I mean—,” Gough began to say, before the judge cut off the lawyer mid-sentence.

For Judge Walmsley, Gough’s lack of awareness about Sharpton’s presence showed that there was no distraction at all.

“If you weren’t even aware of it until later, I’m not sure what we’re doing,” Walmsley said.

Update—Nov. 12 at 11:50 a.m. Eastern Time: This story has been updated to include the lawyer’s apology the following morning.