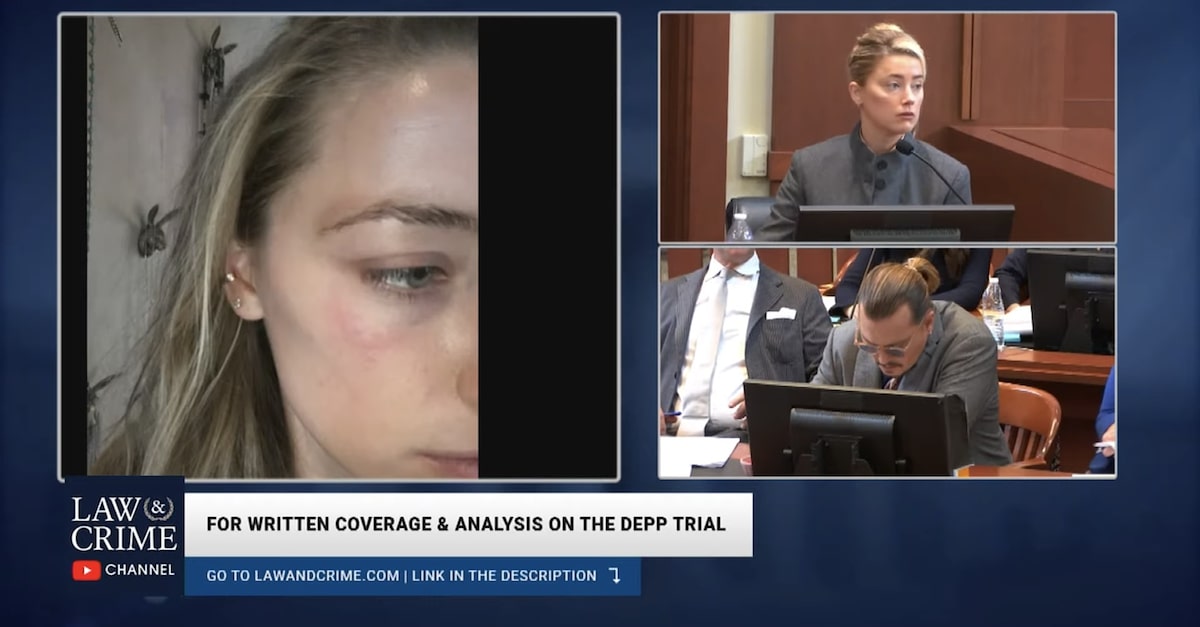 Amber Heard testifies against Johnny Depp. She claimed that the she got the alleged bruise in the photo on the left after Depp threw a phone at her.

Nearly a month ago, Johnny Depp attempted to prove that his ex-wife Amber Heard was the abuser in their relationship by playing an audio recording of her admitting to hitting him. On the tape, Depp can be heard telling her that he tried to leave the room to escape.

“I did not fucking deck you,” Heard told Depp on the recording. “I fucking was hitting you.”

On Monday, Heard told a jury that the distinction referred to the “disparity between Johnny and I in our physical fights.”

Depp would “proactively punch me, and I would have to resort to reactively hitting him,” Heard insisted.

Depp sued Heard for defamation in a courtroom in Fairfax County, Va., after she published a 2018 op-ed in the Washington Post depicting herself as a victim of domestic abuse. Printed at the height of the #MeToo movement, the editorial did not mention Depp by name but alluded to allegations that Heard made when she filed for a restraining order in 2016, some two years earlier.

Heard countersued when Depp’s attorney characterized her allegations as a “hoax.”

Depp has cited the recording of Heard acknowledging hitting him as evidence that the abuser-victim relationship was reversed. The Pirates of the Caribbean star’s supporters turned the popular hashtag on its head with one letter: #MenToo.

But Heard claims that the tape’s context supports her story.

Earlier on Monday, Heard testified that Depp slapped and choked her on a train in southeast Asia in August 2015, an alleged incident that a U.K. judge previously accepted had occurred. 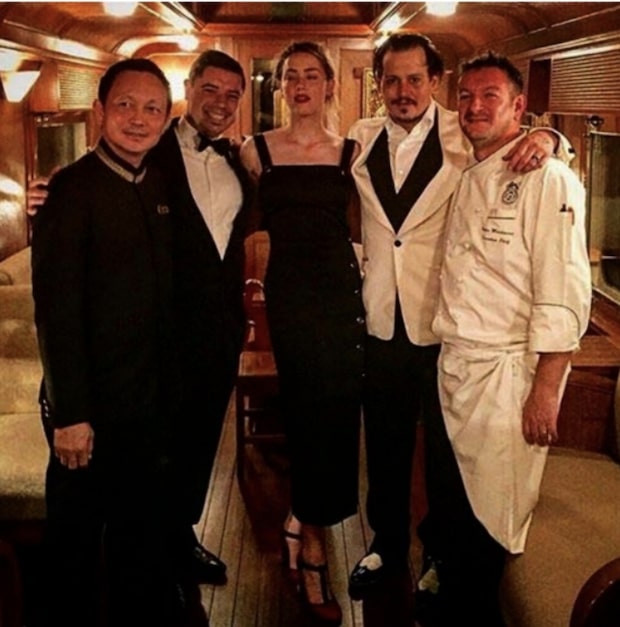 Johnny Depp and Amber Heard on the Orient Express. (Defense exhibit at trial)

Not long after that, she said, she had finished a brief honeymoon and got a job on a TV series starring actor James Franco.

According to previous testimony, Depp was jealous of the younger Franco, who was closer in age to Heard. Depp is now 58, and Heard is 35. Depp once said that Heard described Franco, 44, as “creepy” and “rapey.”

Without her knowledge and consent, Heard said, the show used a “body double” to tape a sex scene with Franco, and Depp flew into a jealous rage.

“So I have an incredibly jealous man who already is upset with me for breaking the rule that I had a sex scene,” Heard said. “On top of that, I’m telling him, it wasn’t me. I didn’t shoot that scene. And you can imagine how upset he was. [He] was irate and was calling me a liar of horror, among other things.”

At the time they viewed the screener, Heard said, the couple had been staying at a chateau in a remote part of France.

“Johnny at one point slapped me in the face in our bedroom in the chateau that we were staying in,” she said. “At another moment, he punched me across the jaw.”

About a year later, Heard said, she met billionaire Elon Musk at the Met Gala 2016.

“He seemed like a real gentleman,” she said, adding that he sat at a nearby table and the two became friends.

Heard and Musk dated shortly after her divorce with Depp.