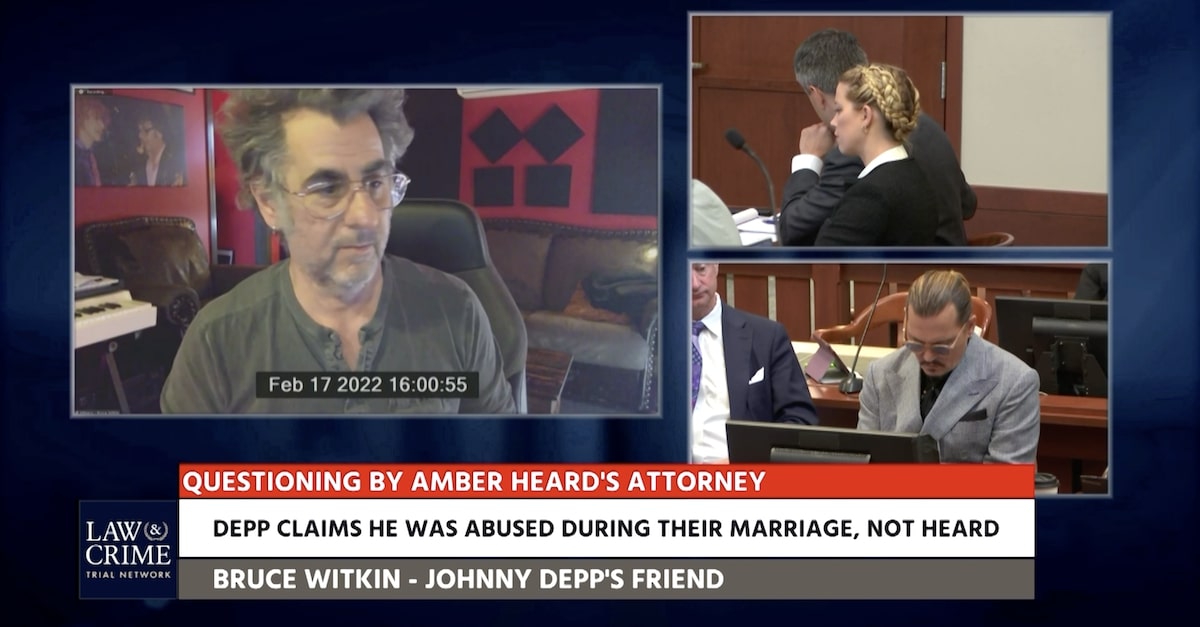 Johnny Depp’s former bandmate and friend of 40 years claimed that he saw bruises on Amber Heard’s arm, which he said looked like she had been grabbed. Bruce Witkin said that their decades-long friendship and professional relationship soured after he delivered testimony that Depp perceived as being “stabbed in the back.”

Originally recorded on Feb. 17, 2022, Witkin’s testimony was shown to a Virginia jury on Thursday, in the first of a series of video depositions entered into evidence that day. Occasionally vaping in the middle of his questioning, Witkin touched upon themes that pervaded Heard’s case: jealousy, alcohol and drug use, and apparent signs of physical abuse. Witkin acknowledged that he never personally witnessed Depp hitting Heard, but he did identify what he described a finger-shaped bruises on her arm.

“I mean, it looks similar to that, but it didn’t look like a— It looked like a grab, not a punch, like just someone grabbed her arm,” Witkin said.

The ex-bandmate emphasized that he only noticed such a bruise “one time.”

Though Witkin could not recall a time frame of the observation, he said it coincided with their involvement in a documentary about Rolling Stones musician Keith Richards. Heard previously testified in U.K. court proceedings that Depp went on a “24-hour cocaine and whiskey bender” before filming in 2013. A U.K. judge credited the allegation that Depp assaulted her during that time, but Witkin described the bruise as inconsistent with being hit.

“Like I said, it just looked like she was grabbed,” Witkin said. “That’s what it seems to be finger marks.”

Asked whether he ever spoke to Heard about the marks, Witkin said: “No.”

Witkin also said that he saw Depp with a fat lip during a rehearsal sometime around 2015 or 2016.

Depp and Heard’s brief marriage officially lasted from 2015 and 2017, when their $7 million divorce settlement finalized. But Heard filed for a restraining order in May 2016, when her domestic abuse allegations first went public.

In December 2018, Heard wrote a Washington Post op-ed that alluded to those divorce proceedings but did not mention Depp explicitly. Depp sued months later in a $50 million lawsuit alleging defamation by implication. Heard countersued for Depp’s attorney’s characterization of her claims as a “hoax.”

Before those dueling defamation claims, Witkin said, his longtime friendship with Depp ended with unexplained recriminations.

“I started to feel a distance and 2017. We had a gig, and I saw him. But he was really kind of distant and kind of fucked up,” Witkin said. “And like, he wrote me this weird text saying I stabbed him in the back and badmouth him, and I’m like, ‘What are you talking about?’ He wouldn’t explain it. And pretty much I haven’t seen him since 2018.”

He said their communications ended after that.

“I just can’t get through to him,” Witkin said. “No returned texts. No nothing. No emails. My daughter even got married, and he ignored it.”

Heard accused Depp of surrounding himself with yes-men more concerned about keeping themselves in his good graces and on his payroll than acting in his best interest. Witkin hinted at that dynamic, too.

“I think there’s some people behind the scenes talking shit about me because everybody always tried to position themselves, ‘Oh, who’s the best friend and who’s this, that,’ when I was just there to be his friend,” Witkin testified. “And I think there were some lies and all this bullshit about me that he actually believed, which is surprising.”

Outside the palace intrigue of Depp’s inner circle, Watkins said, one of the Pirates of the Caribbean star’s grievances was clear.

“I know that he wasn’t happy about my testimony, but I wasn’t going to lie,” he said.

After Witkin’s testimony, Depp’s former talent agent Tracey Jacob said in her video deposition that the actor never has been accused of physically abusing a woman other than Heard.