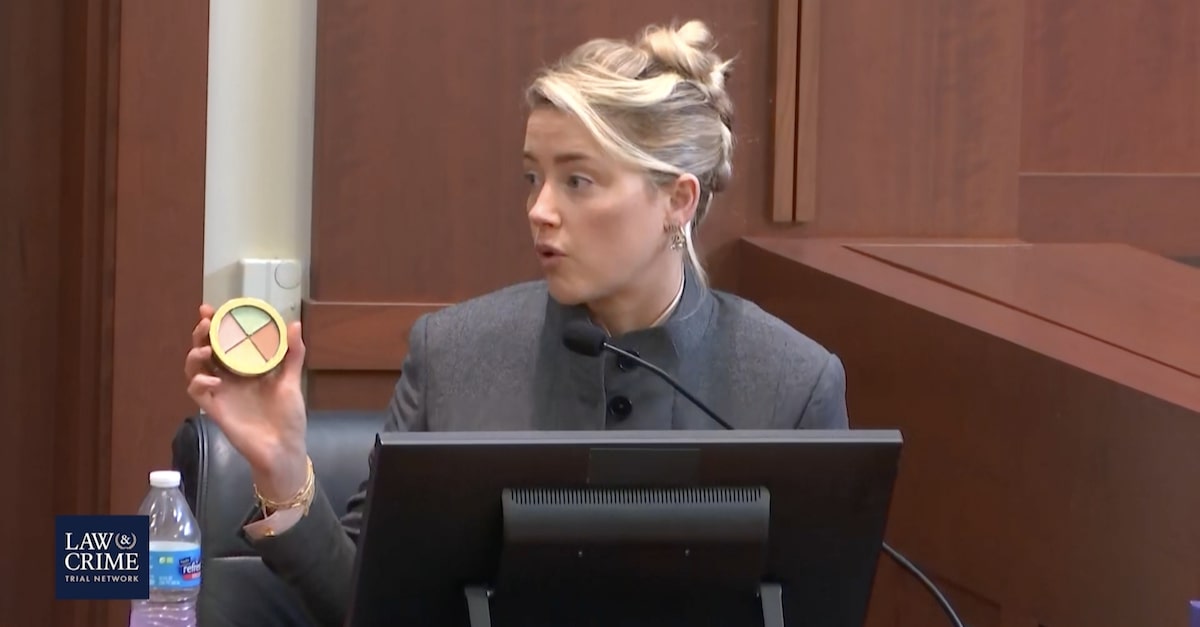 Amber Heard testifies that she used makeup to cover her bruises.

After a cosmetics company released a statement undermining her claim, Amber Heard provided a jury with day-by-day instructions about her makeup routine after allegedly sustaining bruises in fights with Johnny Depp.

“This is what I was talking about as a color correction kit,” Heard said, holding up a four-color make-up palette for the jury. “This is not obviously the exact one I used to carry, but I used to carry it with me all the time.”

When trial began, Heard’s attorney Elaine Bredehoft identified the brand in question as Milani’s Conceal + Perfect All In One Correcting Kit. The company that made it, Milani Cosmetics, took to TikTok last month to clarify that the product was released in December 2017.

The couple’s brief and tumultuous relationship lasted between 2014 and 2016, when their divorce proceedings began.

On Monday, Heard did not identify the exact brand of makeup that she used, but she described her routine in detail. Heard said that it would begin with washing her face, using tinted moisturizer and applying sunblock. Then, she said, she would turn to a kit with three or four colors.

“So the first day of bruising, […] the red is what shows up right away,” Heard told the jury. “So you want to go with the opposite on the color wheel by dabbing on a bit of the green or something to counteract the red. After a day or two, you get more purple and a bruise. So you’d obviously have to go with more of the red tones or the orange tones here.”

Heard described the second day as the “trickiest” because they bruises would have the most blues and purples—and the most “sensitivity.”

“Bruises don’t like to be touched,” Heard said. “That’s the whole point.”

Asked by her lawyer why she filed for divorce, Heard replied: “I knew if I didn’t I’d likely not literally survive.”

Throughout Heard’s testimony, she repeatedly said that Depp made her fear for her life. She also emphasized that she did not choose such a public airing of their marital turmoil.

In December 2018, Heard wrote an op-ed in the Washington Post describing herself as a domestic abuse survivor. Though the editorial did not mention him by name, Depp sued Heard early the following year, arguing that the implication was obvious. Heard countersued over Depp’s counsel describing her allegations as a “hoax.”

In one tape played for the jury, Heard urged Depp to call off what she described as a smear campaign. She told Depp that she had years of photographs documenting her alleged abuse for which she said there was no innocent explanation. No one would believe that she secretly belonged to a “fight club” or that she took those pictures of herself for years in a conspiracy to frame him, Heard told Depp.

“Our relationship was intensely passionate and at times volatile, but always bound by love,” the statement read. “Neither party has made false accusations for financial gain. There was never any intent of physical or emotional harm. Amber wishes the best for Johnny in the future.”

Heard described those remarks a vindication for what she had long argued: “That’s what I was being called at the time: a gold digger and a liar.”

The settlement included a $7 million settlement, which she pledged to two charities: the American Civil Liberties Union and the Children’s Hospital of Los Angeles. She claimed that she did this because: “I didn’t care about the money.”

Previously testimony showed that she paid only a small fraction of her donation, mostly through third parties like billionaire Elon Musk donating in her name. She insisted on the witness stand that this was because Depp’s lawsuit saddled her with legal expenses, and she said that she intended to pay the money. She also claimed that she wanted to leave Depp out of the Post editorial to protect him, but emails shown to the jury earlier in the trial showed the op-ed was heavily lawyered by ACLU staffers. One co-author said in an email that the editorial had been “neutered.”